Nikhil Chopra is a unique enactor and creator of art. His talents consist of theatrical performances during which he takes on various roles, large-scale landscape paintings, and using the body as an artistic medium. His performances are like journeys, with a beginning and an end – a journey of transformation. Here we explore the enthralling work of the Indian artist. 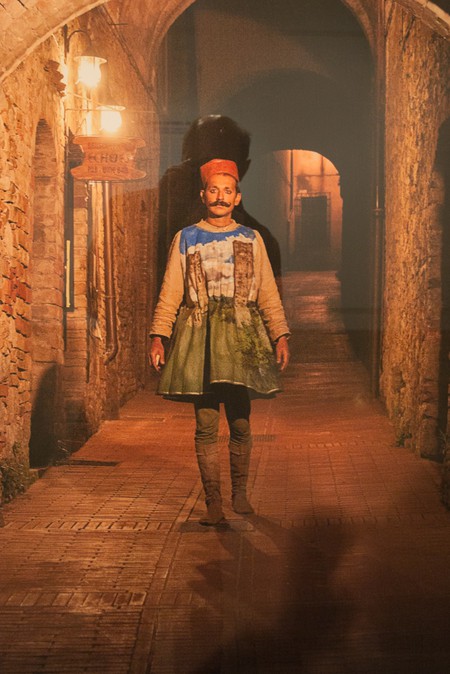 Chopra’s artistic flair is rooted in his family’s appreciation of art. The performer once wrote that his grandfather’s paintings adorned the walls of his family home and he grew up gazing at them for hours… His paintings were like windows to a time when he spent the summers with his grandparents. In fact, some of the artist’s characters are even based upon his grandfather, Yog Raj Chopra.

His many drawings and paintings have a variety of different contexts from which they were created. Sir Raja and Yog Raj Chitrakar go back to the historical times of British Raj in India. Sir Raja, for instance, portrays the ‘quintessential privileged anglicized Indian prince or king’, whereas Yog Raj is a ‘Victorian, turn-of-the-century draughtsman or landscape painter’. His longest series, The Yog Raj Chitrakar: Memory Drawing, has toured Oslo, Tokyo, Venice, New York City, London, Mumbai and many other locations, and in this series Chopra revisits all his roles varying from Sir Raja to the Queen.

Chopra’s embodiments of varied roles come out of a mental complex of identity, nationhood, gender and existentialism. His questions relating to the notion of existence led him to explore and create different personas in order to seek out an answer. Essentially the artist plays with the body – painting, shaving and dressing it, making it noticeable to the public. This concept of transforming the body into artwork is a method used to explore existential themes. 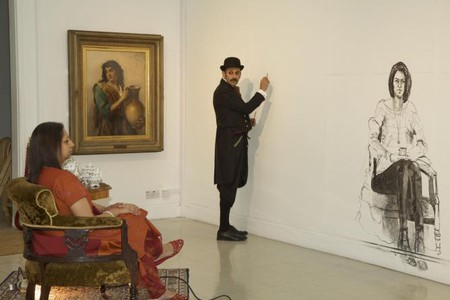 Before a performance at a particular place, Chopra takes time to go around on an observational walk. His aim is to know, explore and situate himself in that particular place, and his mantra is to travel. By exploring the wider ends of a city, he then draws it up on tall walls, wide sheets of paper or even cloth pieces, to substantiate the desire to create what he is looking at. This sets the background to his performance; for him everything is transformative.

The Artist’s Perception of Time

Chopra sees history not as linear but as ambiguous and abstract. He derives his characters from the past but at the same time gives them a new air to breathe. He places them in the contemporary moment and then plays with them.

The Mediums of the Artist

Overall his art is an amalgamation of performance and portraiture, photography and painting, sculpture and theater. Performance stands for documentation, the live event that is recorded; whereas the drawings and paintings are left after the performance for the residual effect.