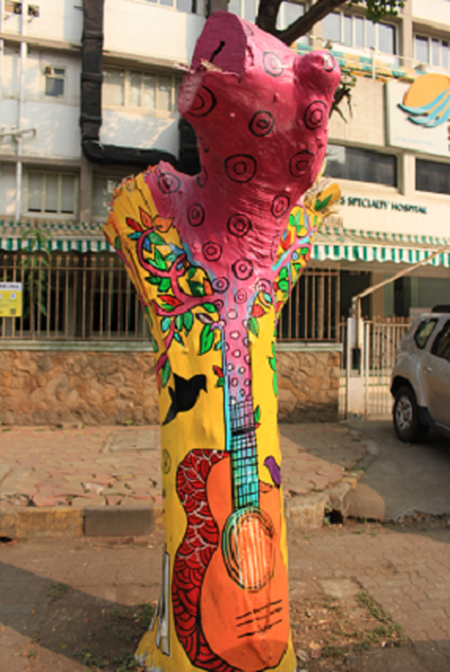 Adopting dead trees and giving them a makeover to form a community-sensitive collective is what the Rastaa Chaap initiative in Mumbai is all about.

“When I was growing up,” Sabishi Shankar says, “The rain tree canopy on Khar Danda road was so thick that you could walk down the road in the pouring rain and not get wet.”

Sabishi Shankar has a deep attachment to the disappearing trees and the action that can and should be taken to prevent them from getting sick. Now, the rain trees of Mumbai are becoming choked with concrete and catching severe infections. Their sap is sucked out of them by bugs, their bark falls off, and they die. Sabishi is a member of Rastaa Chaap, a citizen’s initiative to call attention to the rapid loss of rain trees in the city. Rastaa Chaap was started by a group of women who wanted badly for people to realise that they were walking past corpses without knowing it, and that there is an urgent need to prevent the death toll from rising.

The collective has arranged for dead trees to be cleaned and painted with a primer coat, and then lets citizens “adopt” these dead trees, and paint on the trunks. The result has been a series of lively, community-sensitive works of art, with themes relating to the environment and community and much more. 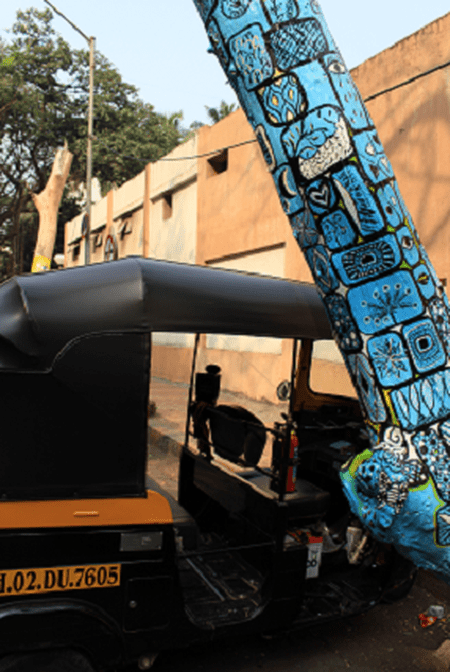 With the funding that they raise from adopters, Rastaa Chaap plans to get pesticides and neem paste that can be used to protect weak rain trees from further infection. This is especially important because rain trees have long, lateral roots and bugs can easily spread from one to the next.

The colourful trees catch the attention of passersby and are great fun to look at. Rastaa Chaap says that they wanted to add cheer to their neighbourhood, and also get the attention of the authorities and the rest of the community, but not by screaming; by “attracting attention positively.” Though it is sad that they need to be covered in paint to be noticed by many of us, the trees are, above all, a joy. They fit into their crowded landscape in a unique way. Sabishi saw me moving around the tree with my camera trying to find an angle which caught the tree but not all the parked cars around it, and she said, “Let it be. That’s all part of the cityscape. This is the context of these trees.” Rastaaa Chaap has naturalised the raintrees into their neighourhood and created a sense of community with them. 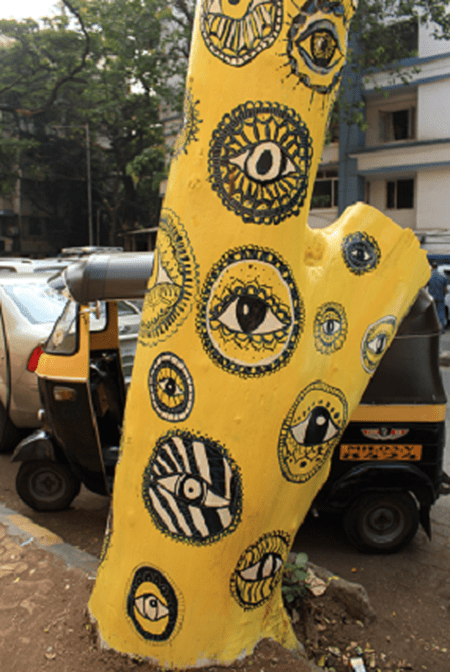 For the trees to thrive, their roots need space and embankments need to be built around them. “Now,” Sabishi says, “We’re concretising them to their trunks.” It is indeed a sad thing to see, especially through these womens’ eyes. The trunks, no matter how thick or tall, look fatigued when completely surrounded by cement. Rastaa Chaap has worked with the BMC in the past to “de-choke” the trees, supervising the workers who cleared the concrete around the trees this past monsoon.

Currently, they are in talks with a school in Juhu, whose courtyard holds three dead raintrees. The women are going to help the school administration clean up the tree trunks so that some students and the art teacher can paint the trees, with messages related to education and the environment. They are all very clear that it will be a project that the school and the students will take initiative in, only using Rastaa Chaap’s support. “We want it to be your project,” they said, “we want the students to take pride in it.” They advised the school to take ideas for the paintings from the students.

They also suggested to the administration that all the text on the painted trees could be in Hindi or Marathi, unlike the other trees they have arranged to be painted, which, wherever there is text, are in English. “Let’s keep it grounded,” they said. “Until now a lot of the things we’ve done has been in English. But our message is for everyone.”

Rastaa Chaap is made of women who love art and believe it is necessary for it to connect with people, but these women are in no way under the impression that painting dead trees is enough to spread awareness about the need to keep trees alive. Part of their work at the school also involves talking to the BMC about where to plant new trees on the school grounds, something that they have done at the first school they painted at also – Jamnabai Narsee School in Juhu. 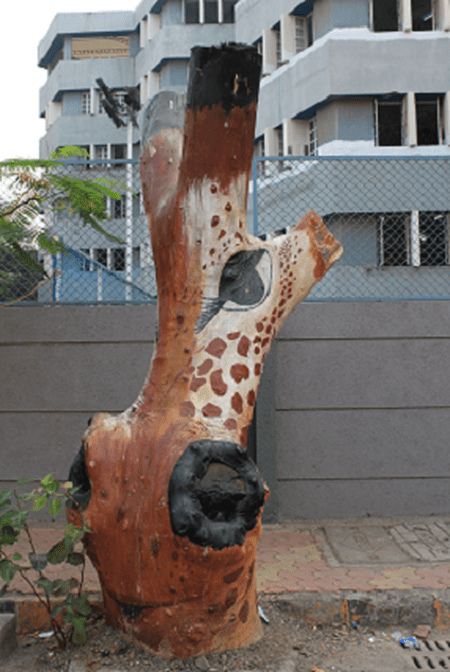 Rastaa Chaap definitely doesn’t intend for their project to be solely a beautification exercise; there is still plenty of work to do in order to prevent rain trees from dying. But they do believe the BMC also plays a very important role in the rest of this work, in whether it decides to ensure embankments when tarring roads, and routinely inject pesticides into the trees at the required frequency. Failure of both these things on behalf of the BMC has resulted in the trees catching bugs.

The women have learned a lot since their first tree, which now has a beautiful giraffe on it. They have learned how paint fades or remains, what materials to use, and when to paint. But they are open to their project, and the paintings that they have supervised, to change with time. “That’s part of street art,” Sabishi says, “It evolves.”