Bandra is an old suburb with plenty of churches hidden in its winding leafy lanes. Of those, the Basilica of Our Lady of the Mount, a Roman Catholic church situated in the area now known as Mount Mary in Bandstand, is one of the most splendid specimens of its kind. 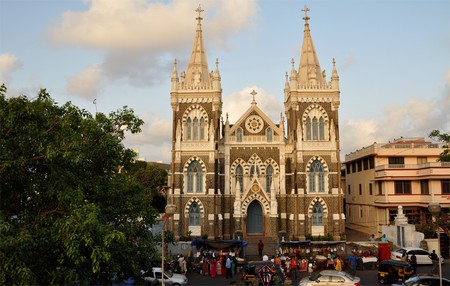 The church is on a hillock that stands 262 feet above sea level. The road that ends outside the church is lined with small shops selling candles, flowers and other offerings for worship. There are also shops full of wax figurines of human body parts and even houses or dolls. People of various faiths buy these to make an offering to appeal to the Mother to put an end to their miseries. The figurines are used to ask for specific blessings: a new home, a new car, even to ask for blessings in becoming a cricketer.

This Mother Mary is a minor basilica that is at least 100 years old. However, the origin of this basilica dates back to 16th century when a Jesuit priest wanted to construct a chapel. The original statue is from Portugal. In the 1700s, Bandra was invaded by the Muscat Arabs who, in search of treasure, plundered and looted this shrine by cutting off the right hand of the Virgin Mary – it held a gilt object. 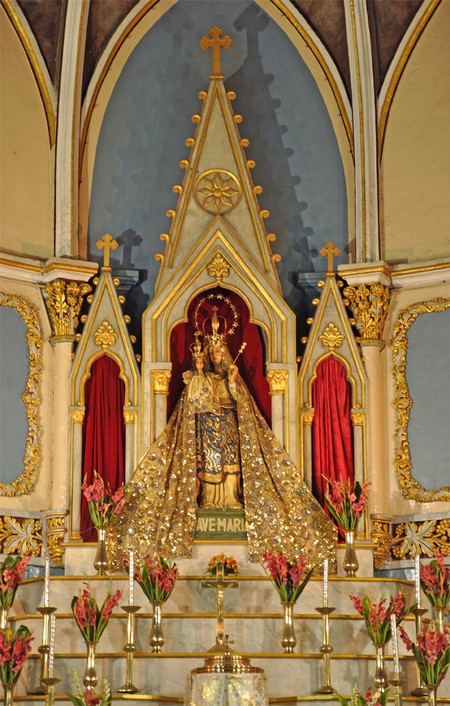 The ‘Our Lady of Navigators’ statue found in the storage of St. Andrews’ Church was substituted for a short period of time. The current statue was restored by placing a detachable child Jesus where the hand used to be. Duly returned to its original location, the ‘Our Lady of Navigators’ statue has an intriguing legend attached to it. The story goes that a Koli (fisherman) inhabitant of Bandra dreamt about a statue floating in the sea – a statue called ‘Mot-Mauli,’ or Pearl Mother. 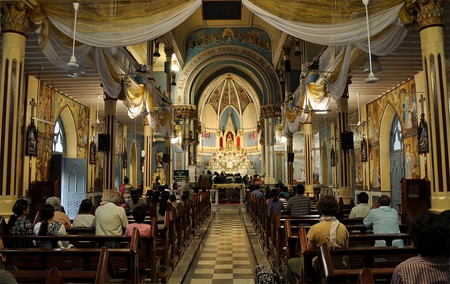 The magnificent interiors of the Basilica | © Flickr/Ifordetail

Once inside the church, we see this magnificent statue of the Mother and Child. The open doors from either side bring in the salty and cool sea breeze, and whether you’re here for faith or not, you can count on leaving with a refreshed spirit.

Maybe the history of the statue, which has undergone several restorations, makes the Shrine an appropriate place where hopes of the masses can be fortified, especially during the trying times in their lives.

The Mount Mary is a must-visit if not out of belief, then to appreciate the semi-Gothic architecture and the openness of the Basilica rendered unique due to its location. There is a Feast of Mount Mary every year on the first Sunday of September, which is also celebrated as the birthday of the Virgin Mary. The Feast is followed by the Bandra Fair, which is held for a week. It has small-town charm where one may find stalls selling roasted gram (chana) and other sweets and snacks. The entire street is decorated with buntings, and it feels festive, especially due to the camaraderie of the people from the church seeking relaxation. The streets are abuzz as lots of devotees, as well as the general public, try to enjoy the activities at the fair. Over the years, the fair has gathered lots of significance, and due to large numbers of people attending, the church, along with the local custodians of law and order, efficiently manage it.

This is the face of Bandra: rich in history and culture, a contrast to its glamorous and hip image in the minds of many. It is highly recommended for all those who like to plunge deeper into the local flavor and relish its essence.