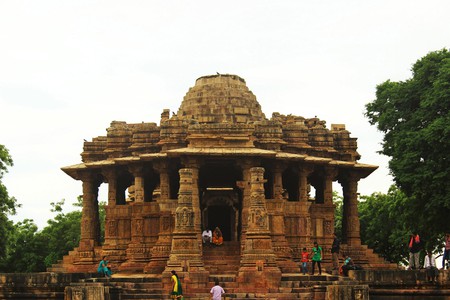 Gujarat has lots of hidden gems to offer travelers, tourists, history seekers, and architecture enthusiasts. Thanks to the efforts of Prime Minister Narendra Modi (back when he was the Chief Minister), many of Gujarat’s lesser-known attractions have come to the forefront of the tourist circuit.

The Modhera Sun Temple, located in Gujarat, is dedicated to the Sun-God, or ‘Surya.’ It is an architectural achievement maintained by the Archaeological Survey of India (ASI). With its intricate carvings and the splendid rectangular step-well, Surya Kund, the structure is beyond grand. Although it is a temple, it is not currently used as a place of worship.

The temple was built in the 11th century by Bhimdev of the Solanki dynasty in the honour of the Sun God, because Solankis considered themselves to be the descendants of ‘Surya.’ The sanctum used to seat a bejeweled gold idol of the Sun God. During this time, Somnath faced multiple attacks from Mahmud Ghazni. Being in the same region, the gold idol of Modhera’s Sun temple was looted away by Mahmud Ghazni during one of his attacks on Gujarat.

The interior of the temple consists of an inner sanctum. The temple exterior is beautifully carved, with images of various deities. There is a ‘Sabha Mandap,’ or hall for gatherings. It is a hall with 52 pillars representing the 52 weeks in a year and it is etched with images representing stories from the Hindu epics Ramayana and Mahabharatha. The sun’s rays rest on the gold idol inside the inner sanctum during sunrise. 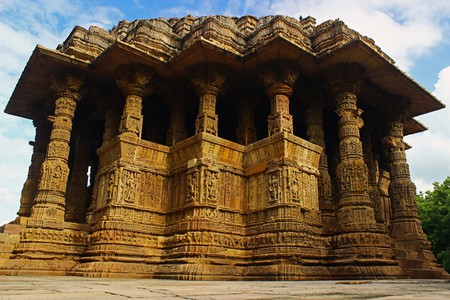 The ‘Kund’ is a rectangular step-well measuring 53.6 X 36.6 meters. The main purpose of the step-well is to store water and perform ceremonies for worshiping the Sun God. The step-well in itself is an example of beautiful architecture, with its symmetric natures and carvings. The numerous patterned steps are an amalgamation of art and architecture, forming both a visual delight as well as a series of steps for deities to reach the well water. 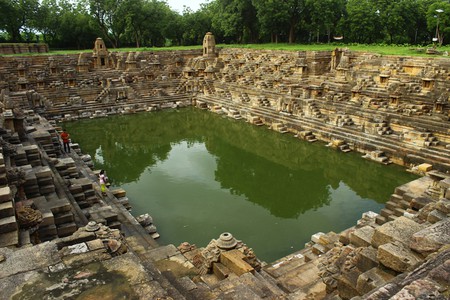 The step-well consists of small temples and deity figures sculpted at the center of the top edges. There are supposed to be 108 small shrines all throughout the steps in the tank. The gods and goddesses adorning the steps of the tank include Lord Ganesha, Lord Vishnu, and other locally worshiped forms. 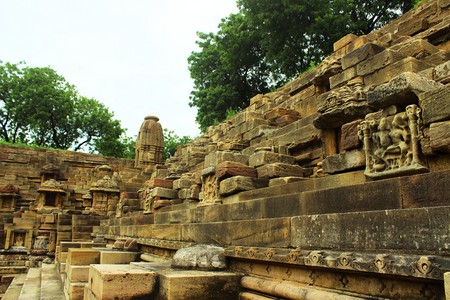 The Modhera dance festival takes place every year near the Sun temple, during the month of January. It coincides with the popular Gujarati festival of ‘Uttarayan’ and is celebrated for three days. Organized by the Tourism Corporation of Gujarat, it celebrates the architectural grandeur and rich cultural heritage of the region. 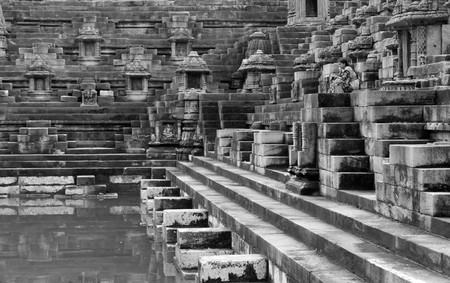 Tip: When in Modhera, plan a visit to Patan, which is popular for its (extremely expensive) Patola sarees.
By Purba Mazumdar

Growing up in India, her travel enthusiast parents fueled Purba’s love for discovering new destinations and cultures. Now she and her husband team up to keep their life-long exploration dreams alive.
She has traveled to 14 countries across 5 continents. She and her husband share their travel stories at:
http://fourblissfulfeet.com | www.facebook.com/fourblissfulfeet | www.twitter.com/4blissfulfeet