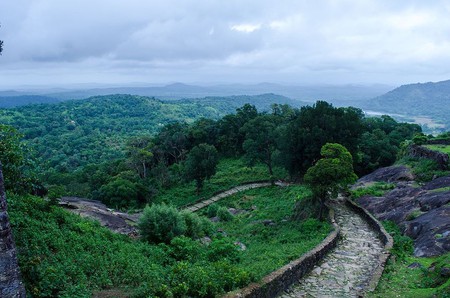 In the Western Ghats near Karnataka, at a prodigious altitude of 1,541 meters, lies the majestic Kavaledurga Fort, a truly beautiful landscape of mountains, forest land and rivers. The best way to explore this scenic environment is via an uphill trek, which isn’t an easy one, but the gorgeous views and abundant natural beauty make it worth the effort. Here’s everything you need to know about this incredible hidden gem.

Located approximately 11 miles from the town of Thirthahalli in the Shimoga district of Karnataka, the Kavaledurga Fort is a stunning site wrapped in tales of a bygone era, which makes it a must-visit for history buffs. Plus, owing to its location on the top of a hill amidst the rolling hills and lush jungles, it is a paradise for adventure enthusiasts looking for high altitude kicks.

Established in the 9th-century, the Kavaledurga Fort over the centuries has witnessed the reign of different rulers – from the Cheluvarangappa (king of Belagutti) in the 14th-century who renovated it, to the Nayakas of Keladi in the 16th-century, who fortified the fort by building seven bastions, and further in 1763, the fort was occupied by Hyder Ali and Tipu Sultan. Each ruler added some unique architectural elements to the fort, which remain evident in the modern day.

Today, the fort lies in ruins, but continues to stun visitors with its exceptional architecture and historical vibe. With a backdrop of the Western Ghats and surrounded by lush greenery, the fort is constructed of granite blocks, complete with nine to 12 meters high fort walls and seven levels with a gate at each level. Within the fort were originally 15 temples, of which only three are left. Besides this, there are remnants of a forgotten era, including stone artefacts, and ruins of a palace, stables of horses and elephants and other relics.

According to legend, many sages did penance on the hills surrounding the fort. In Hindu mythology, this spot was called as Parashuram Kshetra, which gained prominence in the Krita Yuga. It is believed that sages Valmiki and Agastya lived here for a while. Also, legend has it that the Pandavas stayed here for quite some time during the Dvapara Yuga. All this contributed to its popularity among those seeking spirituality and peace of mind.

The trek to Kavaledurga Fort

You can take a cab or bus from Thirthahalli, or drive yourself to the trailhead for the fort hike, i.e Kavaledurga. The trek is best described as moderate, and can be done on your own or with a guide. The hiking route is short, and is accessible by stairs, with swathes of scree, which makes the trek strenuous. However, there are changes in the ecosystem along the way, from lush jungles to scenic mountains, which makes it all the more worthwhile.

It takes around three hours or so, with brief intervals in between, to reach the summit of the fort, which is set atop a hill. Aim to be at the hilltop during sunset as the views are breathtakingly beautiful and will leave you awestruck. Do not forget to take your camera!

With a circumference of eight kilometres, the fort covers a considerable area. At each gate (total, seven levels), you will be treated to immense beauty and the relics of the bygone era. The third gateway leads you inside the precincts of the Kavaledurga Fort. As you enter the fourth gate, you will come across the ruins of ancient temples, including the Kashi Vishwanath Temple that stands out with its intricate carvings of the armed warriors, the sun and the moon, birds, elephants and snakes on the outer wall; the Lakshminarayana Temple, which is a small shrine resting on a weathered rock, amidst the lush greenery; and the Shikareshwara Temple. 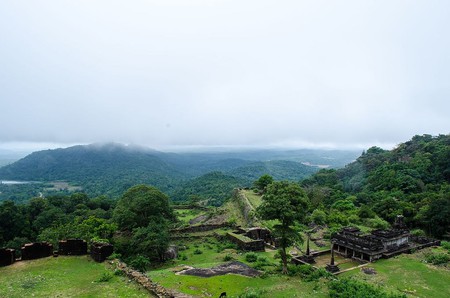 Further climbing uphill, you will find stepped wells and stone artifacts, including the statue of Nandi. As you move further, you will encounter ruins of a palace, complete with about 1,000 pillars, courtyards, verandahs and swimming pools.

As you reach the summit of the magnificent Kavaledurga Fort, you will be greeted with the jaw-dropping vistas of the Western Ghats and the Varahi and Chakra Rivers. Within the precincts of the Kavaledurga Fort also lies the beautiful water channels, as well as a cave with a pool of fresh water, which is called ‘Gadaa Theertha’ as it is said to be dug by the gadaa (mace) of Bheema from the epic poem, Mahabharata.

Pro tip: Pack water bottles and energy bars to take with you. Be sure to wear sturdy trekking shoes!

The palace of thousand pillars! #nammakarnataka

Accommodation: There is no stay option available in Kavaledurga. Visitors can stay at Thirthahalli, Shimoga or Agumbe, which are close by.

Best time to go: You can trek to the Kavaledurga Fort all year-round, however, the best time is between August and April.