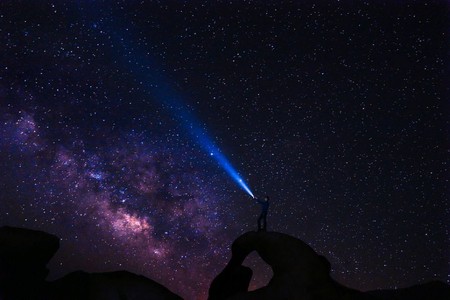 With the city skies shrouded in air and light pollution, getting the perfect glimpse of the starry sky can be challenging. If you’re craving an unobscured view of the night skies, speckled with zillions of bright stars, head straight for the ‘Astro Resort’. India has pioneered the ‘Astro Resort’, named Astroport Sariska where uninterrupted stargazing is guaranteed.

Founded and created by ardent astronomer and wildlife enthusiast, Sachin Bahmba, the ‘Astroport’ is located about 5 kilometres (3 miles) away from the Sariska National Park, near the Aravalli Range in Alwar District of Rajasthan, overlooking the historical Tehla Fort. This astronomy resort is nestled in a place labelled the second darkest site in India, along with having the least polluted air, thus making it a go-to destination for stargazing and night-time photography. The resort is easily approachable via the roads from Jaipur, Agra and Delhi (India’s Golden Triangle).

According to its Facebook page, Astroport Sariska touts itself as the first Space and Astronomy themed resort and adventure center in South Asia and India. This is a place where you can experience the breadth of the universe, amidst a lovely setting, whilst enjoying delicious organic food.

This is where I spent my weekend. Disclaimer: I did not take the photo, but it is from Astroport's website. But it pretty much looks exactly like this. The sky – dotted with millions of stars (which , as I found out is a mix of stars, clusters, deep sky objects, meteors, dying stars, planets etc) . The cloudy patch on the right is our milky way. I also learnt that JK Rowling named Sirius after the brightest star in our sky. It sort of forms a jewel in a make belief dog's collar which is obviously made up of other stars. And since Sirius as an animagi knew how to turn himself into a dog, this is pretty cool. (Also, Andromeda, Draco, Bellatrix, Luna are all names taken from the stars. JKR, good one!) I think this has been one of the best weekend trips so far where I have done things I wouldn't have otherwise done and once again been reminded by the universe how insignificant we or our troubles are in the larger picture . Much larger picture. Might be in love with the sky for some time. Credit: awesome photographer at Astroport

One of the main activities at the astronomy resort is obviously the evening and night sky observation. This place is fully equipped with cameras, telescopes and binoculars to give the best possible experience of the pristine night skies.

Trained educators/guides are on hand to give a detailed tour of the celestial bodies and help visitors catch a glimpse of everything that streaks across the night sky using astronomy equipment and sky charts. Edutainment sessions on zodiac, telescope making and astrophotography add to the experience.

During the daytime, visitors can indulge in a wealth of activities, like jungle safari, rock climbing, wildlife photography, bird watching, nature trekking, an organic farm tour, pottery, horse riding, aerobics, yoga or a cycling tour to nearby historic sites, including Ramgarh Lake and Bhangarh Fort. At night-fall all eyes turn upwards to the star-studded night skies.

Away from the noise, light and air pollution, three kinds of luxurious yet eco-friendly stay options are available here – pitchable tents, which costs INR 5,400 per night ($83 per night), the Swiss tents with en suite bathroom called ‘Galaxia’ that can accommodate four people, and cost around INR 13,000 per night ($200), and the third one is ‘Nebula’ which can accommodate eight people and costs up to INR 20,000 ($ 308). Other amenities include fresh organic food from the in-house organic farm, dining hall, and swings on the lush green lawns. There is also a swimming pool, which is currently under construction.

**The prices include meals and awe-inspiring views of the inky night dotted with gazillions of stars. 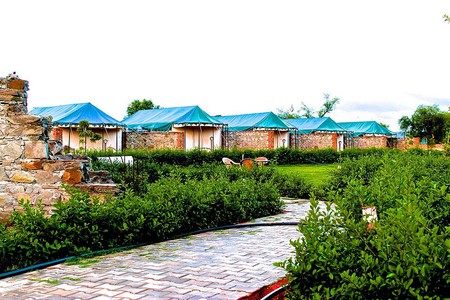 Stargazing in the lap of mother nature, accompanied by an orchestra of diverse wildlife and the melodies of birds – who could ask for more?