How to Spend 48 Hours in Kolkata, India 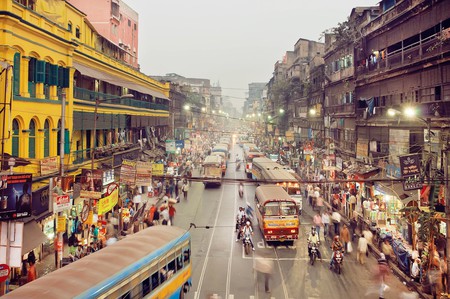 Kolkata has a density of 814.80 vehicles per km of road length | © Radiokafka / Shuttertock

In Kolkata for just 48 hours and overwhelmed by the endless lists of historical sites, cultural spots and attractions you’re expected to cover? Fear not, for our handy guide will help you squeeze in the very best of what the City of Joy has to offer into a two-day itinerary. Covering historic monuments, famous markets, spectacular restaurants and more, this itinerary will take you through South and Central Kolkata on day one, and Northern Kolkata on day two.

Start your morning with a stroll through Kolkata’s historic South Park Street Cemetery. Featuring tombs with stunning Gothic and Indo-Saracenic architecture, the cemetery dating from 1767 is one of the oldest non-church cemeteries in the world. After you are done visiting this unique historic site, you can continue strolling westward on Park Street—one of the city’s most iconic and dynamic streets—for about twenty minutes and grab breakfast at Flurys, a famous tearoom established in 1927. After you are done with breakfast, head over to the nearby Indian Museum for a satisfying dose of Kolkata and India’s rich social, political and cultural history.

Less than a 10 minute walk from the Indian Museum are two legendary Kolkata restaurants for you to pick from for lunch. Kasturi Restaurant serves some of the city’s most delicious authentic Bengali meals at very affordable prices in a no-frills setting, while Peter Cat serves lush North Indian food at moderate prices. Post-lunch, you can head back west to the Maidan, Kolkata’s largest and most iconic public open space. The vast, lush green grounds of the Maidan are where most Kolkatans in the area come to wind down and engage in recreational activities. However, the Maidan also hosts multiple major historic attractions including the Shaheed Minar, the Victoria Memorial and Eden Gardens.

One of the best ways to spend your first evening in Kolkata is to head to the iconic New Market, just minutes away from the Maidan’s northern part. Founded in 1874, the market has survived two major fires and several instances of flooding and still remains the city’s most famous and popular. With over 2000 stores selling a wide range of items, and several places selling local cheeses, street snacks and baked goodies, you will be entertained all evening. Once you’ve gotten enough of the market, you can satisfactorily wrap up at one of the city’s most popular rooftop bars—Blue and Beyond Rooftop Restrobar. The bar’s stunning view of the Hooghly River and the Howrah Bridge looming at a distance will serve as your much deserved reward for powering through day one of your Kolkata adventure.

Start your morning at Kolkata’s historic Old Chinatown for a hearty street-side breakfast of momos (dumplings), sausages or rolls. Also known as Terreti Bazar, this is the only Chinatown in India and one of the best spots to experience the rich cultural legacy of Kolkata’s centuries old Chinese-Indian community. Once you’ve soaked in a satisfactory dose of this vibrant neighbourhood, grab a cab and head further north to the city’s most iconic structure—the Howrah Bridge. As one of the world’s busiest bridges, this is an excellent spot to people-watch while sipping hot tea. The adjacent Mallick Ghat Flower Market is yet another vibrant and unique Kolkata experience you ought to have.

Once you’re done with Howrah Bridge and its surrounding areas, you can catch a cab and head further north—deeper into historic North Kolkata, famous for its iconic narrow lanes and century-old buildings. Head to Kumartuli, Kolkata’s historic potters’ colony for a stroll through narrow streets lined with stores where you’ll find artists working on all kinds of clay sculptures—often of Hindu gods and goddesses. For lunch, head to the famous Golbari restaurant at nearby Shyambazar for Kosha Mangsho or traditional mutton curry.

Once you’re done with lunch, head back south to visit the Rabindra Bharati Museum, the ancestral home of Rabindranath Tagore—one of the most important figures in Bengali and Indian literature, as well as the first non-European Nobel laureate. The museum will delight any fan of history, literature or art, and give you a taste of yesteryear’s Calcutta.

The best way to wrap your second evening in Kolkata would be to head to College Street, Kolkata’s legendary used-books market area—the second largest of its kind in the world. Housing multiple historic bookstores that may carry rare and first edition copies of your favorite books, the dynamic area is a reminder of the city’s rich literary and intellectual past and culture. When you are seeking a break from browsing through books, you can head to the famous Indian Coffee House for a coffee and a taste of Kolkata’s coffee house culture. There are plenty of dinner options in the area, but if you are overwhelmed you can head to the multi-cuisine Food Station for outstanding Indo-Chinese, North Indian, South Indian or Bengali fare.