How to spend 10 days in Madhya Pradesh, India 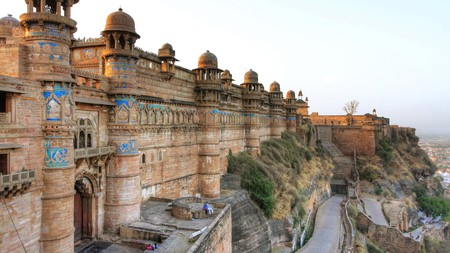 A 10-day trip allows you to visit many of the highlights of the central-Indian state of Madhya Pradesh. Here is a suggested itinerary.

Though most visitors to India will head straight to the Golden Triangle of Delhi, Jaipur and Agra, the country has so much more to offer. The often-overlooked central state of Madhya Pradesh has some amazing things to see, from a “hidden” town on the banks of the Betwa River, to Kanha National Park’s tigers.

After checking into your hotel – Ivy Suites, a charming boutique B&B, and the top-end Noor-us-Sabah are both good options – take a train, bus or taxi to nearby Sanchi, a remarkable Buddhist temple that dates back to the third century BC.

Afterwards, travel back to Bhopal and explore the old city, home to the busy streets and colourful shops of the bazaar. Bhopal has several impressive mosques including the vast Darul Uloom Tajul Masajid. For dinner, sample some tasty kebabs at New Inn, an economical restaurant in the New Market area, or enjoy the views at Wind and Waves, which overlooks the Upper Lake. 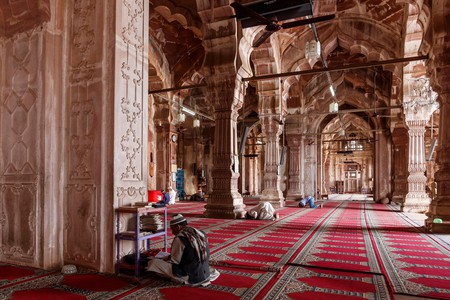 Take a morning train to Jhansi and then a bus, auto-rickshaw or taxi to Orchha, one of the most beguiling places in central India. On the banks of the Betwa River, this slow-paced town (whose name translates as “hidden place”) has an array of crumbling, forest-shrouded palaces, fortifications, temples, cenotaphs, tombs and gardens. The best place to stay is the Sheesh Mahal, a 19th-century palace that has been turned into a hotel by the state tourist authority.

Over the next day and a half, explore Orchha’s many historic monuments; the key sites are illuminated during the nightly sound and light show. There are several friendly traveller restaurants dotted around town, though the most elegant place to eat is the Sheesh Mahal, which often has live music and dance performances. 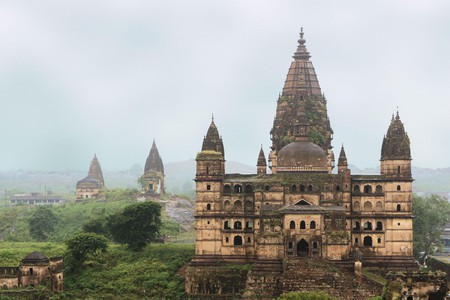 Khajuraho village has a wide range of guesthouses and hotels suitable for travellers of all budgets; Hotel Surya and Lalit Temple View are both solid options. Its popularity as a tourist destination means there are also plenty of good restaurants. Among the highlights are Mediterraneo, which offers authentic pizza and pasta, and Raja Café, whose menu features well-prepared dishes from across the globe. 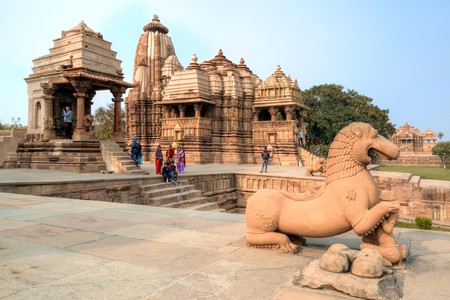 Travelling from Khajuraho to Kanha National Park is a bit convoluted, but the chance to explore Madhya Pradesh’s premier tiger reserve means the hassle is more than worth it. Get up early, take a taxi to Satna, and then a train to the regional city of Jabalpur, where you can stay the night at the comfortable Kalchuri Residency or the smarter Narmada Jacksons. Dining options beyond the hotels are relatively limited, but the Indian Coffee House in the city centre is a decent option.

Take an early bus or taxi from your accommodation to Kanha National Park, where idyllic woodlands, meadows and savannah are home to approximately 75 tigers, as well as numerous other species, such as wild dogs, barasingha deer, sloth bears and langur monkeys. Tourists can explore the park on morning and afternoon jeep safaris (known locally as “game drives”) where tiger sightings are common.

Meanwhile, the surrounding buffer zone is ideal for guided nature walks. Easily the best place to stay in the Kanha area is Shergarh, a gorgeous luxury camp surrounded by tranquil gardens. Budget travellers should try the Pugmark Resort. 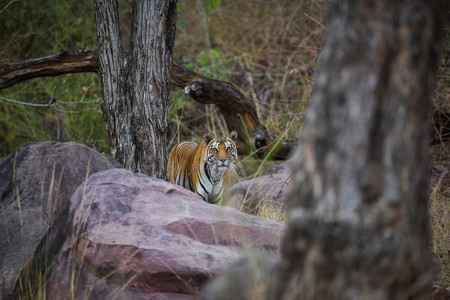 After another morning game drive in the park, take a bus or taxi to the regional city of Jabalpur, where an overnight train departs for Madhya Pradesh’s industrial hub, Indore. After arriving in Indore, drop your luggage off at your accommodation – try mid-range Ginger or the fancier Lemon Tree – and take a taxi or bus to Mandu.

Set on a rocky plateau, this Medieval city’s ruined palaces, mosques and mausoleums make it an incredibly evocative place to explore. In the late afternoon, head back to Indore for dinner at Hotel Shreemaya.