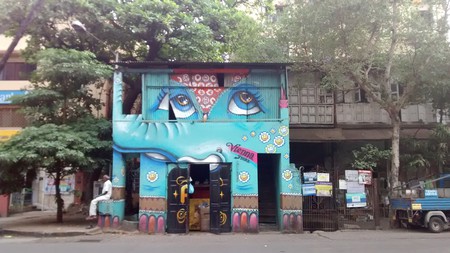 For some time now, our life in Bandra has been brightened by interesting graffiti; we notice their colorful and interesting themes on our morning walks, our drives, our search for auto rickshaws, our strolls through gaothans (mini villages within Bandra). But we are guilty of letting these artworks remain in the background while we go about living life without stopping to smell the flowers (read: admire the graffiti). Last Sunday, we decided to go for a ‘Graffiti Walk’ through Bandra, stopping to admire the art that we pass by quite often, and in the process even bumped into others we hadn’t noticed. 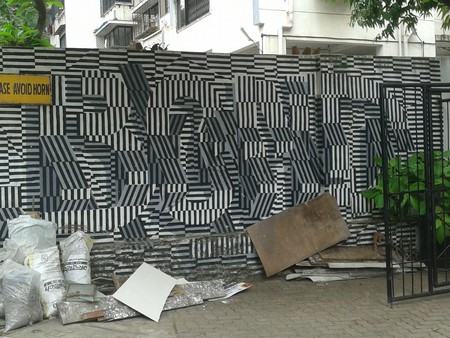 On a comfortable winter afternoon, we began our journey from Mount Mary hill and walked down the (extremely steep!) slope towards bandstand to encounter this stylish, slightly psychedelic black-and-white 3D graffiti that is a tribute to the English Secret Service agent we have loved for many years (and movies). We then walked back up this slope and down the other side of Mount Mary Hill using the Mount Mary Steps, and continued walking towards Lilavati Hospital. We turned left after the Bru World Café on St John Baptist road, and once again admired this beautiful graffiti reminiscent of Salvador Dali’s work, filled with intricate symbolism. 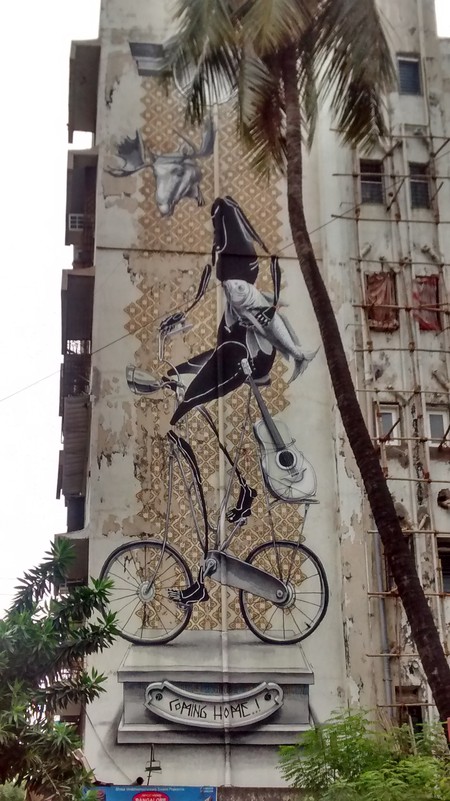 We attempted to understand the symbolism of the various elements brought together to create this Dali-esque masterpiece. The tagline ‘Coming Home’ indicates that the graffiti is meant to represent the rich culture that Bandra boasts. The guitar and the fish are definitely elements that represent Bandra, but we were a little unsure about the other elements and decided to instead just admire the spectacle. We then continued walking on Chappel road in order to attempt to understand and capture this image on the wall of a school: 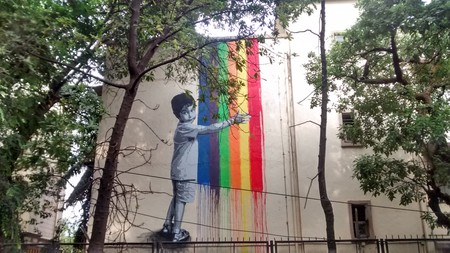 This graffiti captures the innocence of childhood beautifully through the facial expression of the child. It also portrays the child playing a colorful ‘musical instrument’ with the hues dripping away endlessly. It almost seems like the instrument represents life with its various positive and negative elements, indicated by the different colors. The child, kept black-and-white, brings ‘color’ into his life through his various positive and negative experiences.

While admiring the child graffiti, one should not miss this artwork on the wall of the house in front. The bright designs and the intricate work are really eye-catching! 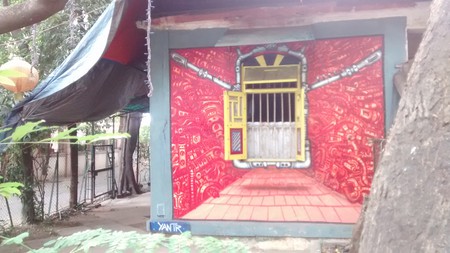 Graffiti on the wall of a bungalow in Chappel Road

Later, walked through one of the little by-lanes behind the school and entered Ranwar village, which is an old East Indian Catholic village with beautiful little bungalows and lanes that transport you to another world (literally, you sometimes can’t be sure of where the winding lanes lead up to). After walking through some lanes aimlessly, we landed on Veronica Street, next to Jude Bakery. Although this bakery is now shut, it is decorated with the most colorful graffiti, a mix of multiple images. You can also see in this image (top left) that a play was held recently in this bakery as part of the Bandra festival. 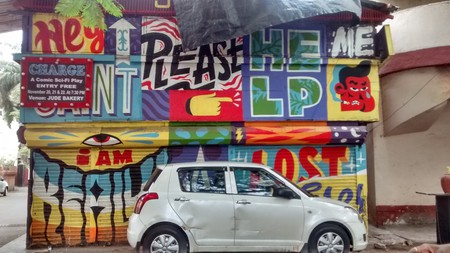 In order to access Hill road from Ranwar village, we walked through a little street opposite Birdsong Café, which is a delight since it is almost like walking through a graffiti tunnel! The walls of this lane seem to have been used as a means of expression by various artists, beginning with this colorful lady… 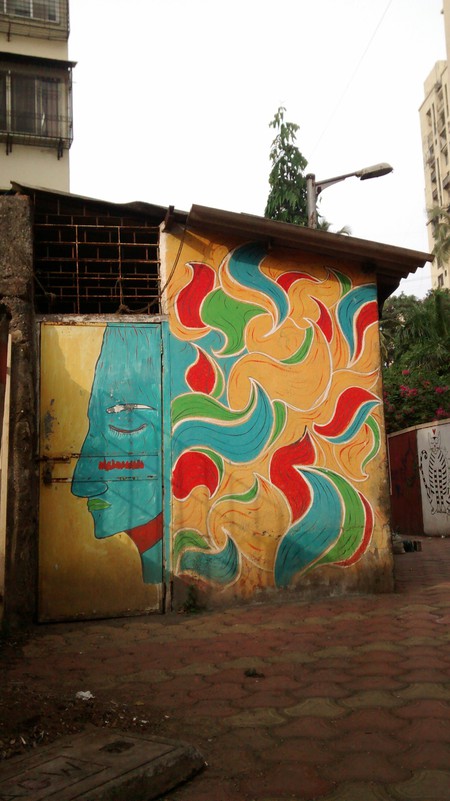 …And continuing with some commentary on societal issues, via this image: 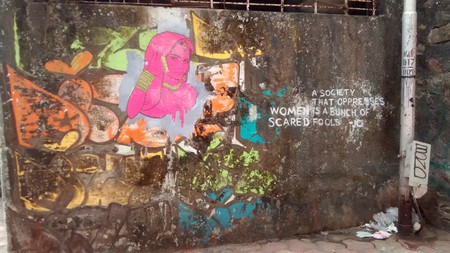 …and through text-based posters with opinions on other current events. 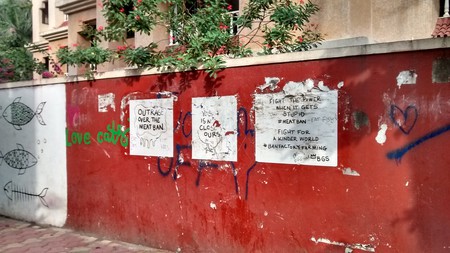 These following images were probably the work of some very young artists! 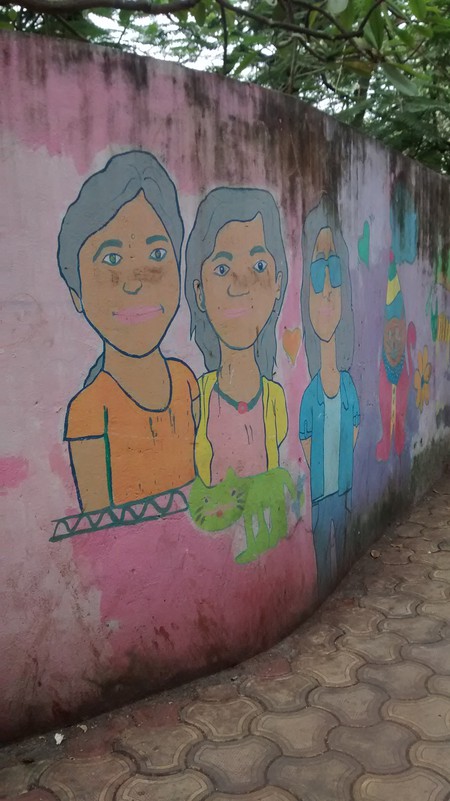 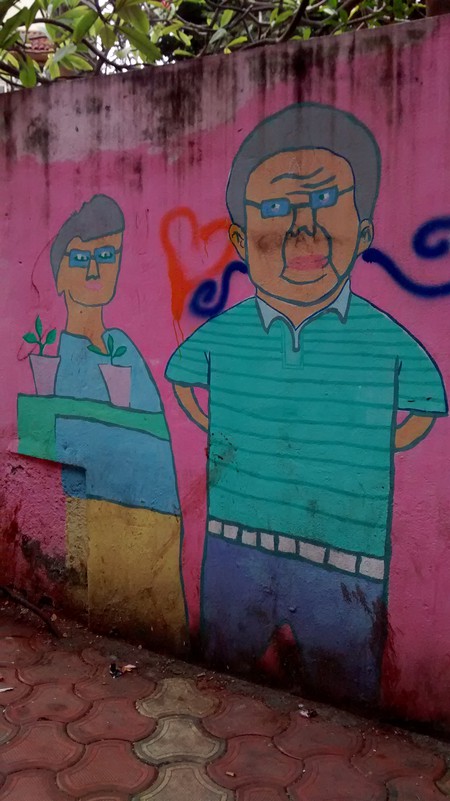 You can see in the next image what it feels like to walk through this lane; hopefully someone will manage to restore the artwork that has faded away quite a bit. 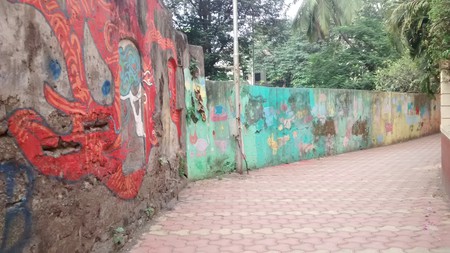 Once we hit Hill Road, we turned left to capture this graffiti, where the eyes reminded us of the billboard eyes in The Great Gatsby. 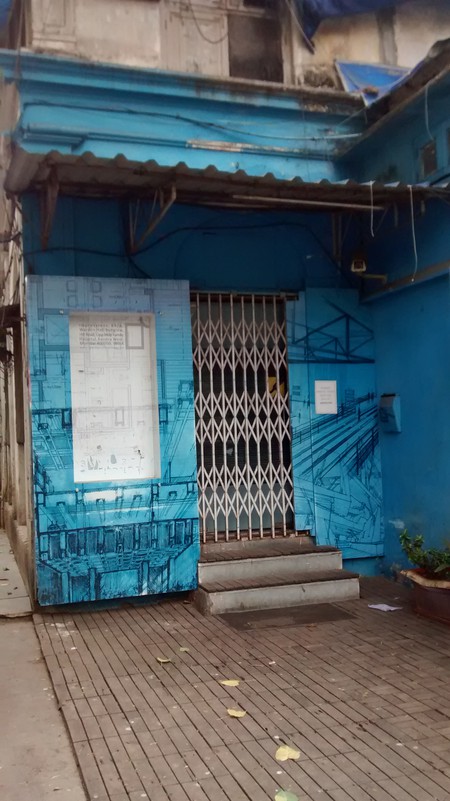 On our journey back to the starting point (Mount Mary Hill), we stopped at the Iranian café Good Luck for chai, bun maska, and samosa. After multiple cups of chai and great conversation, we walked up these steps which boast of one of the older artworks in Bandra; quite apparent from the faded colors. 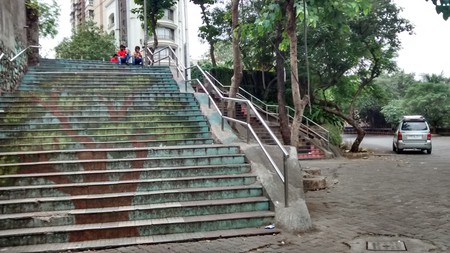 We then picked up the car from Mount Mary Hill and drove to Reclamation road to pay homage to the Father of Indian cinema, Dadasaheb Phalke. This huge graffiti reminds us constantly of his contributions to the birth of cinema in India and makes us wonder if we have evolved in the right direction. 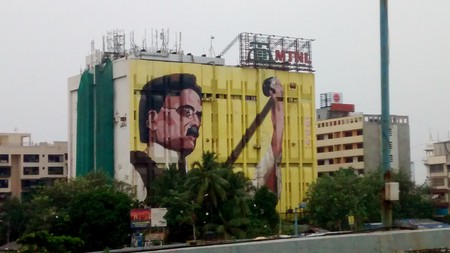 Driving back towards Lilavati Hospital, we unexpectedly caught sight of this graffiti of colourful animals, and went into the tiny lane to attempt to take a picture. 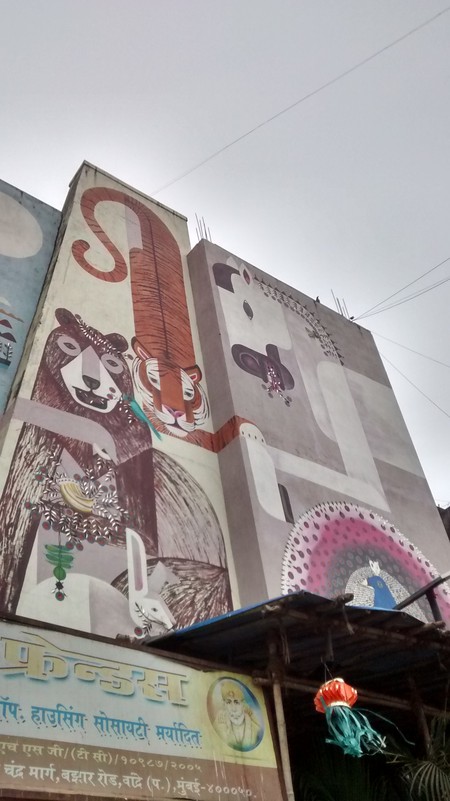 This, I imagine, is only a drop in the ocean that is the graffiti movement in Bandra! Hopefully, people continue to maintain and create colorful and meaningful images, using our walls as a means to express opinions and artistic capabilities, converting Bandra into the most accessible art gallery in the world.