Getting Around Delhi: Everything You Need to Know 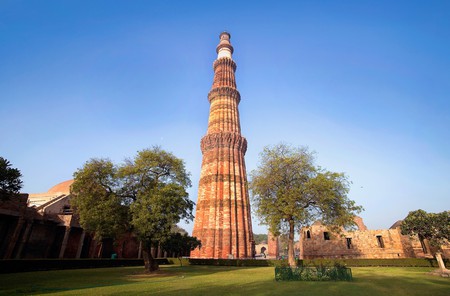 With its rich history and culture, Delhi is a dream destination. But truth be told, it isn’t the most tourist-friendly city in the world. First, there’s the extreme weather: summer temperatures can soar to over 45 degrees Celsius. The capital has also become infamous for its pollution levels. Then there’s the issue of safety. Therefore, it’s important to know how to get around the city. Our definitive guide has all the answers.

The Delhi Metro, which started operating in 2002, has been a boon to the capital. Travelling from one part of the city to another has become much easier, as well as quicker and cheaper. For instance if you drive from New Delhi Railway Station to Indira Gandhi International Airport, it will easily take you over 45 minutes. If you take the Airport Express Line, it takes just seven minutes (according to Delhi Metro’s Journey Planner).

There are currently six metro lines; the Blue Line has the most stations (51), including Rajiv Chowk, from where you can access Connaught Place. The Delhi Metro is one of the safest modes of transport in the city, and the first coach of every train is also reserved for women.

For those concerned about the environment, the Delhi Metro has been recognised by the United Nations for reducing greenhouse gas emissions. The only drawback is that the trains can get extremely crowded during rush hour. 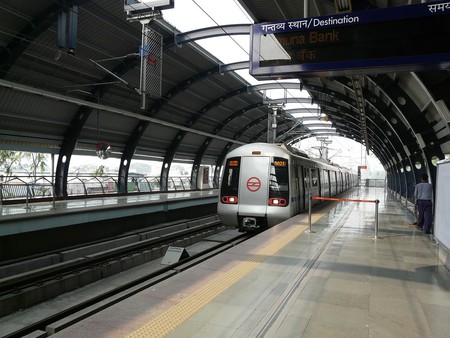 In terms of convenience, car-sharing services like Uber and Ola, rank right on top. They’re far cheaper than regular taxis, and maybe even safer. Drivers are mostly punctual, and good with navigation. If you want to save more, make use of Uber’s Pool or Ola’s Share services, where you carpool with other passengers. For distances up to eight kilometres, the carpool fare can be as little as Rs. 59 (£0.70). These taxi services also have regular promotions for discounts on rides. It’s a good idea to check your driver’s ratings before getting in.

These yellow and green three-wheelers are the best way to get around the city for short distances. They’re quick, cheap and can navigate around busy traffic easier than cars. The minimum starting fare for the autos is Rs. 25 (£0.30) for the first two kilometres, and after that it’s Rs. 8 (£0.10) per kilometre. Night fares are an additional 25% of the fare, and if you have a big luggage you might be charged a little extra. However, most drivers refuse to travel by the metre. If they know you’re a tourist, there’s every chance they’ll quote a much higher price. If that happens, check the distance to your destination and calculate the approximate fare and then negotiate with the driver. You can also calculate the fare on this website. If you have any complaints while travelling via an auto rickshaw you can make a complaint to the Delhi Traffic Police via SMS on 56767, or contact the Delhi Traffic Police’s 24×7 Helpline on 1095. 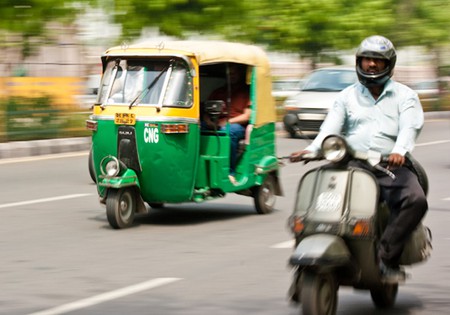 Travelling on a cycle rickshaw is probably more about experience than convenience. These are modified tricycles designed to carry passengers. They’re not found in every part of the city (especially not in South Delhi), but there are plenty in Old Delhi, where they’re actually more efficient on the narrow and crowded roads. There are even sightseeing tours you can take, like the Old Delhi Rickshaw Ride. While cycle rickshaws can be fun in winter, they are less so in the scorching heat of summer. 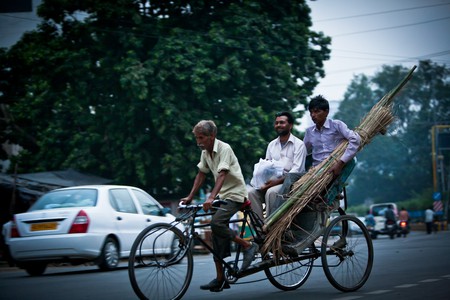 There are a number of radio taxis available in Delhi, such as Meru Cab, Mega Cab and Easy Cab. You will need a local mobile number to book any of these online. At the airport, find radio taxi booths as soon as you exit, from where you can book your ride. They’re reliable and efficient for travelling around the city. The current fare is Rs. 23 (£0.26) per kilometre flagfall, then Rs. 69 for the first three kilometres, and Rs. 23 per kilometre thereafter.

Delhi roads are much wider than those in India’s other cities, but lanes are non-existent and you’ll often find that drivers don’t care much for traffic rules. But, if you like driving and think you can handle the Delhi roads, then renting a car could be an option. You can also rent a car if you’re planning a road trip from Delhi to destinations like Agra, Shimla or Jaipur. 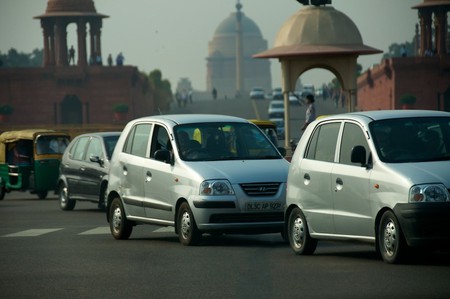