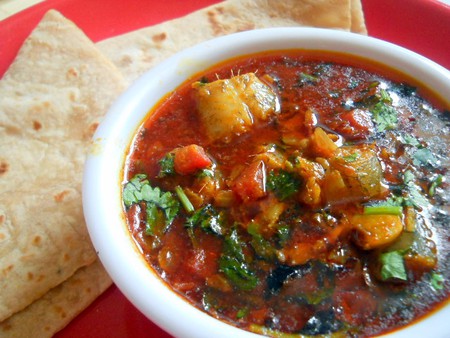 Bombay Duck is a popular delicacy along the coast of Maharashtra, even more so in the city it is named after. Is it a duck? Is it a fish? Find out as we get down to the fishy business of its name, and its legacy on the plates and palates of Bombay.

To anyone who has grown up eating fish in Bombay, the fragrance of crisp-fried bombil, or Bombay duck, is a trip down memory lane – to Sunday afternoons spent devouring plate after plate of rice, fish curry and fried fish, and bowlfuls of cooling solkadhi to wash it down. The prelude to this rather delicious repast is a morning trip to the fish market. As the sassy fisherwoman, after a satisfactory haggle, proceeds to hand over your catch, your eyes casually look beyond the kolmbi (prawns), pomfrets, surmai and tisrya (clams) and over to the pile of bombils, both dry and fresh, and after a moment’s reconsideration, these are bought, to be fried on the side.

To those fortunate enough to have discovered the joys of eating fish only later in life, the business of bones can be quite tricky; sympathetic onlookers watch you as you try to get the bones out of your fish, until you give up the whole thing and settle for something ‘boneless’ (here, the onlookers scoff and look away). This is where Bombay duck comes in – coaxed by its enticing appearance, you peel off the crisp, batter-fried golden skin, only to discover the treasure that lies underneath. Soft, creamy flesh that melts in your mouth, and bones soft enough even for the toothless. Thus, begins the love story with Bombay duck – a spicy, crisp-semolina-coated affair, which makes you melt with every bite. 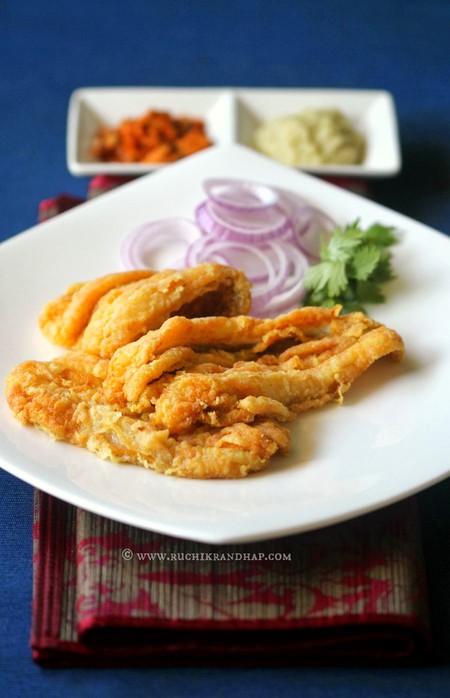 The bombil, or Bombay duck, is a type of lizardfish scientifically called Harpodon nehereus, found in the waters surrounding Mumbai and coastal Maharashtra.

So why call a fish a duck, you ask? Anecdotes say that the British, as much in love with this fish as locals, often struggled to get the name bombil right. In those days, bombil would be ferried across the country (to Bengal, a state just as much in love with fish) by trains carrying Bombay Daak, (daak meaning post). Soon, the name caught on, and phrases like ‘smelling like Bombay Daak’ soon turned daak into duck.

Over the years, the bombil has found for itself not just a place on the plates and in the frying pans of Mumbaikars, but also in their vocabulary. Anyone who was a thin child has been called a ‘Sukka Bombil’ at least once, a fitting comparison for the bony, shriveled up form that bombil takes when sun-dried. Walk into a koliwada, or a fishing-village anywhere in Mumbai, and you will be greeted first by an unmistakable waft of the ocean and salt – an acquired smell for many – and then rows and rows of Bombay duck hung to dry. 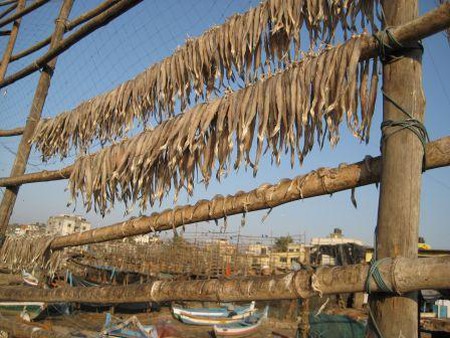 Fresh, fried Bombay duck with a squeeze of lime and green chutney is undeniably delicious, but you’ve barely scratched the surface there. In its salty, sun-dried glory, Bombay duck assumes an almost gourmet quality. In the rainy months when fresh fish is hard to come by, and fishermen steer clear of Bombay’s stormy seas, Bombay duck becomes a savior, and what a perfectly delicious one at that! Lightly roasted, crushed, and flavored with onion, chili, garlic and spices, dried Bombay duck transforms into Sukka Bombil Chutney, a fragrant, earthy, spicy mess, one that could easily crown a table with all things umami. Pair it with a simple dal-rice-salad combo, or sprinkle liberally over a roti, roll it up and munch away till you taste the ocean in your mouth – be warned though: dried Bombay duck, much like anchovies or caviar, is an acquired taste.

In an East Indian kitchen, Bombay duck marries the fiery red rechado masala, laden with tomatoes and onions, and becomes bombil masala – a spicy curry that can be soaked up with pao or hot rice; with a couple of tablespoons of vinegar – a true blue East Indian addition – this tangy dish is more agreeable to the palates of those still getting used to the smell.

For those who can’t cinch an invitation to a fish eater’s home, go to any seafood place in Mumbai – be it Pratap’s, Apoorva, Gomantak, Satkar, Gajalee or Mahesh Lunch Home – the Bombay duck won’t disappoint.

Whether served along one of their famous thaalis, or fried as a perfect accompaniment to a chilled beer on a Sunday afternoon, this buttery, creamy fish will have your palate hooked. Friends who detest the smell of fish have found themselves addicted to Bombay duck; fights for the last piece have often ruined Sunday afternoons. The Bombay duck is an affair to last, quite like the city it is named for – there’s something in there for everyone.