Following in the Footsteps of Alexandra David-Néel 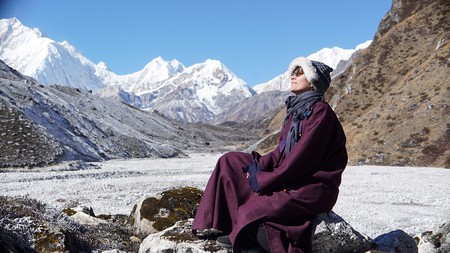 In 1911, Alexandra David-Néel set off on a 14-year journey. She became the first Western woman to visit Lhasa and to speak to the Dalai Lama. Her adventures inspired countless others to pick up their bags and see the world, including Elise Wortley, who last year decided to literally follow the footsteps of the legendary explorer. Talking to Culture Trip, Elise Wortley recounts her version of Alexandra David-Néel’s trek through the Himalayas.

“I would wake up in my home‐made tent with frost all over the inside of the tarpaulin and covering my blankets. There was so much ice, that the blankets actually cracked every time I moved,” recalled Elise Wortley. In 2017, the Londoner found herself 5,000 metres (16,404 ft) high up in the Chopta Valley, in Lachen, north Sikkim, recreating the famous pilgrimage of Alexandra David-Néel. 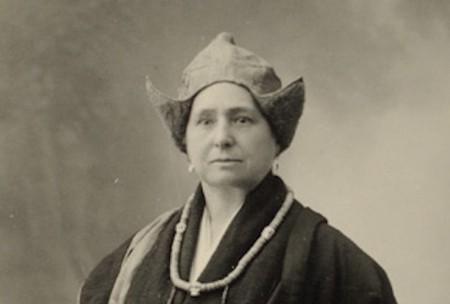 Like Jack Kerouac, Allen Ginsberg, and Alan Watts before her, Elise was inspired by Alexandra David-Néel. She was one of the first Westerners to popularise Buddhism. Her teachings mobilised the Beat Generation literary movement. But what sparked David-Néel’s great adventure was boredom. She grew up in the early 1900s, when women were expected to wear elbow-length gloves and carry lace parasols. In My Journey to Lhasa, the Buddhist scholar said, “I craved for a life beyond the garden gate, to follow the road that passed it by, and to set out for the unknown.”

When Alexandra David-Néel decided to journey to Lhasa, the country was off-limits to foreigners, and she’d already been expelled from Tibet once before. Undeterred, she dyed her hair each morning with Chinese ink and scrubbed her skin with soot from her cooking pot, to disguise herself as a beggar. By the time she reached the holy city, she looked every inch the part. She’d travelled 8,000 kilometres across China by yak, mule, horse and foot. She was so malnourished that she was boiling her leather boots and sucking off the water to survive.

It is this attraction towards an ‘abnormal’ life – the unknown – that pushed Elise to set off on her own path beyond the garden gate. “I’ve always been mesmerised by her,” she said. “I’m still in awe of how she managed to live like this for so long, especially through the freezing winters. At times Alexandra didn’t even bother to put her tent up, she just slept in the snow.” 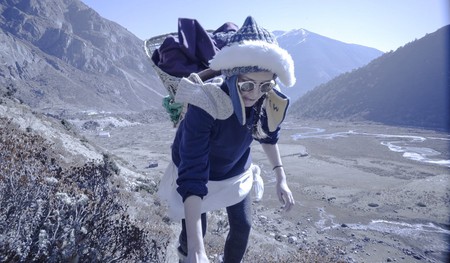 Despite her fear of the unknown, Elise was determined to recreate David-Néel’s journey. “Ever since I first read her book My Journey to Lhasa when I was 16… I could never get her story out of my head,” she confessed. “When we are teenagers, we have so many ideas and they all seem possible at the time. Then life gets in the way and before you know it you haven’t done those hair brained ideas you thought you always would.”

When Alexandra David-Néel set off on her journey, she left with little more than a vague plan to learn more about Buddhism. Her adventure around the Himalayas eventually led her to a Sikkim cave, where she would meditate for the next three years. When Elise set off on her journey, finding this cave was her plan. “This cave seemed like an integral part of her story so of course I just had to find it,” she said. The cave is unknown to most, even locals who live in the area. 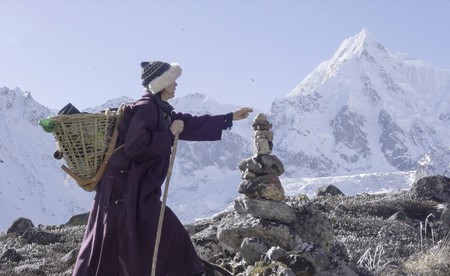 Elise also planned to replicate every detail in Alexandra David-Néel’s attire. Wherever possible, she insisted on only using equipment that existed in the early 1900s. But finding an authentic wooden backpack proved impossible, forcing Elise to seek creative solutions. “After looking more closely at images of [wooden backpacks], I realised that they were basically backwards chairs with their legs cut off and turned the other way,” she said. After this discovery, she found an old chair, chopped off the legs and seat, turned it upside down and slotted in a basket.

In the end, Elise managed to replicate David-Néel’s dress down to the underpants. But she quickly learnt that there were downsides to travelling like the 20th-century Buddhist explorer. “Each morning when the sun came up, all the ice melted and I would be drenched’, she said. ‘This really isn’t good when you’re 5,000 metres up a mountain.”

While searching for the cave, Elise recounts, “I asked so many people, and nobody seemed to know its exact location.” After asking countless locals, she eventually found a guide in a remote village beyond Lachen who knew where it was. The trek up to the cave was tough, invariably made more difficult by a wooden backpack and no modern hiking equipment. But it was worth it in the end. “I sat down inside the cave, looking out over the same views that she would have had over 100 years ago,” Elise related. “Looking back now it seems totally incredible that I was actually there sitting in that cave that was such an important place for her.” 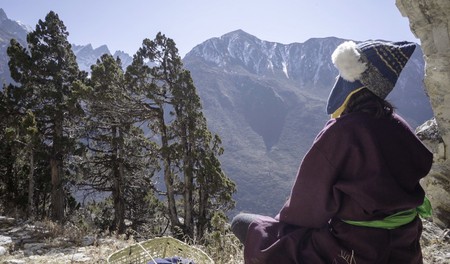 When Elise’s journey came to an end, she found it hard to adjust back to everyday life. “As soon as I turned my phone on back in Delhi I could immediately feel the stress building again,” Elise said. “I really miss that feeling of being alone and fully appreciating everything around you and right in front of you.” Though Alexandra David-Néel had more than one near-death experience, one difficulty she’d never experienced was the anxiety that accompanies modern technology.

The feeling that overwhelmed Elise was a sense of achievement. She’d finally lived out something that had once been a dream. Alexandra David-Néel once famously said, “I vow to prove what the will of a woman can do.” And though she died almost 50 years ago, her spirit still lives on in the adventures inspired by her fearlessness. Crediting the Buddhist explorer’s work, Elise said, “Without a role model like her to think, ‘well, if she can do it, I can do it’ I would never have managed to push myself in ways I have.”

Elise Wortley is raising money and awareness for Freedom Kit Bags, a charity that empowers women in rural Nepal by providing them with reusable kits for their periods. To learn more and donate, please visit this page.