Beyond The Boundaries, 10 Contemporary Indian Artists 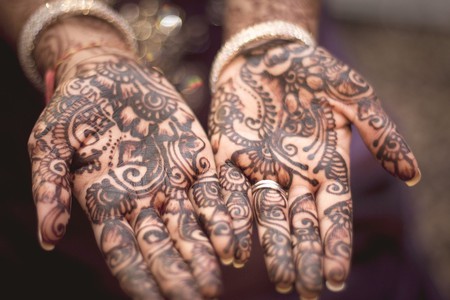 Today’s Indian artists are taking risks of combining genres and defying disciplinary boundaries. Sometimes displaying a sharp political sensibility, rather than rely on the traditional, the works often explore newer possibilities within the environment around them, aiming to create points of context-sensitive references to politics, personal concerns and historical debates. Bursting with an abundance of talent, this guide explores the work of ten standout Indian artists working today. 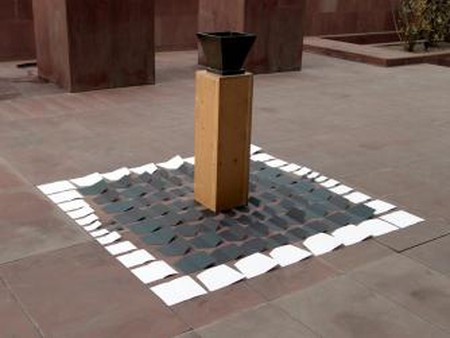 Astha Butail, Performance Series, Unfolding, A Story Within A Story | © The Artist

Astha Butail’s childhood was influenced by the huge wave of Westernization during the 90s that engulfed urban India. These Western ideals came in the way of her family traditions, only following these traditions out of respect for her elders. After travelling to Europe and other parts of the world later on, she witnessed the locals’ pride of their own culture and began revisiting her own. She travelled through Himachal Pradesh to discover the land where she was born and unravelled the many myths and stories of her own culture. In finding meaning, Butail choose to express herself through art and design. In her ongoing open book project A Story within A Story, she invites the viewer to participate through an online blog. The nine month project is a collective of stories from participants and Butail, which follow the same theme of Black Sun (explained on the blog), inspired by the Rig Veda. 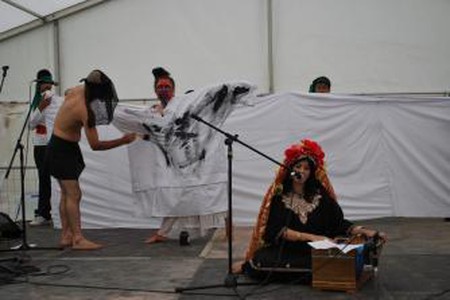 Inder Salim is a radical performance artist who aims to provoke his audiences on the issues of contemporary politics in India. His practice explores his own unique way to reflect upon the relationships between art and its relevance to the world he lived in. During one of his most striking performances, he chopped off the little finger of his left hand and threw it into the Yamuna River. This experience and extreme experiment with the body allowed Salim to explore his own world experimenting with the material objects in his surroundings and even his own body. 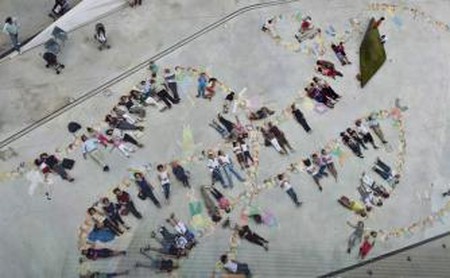 NS Harsha was born in Mysore, India, in 1969. From living in a country with one of the largest populations in the world, Narsha’s practice is drawn to the human form. In his earlier works, Narsha was interested in rhymes and chants from the past, as well as children’s tales and comic books. He then began to experiment with mark making and the idea of ‘chanting’ with forms, assembling distinct individuals and characters in the same picture to observe their interrelationships as a way of portraying the reality of everyday life. His preferred medium is water-based paint, but depending on the situation and work, he is also known to use other objects including found objects, wood, mud, powders, photography and rice. This experimentation reflects his own treatment towards space and place. 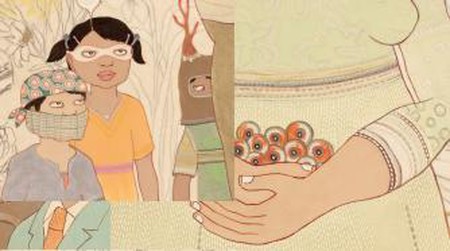 Dhruvi Acharya (born 1971, Mumbai) began painting her memories of a real and imagined homeland soon after reaching the USA in 1995. Her paintings focus on the psychological and emotional aspects of an urban woman’s life surrounded by discord, violence and pollution. The subject matter is not overly political or full of anger, but instead is subtle, dark and contains elements of wry humour. Her aim is to draw viewers into a world where thoughts are as visible as ‘reality’, and where the characters live and metamorphose by the logic of that world. Her own concerns for the environment, her love for Indian miniatures, comic books and contemporary street art all come together in the work. 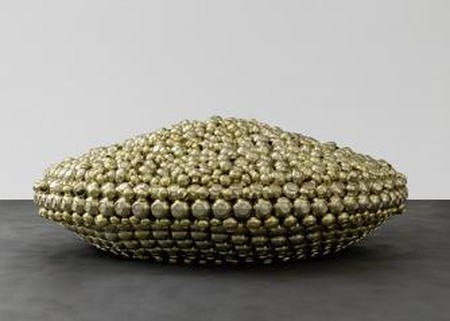 Subodh Gupta’s works have been characterized by the use of stainless steel, creating replicas of Indian Kitchenware, formally arranging the utensils into extraordinary, large-scale installations. These objects are culturally specific, allowing Western and Indian audiences to view them differently. The objects however have universal resonances; being food related brings into play the tension between accumulation and deprivation, an issue which is certainly relevant to contemporary India and also the whole world. His work UFO (2007) consists of hundreds of brass bowls in the shape of a 1950s style flying saucer. The final outcome creates a sense of telekinesis, as if the vessels are magnetically clinging together. The sculpture is imbued with a sincerity of purpose that believes anything is possible. 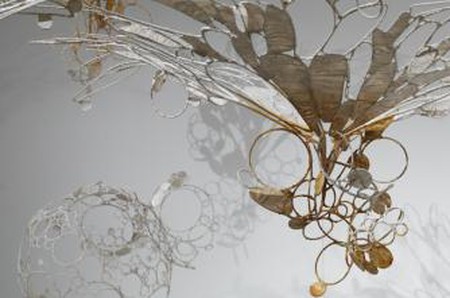 Ranjani Shettar is known for her unique approach to sculpture including material experimentation, relationship to space, engagement with nature, exploration of tradition and resonance with modernism. Often transforming natural phenomena into magical forms, Shettar creates sculptures influenced from traditional Indian crafts. Her work Interplay consists of a structure that is made up of two netted components composed of coloured beeswax and lacquered wooden spheres connected by brightly dyed cotton thread. Like Shettar’s other bead and thread installations, Interplay suggests a drawing in three dimensions. This piece was featured in her installation Drew Drops and Sunshine, an ongoing investigation of the relationship of water and light to living things.

Alia Syed is an experimental filmmaker interested in language, fairy tales, myth and folklore. Her works explore the aesthetics of distortion, disfiguration and loss, focusing on the materiality of filmmaking. The process is an important part of the work, which involves reprocessing representational images. Through technological manipulation, Syed deliberately deconstructs our conventional perception and recognition. Finding things by chance and fusing them together are important and unique approaches, creating special effects and abstract imagery. She also uses macro re-photography and re-films the footage of 16mm video to increase visual grain in order to illustrate the complex narratives and historical references often found in the subject matter. 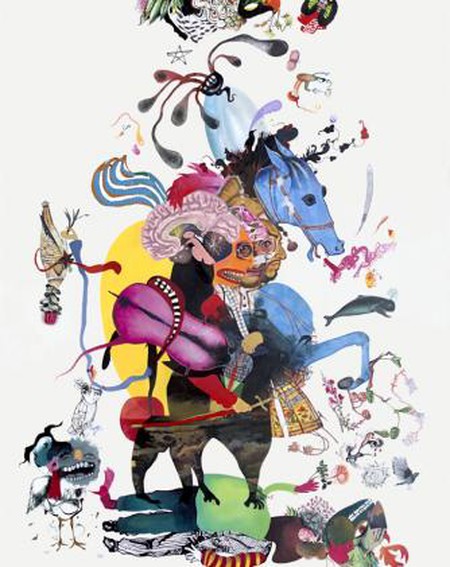 Raghava KK, A Gallery of Adorable Boundaries, 2011 | © The Artist

Raghava KK is interested in the complexity of identity. In his series Epic Recital, he explores the truth that history seems an inadequate form of record keeping, focusing on the concept that facts and biases are never separated. His work is centered on his own approach to ‘historical’ knowledge, of which he feels better represents the fragmented self, appropriating the teaching of history, historic events, nostalgia and psychological archetypes. He creates his own series of mythological characters and scenes, borrowing from tradition and history. Having quit formal education at the age of 18 to start his career as a newspaper cartoonist, Raghava KK is today considered one of India’s most successful young artists. 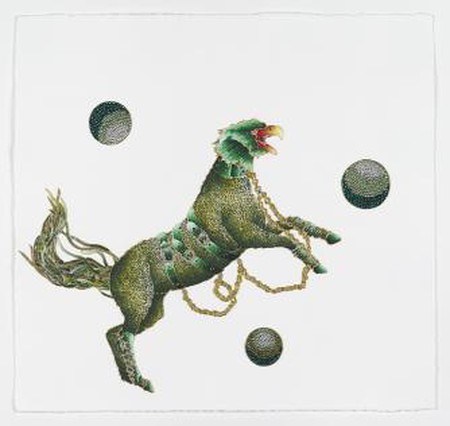 Raqib Shaw was born in Calcutta in 1974. A graduate of London’s Central Saint Martins College, he has developed a fascinating and quirky practice that combines the monstrous and the erotic. His paintings lie somewhere between the categories of fine art and applied arts. Shaw’s landscapes, bustling with illusions, contain references borrowed from a powerful imaginary world, one that brings together mythological man-animal characters. The characters evolve within precious and fantastical settings. Shaw chooses radiant tones, enlivening his images with colored enamel and metallic paint. His dreamlike landscapes are inspired by decorative and floral motifs, and crafts such as silversmithing, tapestry work and jewellery making. 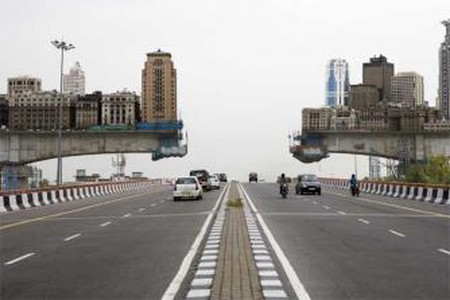 Gigi Scaria’s art practice is drawn towards his fascination of maps and ‘mappings.’ From observing a map from a distance, we experience the effect of colorful abstract territories. However, upon close observation we come to know that each and every abstract form and line represents a real place that exists or has once existed. Looking at them through this veil, maps can teach us many things in terms of form, structure and content more than they describe a territory or geography. His recent works explore the critical analysis of globalization and its world markets: national and political territories that have merged into a new world created by economic territories which no longer looks like the world we were once familiar with.