Bastions Above Beaches: Forts Of Goa 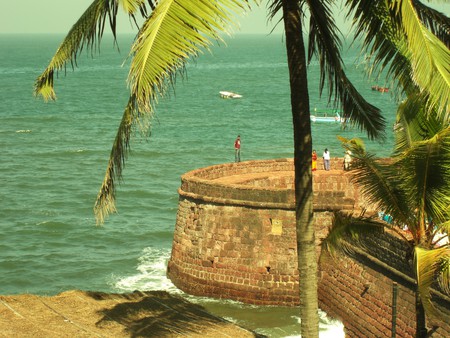 Goa has long been a coveted piece of land. With low lying hills, numerous rivers and riverine islands, coupled with torrential rainfall and scorching summers, Goa was a difficult terrain to rule over. But it was sought after for its plentiful and deep natural harbors, important for trade in medieval times. Its mythological status invited conquerors from far and wide. Here are the great forts of Goa that have protected the land above the beaches.

Over centuries, many civilizations ruled and flourished here, each leaving an indelible mark on the psyche and landscape of Goa. The kings of yore, the Mauryas, Chalukyas, Rashtrakutas ruled till the 10th century. Then came the famed Kadambas of Chandrapur (Chandor), ushering in a truly golden age for Govapuri, as they referred to their homeland. After three centuries, a period of skirmish followed between the Bahamani Sultanate and the Yadavas, the Vijayanagara Empire, and finally the Bijapur Sultanate. This would change with the arrival of the Portuguese in 1510 AD. The Portuguese arrived in Goa as a part of their expansion conquest in the East. Afonso Albuquerque led the Portuguese fleet against the Bijapur Sultanate who gave up with a little fight and were massacred. Knowing they had few friends, the Portuguese strengthened existing forts and built new ones. With their advanced artillery and knowledge of defenses, Portuguese forts were different from their Indian counterparts.

Goa’s lifelines are its rivers: Terekhol, Chapora, Mandovi, Zuari and Sal. Each of these rivers has a huge mouth, and the Portuguese kept their defenses ready at each of these locations. 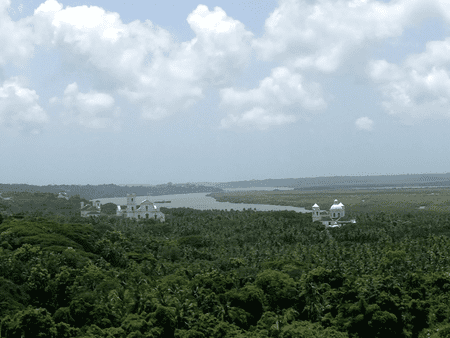 The first capital of the Portuguese territory was a fortified town, keeping in line with European tradition of walled settlements. Located on the southern banks of Mandovi, it was flourishing with convents and its many bells rang in massive cathedrals of laterite walls plastered pristine white. Old Goa, or Goa Velha as the Portuguese called it, was the administrative seat of the Portuguese India territories. In the 17th century, the city was hit by epidemics of malaria and cholera and abandoned for a newer location ‘Pangim’ further west, near the mouth of the Mandovi- today’s Panaji. 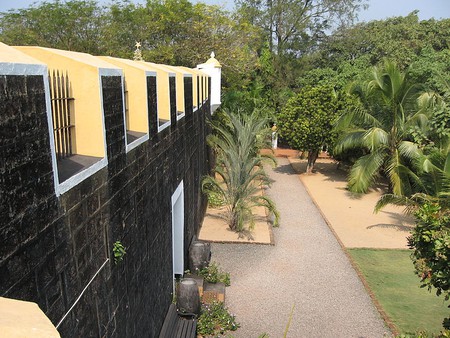 The Terekhol river forms the northern boundary of the Goan state. At the mouth of the river is the Tiracol fort. The fort was captured by the Portuguese from the Sawants of Sawantwadi. It now houses a church and a heritage hotel. 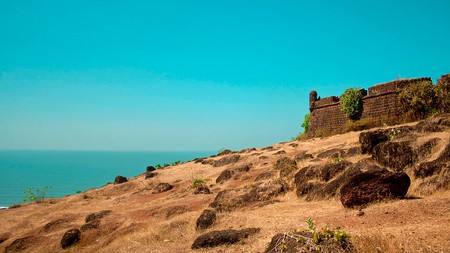 Heading south down the Chapora river meets the sea between Morjim and Vagator beach. Overlooking this sizable bay is the Chapora fort on a hillock to the south. A steep climb leads one to a typical European fort with angled bastions. The characteristic cylindrical turrets of this fort have been immortalized in pop-culture in the film Dil Chahta Hai (2001). 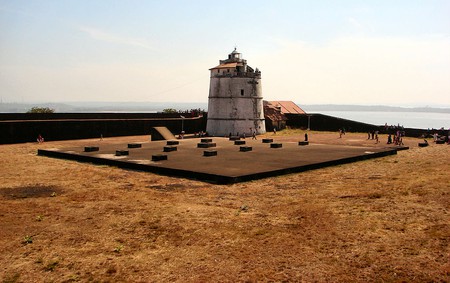 To the south of Chapora are the famed beaches of Vagator, Anjuna, Baga, Calangute, Candolim and Sinquerim. Beyond Sinquerim is a highland occupied by the Aguada fort, the largest and the most famous of Goa’s forts. It overlooks the Mandovi, meeting the sea at its south. The fort derives its name from a fresh water spring, ‘aguad’ meaning water. The remnants of the fort now house a state prison. The lighthouse at the top is accessible to the general public. The fort is in a good condition, with deep moats surrounding its unbroken walls. 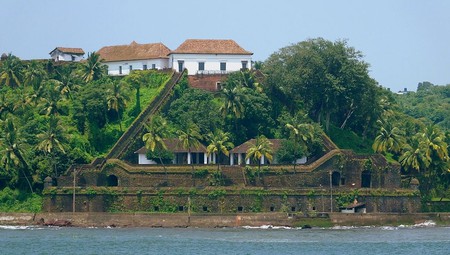 Another fort on the northern banks of the Mandovi is the Reis Magos fort. The name references the Three Wise Kings from the Bible. Beautifully restored, the fort overlooks the twinkling lights of the Panjim city across the river. It also houses a permanent exhibition showcasing caricatures, cartoons and other artwork made by Goa’s own Mario Miranda.

Crossing the Panjim-Miramar peninsula, we come across the widest bay of the Mormugao Harbour where the Zuari meets the sea. The Vasco-Sada fort on this headland is also used a state prison nowadays. The south is occupied idyllic beaches from Majorda to Colva to Mobor. At Mobor-Betul, the Sal river meets the sea amidst several sandbars and creeks. The smaller Betul fort is neglected owing to the famous Cabo de Rama fort. 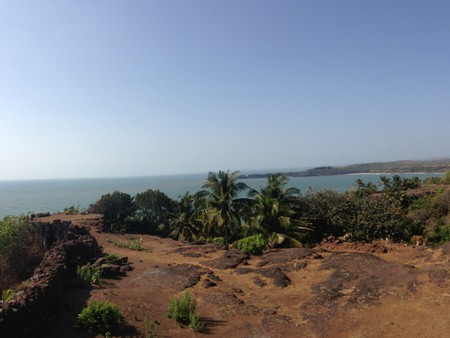 Cabo de Rama, though hardly mentioned as a site of battle, was fortified by the Portuguese after capturing it from Raja of Sonda in 1763, before abandoning it just 70 years later. It’s the southernmost fort of the Goa. The front wall hides a vast headland jutting westward into the sea, surrounded by steep cliffs that fall into the sea. The remains are scattered all over the expanse of the plateau. It offers magnificent views of the beaches of South Goa, including the less frequented Palolem and Agonda. 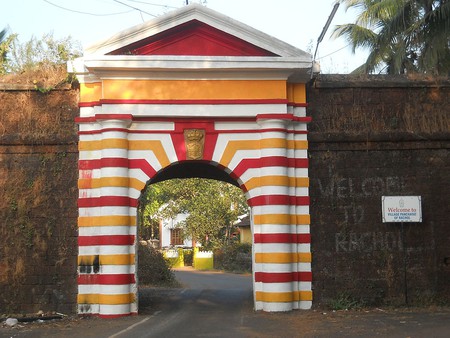 Built in 1580 to the east of Margao, an arched gateway is all that remains of the Rachol seminary. It was one of Portuguese Goa’s most defensive points. Further inland is the ancient capital of Goa, Chandrapur, now called as Chandor. Though famous for its palatial Menezes-Braganza house, Chandor was the seat of the Kadambas and today a lone nandi (bull) is all that remains as a marker of a glorious past.

Besides these major sites, Goa’s forests have devoured many smaller forts. Forts like Alorna (Halarn) and Tivim are hardly recognizable in the thick overgrowth. The fort of Santo Estevam, thirty kms east of Panjim is an unspoiled gem. Close by is the Corjeum fortress on the island of Aldona.

This unassuming collection of forts is a must visit for the discriminating traveler, willing to wander off the beaten path. And those willing to brave the heat and humidity.