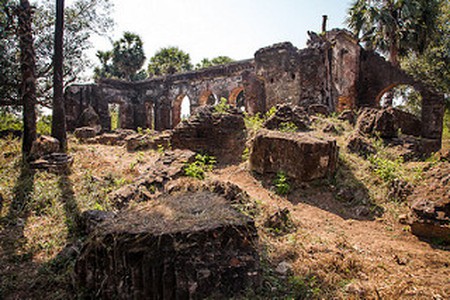 India’s incredible heritage and history can be a source of wonder, and each historical site has its own charm. If you look closely, there are still many sites rich with history that are untouched by the tourist circuit. Arikamedu, located on the south-eastern shores of India about seven kilometers south of Pondicherry, is a perfect example. 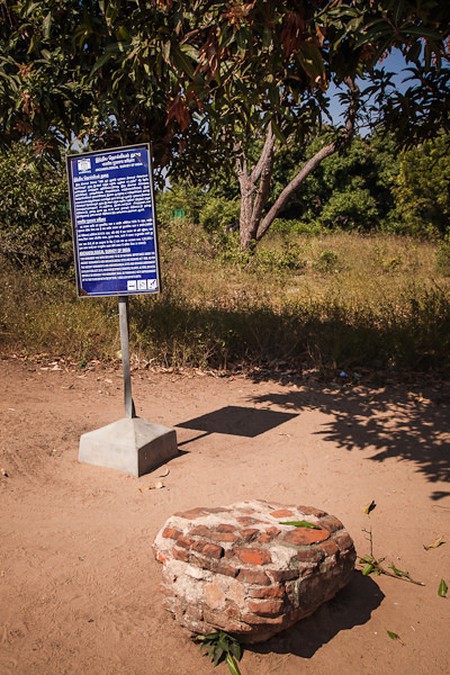 ASI board at Entrance

Arikamedu is located about half an hour from Pondicherry. After turning eastwards from the highway, visitors have to cross a labyrinth of village lanes to reach the site, which is tucked away on the banks of the Ariyankuppam River (now a brackish lagoon), behind an open field which often doubles up as a cricket pitch for local boys. The ASI protected property is fenced and has a raised mound at the centre. ‘Arukumedu’, meaning a ‘mound on a river bank’ in Tamil, was probably the inspiration for the site’s name. 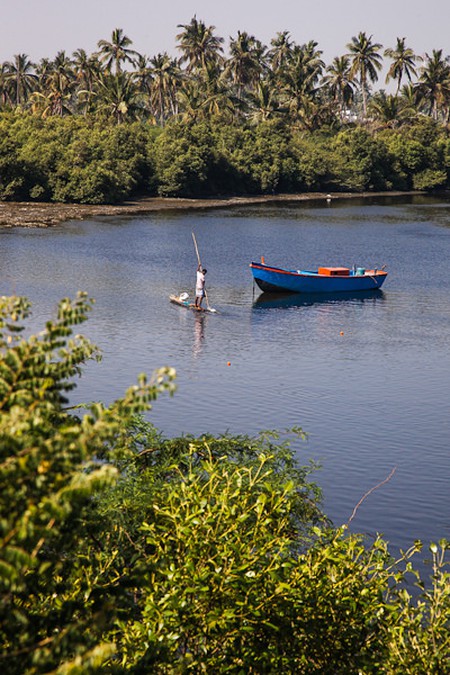 There is a path around the mound for visitors to walk on. Walking around the isolated and sleepy outskirts of a Veerapattinam village, it is hard to believe it was once a bustling international settlement, a centre for trade that also housed bead-making factories. At the moment, mango and coconut tree groves stretch along the river banks, making it an ideal space for leisure holidays. People have discovered ancient beads and pottery shards around this path — every now and then Roman-style bricks jut out of the surface. The path then rounds off towards the ruins of an 18th-century seminary. 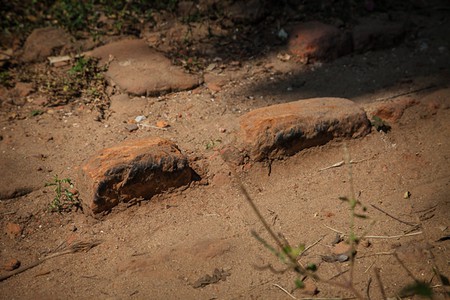 Over the years, archaeological evidence has indicated that this was the location of an ancient Roman emporium or an ancient trading outpost. The luxury-loving Roman Empire spread its trade network far and wide to procure exotic and opulent commodities for its citizens. Centuries ago, it was at this very spot that Roman ships thronged, laden with amphora jars of wine and olive oil. Cotton, sandalwood, peacock feathers, gemstones and, of course, spices formed part of the fantastic treasure trove which the Roman merchants took back with them. Such perilous voyages, though profitable, took more than a year to complete.

With a little bit of imagination, it is easy to imagine this place alive with bustling Romans negotiating with locals, servants loading and unloading goods, warehouses stocked with items for trade, and blacksmiths and carpenters working on spare parts for the ships. These ships would then reach the Roman shores where their bounty would probably be used by the rulers and wealthy aristocrats. It was during the times of emperors like Augustus (27 BC–14 AD), Claudius (41–54 AD) and Nero (AD 54–68) that this trading post reached its zenith. Archival records in Rome mention aristocratic ladies saving their powders and creams from India, waiting to use them when meeting their lovers. The goods were so popular that the authorities often expressed concern over the huge outflow of Roman bullion into India. According to one anecdote, the Roman Emperor Tiberius actually chided senators for wasting their wealth on the purchase of Indian merchandise. There was enjoyment, however, on both sides. In the ancient Tamil text Purananuru, the poet encourages a Pandyan king to taste the sweet-scented teral (wine) brought in by Roman ships.

The site was first discovered in the mid-1700s by the French astronomer Le Gentile. Over the centuries it has been excavated a number of times, notably by Dr. Eric Mortimer Wheeler (of Indus Valley fame) in 1944. Many of the artifacts from the site, including beads and pottery, are on display at the Pondicherry Museum.

Arikamedu in the 18th century

In the 18th century, this coast became the hub of another European group: the Christian missionaries. The French at this time were busy furthering Pondicherry as a trading post. At the same time, as God-fearing Christians, they invited a number of missionaries to convert the local population. In 1771, the Paris Society of the Foreign Missions chose this area to build a seminary where local priests from all over Asia would be educated. This area would have been a perfect backdrop for young priests endeavoring to engage in spiritual and meditative tasks. 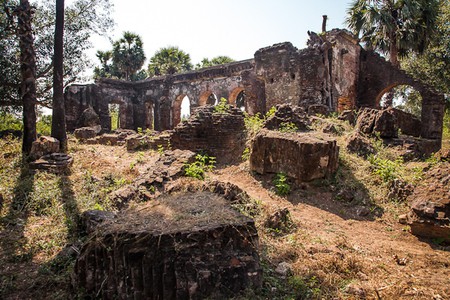 Today a few gateway pillars and walls of the original structure remain, and it is called the Mission House by the locals. On close observation, it becomes clear that some old, large bricks of the Roman era have been used in the construction of the seminary. 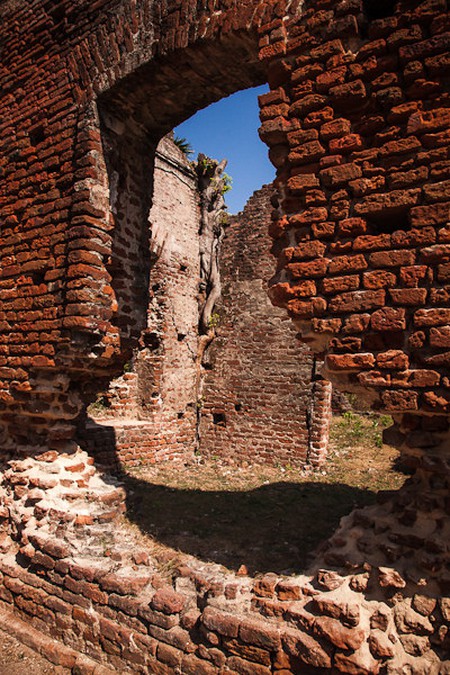 There is sense of the ephemeral as you stare at the arches of the ruined seminary and the brick bases of the Roman construction. What would have been a part of active life now lies abandoned in solitude. We go on with the dramas of our everyday life, responding intensely to our passions and dreams alike – but the earth is always solid under our feet, knowing that our human lives are just brief micro-moments in history.

It is also a good moment to ponder on India’s fate in the intervening years between the arrival of the Romans and the missionaries. When Romans came to India they knew they were coming to a land where they would find people of wealth, culture, learning, refinement and knowledge. However, when the French missionaries landed on these shores to set up their seminary, they perceived India to be a land that needed an evangelical uplifting and wealth. They set up schools for education and charities for the poor.

Beyond the obvious historical sequence of events, there is a hidden psychological story of our civilization. It was apparent that the national attitude had shifted, from the pomposity of the privileged to an almost servile attitude, soon to be shackled by colonial chains. It is only 60 odd years ago that we began to emerge out of the ‘colonized’ subservient attitude.

Spend a day around Arikamedu

Arikamedu makes for a fascinating half-day excursion if you are already visiting Pondicherry. It is easily accessible from Pondicherry town by road. If you have time on your hands then take a walk to the seashore: the picturesque rural ambiance is quite refreshing. You can also visit the Senkazhaneer Amman Temple at Veerapattinam to get a taste of the local architecture and rituals. On the drive back to Pondicherry visitors can stop at Chunnambar, another riverbank. PTTDC offers boating, trekking and picnic facilities on Paradise Beach which is accessible by boat from Chunnambar.