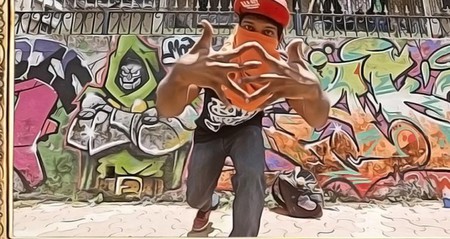 While you may have heard an array of genres represented on the Indian music scene, hip hop has been a rather quiet player, until now. We take you on a musical tour of the rising stars of India’s hip hop stage.

Video 1 : Ace aka 39 aka Abhishek: #HipHopHomeland

The ‘guardian of Mumbai rap’ and founding member of one of Mumbai’s first crews called Mumbai’s finest, Abhishek ‘Ace’ believes that hip-hop is the best thing that happened to him. His crew is heavily inspired by old-school rap; their music speaks to real problems of suburbia, and they’ll be dropping an album called Mumbai Till I Die very soon. In case that wasn’t enough, Ace is also dreaming of pursuing an MBA on the side along with his main focus on popularising the hip hop scene in the city. He believes the scene is steadily growing; unlike previously, there are now rappers in small pockets across the city, though he bemoans the practice of modeling Indian rap entirely to a Western aesthetic.

Arif broke onto the scene at the Red Bull BC 2009 National B-Boying championship, and even represented India at the South Korean leg of the competition. A true B-Boy, he calls himself Flying machine because of his love for the signature B-Boy flip move. He runs a crew called Beast Mode (Born Ethical Abilities on Streets) with fellow B-Boys Ninja, Sonic and Mik 62. His music is inspired by the likes of Kendrick Lamar and Joey Badass and to date he’s won more than 13 awards for his B-Boying!

Zake is a graffiti pioneer who believes that graffiti is much more than art, ‘it’s war’. Working the bylanes and streets of Mumbai after-dark, the task at hand is two-fold, to figure out what to paint spontaneously and to avoid getting into legal trouble with cops and building owners. While the graffiti scene is still relatively fresh in India, Zake is a principled graffiti artist, and does not paint on monuments or temples, preferring to paint on government properties instead. He’s also part of the crew at both Beast Mode and DIS, a holistic hip-hopper indeed!

Boldly embracing the local term for thug and using it as his artist name is only the beginning for this ‘mawali’ (real name Aklesh Sutar). Being bullied in school led him to a rather creative form of stress relief and combat – wordplay. His inspirations are perhaps even more surprising than anything else: he reads sacred texts like the writings of Swami Vivekananda, and can engage you in a conversation on a range of diverse topics from metaphysics to theology. Later this year he heads to the UK with the Bandish Projekt, his first international performance which he hopes will help him make it on the scene.

Sahir was born into a family that’s in the movie business, he calls himself Kinga Rhymes aka Cynical Phantom, and like his famous lyricist father, he enjoys playing with words more than anything else. He proudly incorporates street slang from Millat Nagar into his music. Unlike most rappers, Sahir is a strong opponent of drug use and hedonism and uses his music to bring awareness to these issues.

A Gujarati rapper, and the only one on the scene at the moment, Dharmesh is a Naigaon boy, raised in a bustling chawl that offers plenty of raw material for his music. He writes on sensitive and gritty subjects, ranging from police violence to political corruption. At only 18, he’s already firm in his convictions about rapping in Gujarati over English to stay true to his voice and his listening audience. He likes to listen to different kinds of music from trance to bhajans by Krishna Das. He’s currently recording a taal with Mawali and hopes to see more acceptance for the hip hop music scene in the country. If there’s one artist on this list that will make you sit up and take notice, Dharmesh is the one.