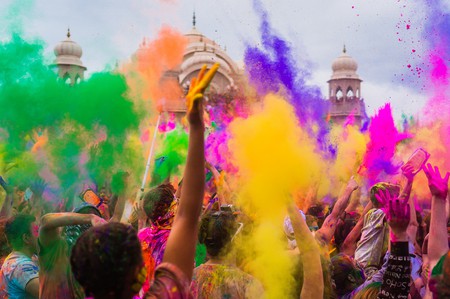 A plethora of colors, the beat of drums, crisp white clothes, and music in the air is what perfectly describes this fun festival of spring. Holi is a Hindu celebration that signifies the triumph of good over evil. It is a celebration that brings family and friends together—dry colors, water guns, color solutions, and water balloons are generally used to target loved ones. We have put together a guide to Holi celebrations in Mathura and Vrindavan this year, which will start on March 5 and go on until March 14. 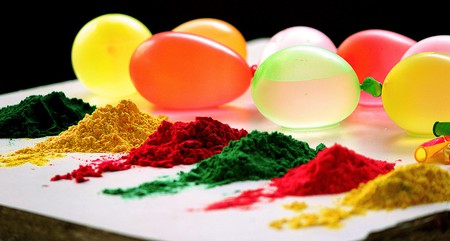 One of the largest Holi festivals is celebrated in Mathura and Vrindavan, which are approximately 58 kilometers from Agra. Hundreds of locals travel every year to attend this week-long festival, with several different events running through the week. Some of the most popular ones are Lathmar Holi in Barsana (played with sticks), Phoolon Wali Holi (played with flowers), and the main Holi festivities on March 13.

This is a rather interesting form of play, especially for women, as they earn a once in a lifetime chance to beat men with sticks! This became part of the celebration when in Hindu history Lord Krishna visited Barsana for Holi where he met Radha and her friends, whom he teased a lot. This offended the ladies and so they decided to take revenge by beating Lord Krishna with sticks and chasing him away.

The event is celebrated in good spirit and the men are prepared for what will happen to them. They come fully padded and try their best to shield themselves. Each year the event is a huge success and thousands of foreigners also come to watch and enjoy the fun.

Time and Distance from Agra: Approximately 2 hours and 30 minutes by car (98km)

Lathmar Holi #2 A 'gop' from Barsana protects himself from the blows of 'gopis' from Nandgaon during Lathmar Holi in Uttar Pradesh Lathmar Holi is a traditional Holi celebration that takes place in the villages of Nandgaon and Barsana every year a week or so before Holi day. Tradition has it that every year the gops of the village of Nandgaon, said to be Krishnas village, visit Barsana the village of Radha to 'tease' the 'gopis', who beat them of with 'Laths' or sticks. #holi #lathmarholi #krishna #radha #festivalofcolours #uttarpradesh #festival #celebration #india #uptourism #indiapictures #indiaclicks #storiesofindia #indiaig #indianstories #desi_diaries #igramming_india #india_gram #gaurdiantravelsnaps #incredibleindiaofficial #_soi #myfujifilm #portraitsofindia #natgeotravellerindia #peopleofindia #indianportraits #everydayindia #mypixeldiary #streetphotographyindia

A short and sweet affair, Phoolon (flower) wali holi is a 20-minute affair that is celebrated at the Banke Bihari temple in Vrindavan. It is the only Holi celebration that is not done with dry or wet colors, but instead with flowers. The temple gates open around 4 p.m. after which flowers are showered on the devotees by temple priests. The best time would be to arrive as soon as the gates open, to allow enough time to be able to take the perfect shot of the flowers mid-air.

Time and Distance from Agra: Approximately 1 hour and 30 minutes by car (71km) 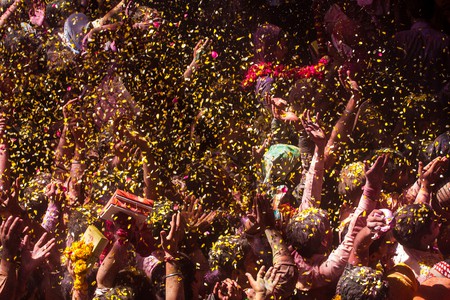 The hub of all Holi festivals, Banke Bihari, is believed to be the birthplace of Lord Krishna. The event here takes place a day before the main Holi festival, and begins from morning till afternoon; the temple gates open and welcome all visitors to come and play Holi. It is an exciting event to be a part of, as the priest throws colors and holy water and the entire crowd chants in unison. Although many foreigners and women also enjoy this celebration, it can become a bit rowdy and ends up becoming a predominantly male event. If traveling from Agra, it would be ideal to stay the night in Mathura, as the main Holi festival, which happens in there, is the very next day. Vrindavan is a short cab or auto-rickshaw ride to Mathura.

The largest Holi festival takes place at Dwarkadheesh Temple. The gates open at 10 a.m. and there is already a large, excited crowd waiting outside to begin the fun. Mostly local men and children participate because the situation does get quite heated. However, many male and female tourists are spotted as well. There’s a lot of drum playing on this day and many people join in and dance to the drum beats. Locals from Agra sometimes only attend this one main event and drive back to Agra on the day itself.

Bhaang (a form of cannabis) is one of the main highlights of Holi and it is legal in the city in the form of Thandai (cold flavored milk). Everyone experiencing Holi for the first time should definitely give it a try. If you head out to Vishram ghat in Mathura slightly earlier on March 13, you can spot priests preparing bhaang for the main event.