Abhishek Majumdar’s The Djinns Of Eidgah: The Ghosts And Conflicts Of Indian Theatre

According to playwright Abhishek Majumdar, Indian theatre is experiencing a cultural boom, and after seeing Majumdar’s new play The Djinns of Eidgah at London’s Royal Court Theatre, this revelation comes as no surprise. Majumdar’s stunning new drama explores the Kashmir conflict, fusing together Islamic storytelling with real life stories and thought provoking politics. 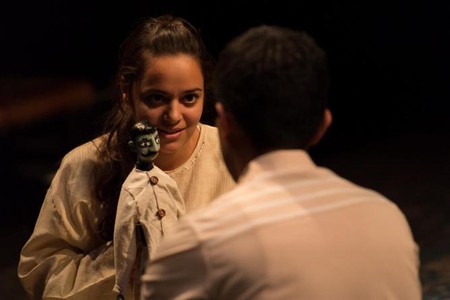 Indian theatre is going through something of a renaissance with a new generation of playwrights bringing bold stories to the international stage. Nowhere is this more clear than at London’s Royal Court Theatre where The Djinns of Eidgah will be performed from 18 October to 9 November 2013.

Written by Indian playwright Abhishek Majumdar, The Djinns of Eidgah is a synthesis of fact and fiction, superbly merging Islamic storytelling with real stories from the ongoing Kashmir conflict. The play is set in contemporary times in the Kashmir Valley, ‘the most militarised place on this planet’, where political tension over ownership has been enduring for decades between India, Pakistan and the people of Kashmir. The narrative introduces us to Bilal and Ashrafi, an orphaned brother and sister who have grown up in this hostile environment. Bilal’s younger sister remains psychologically scarred by the death of their father and it has been Bilal’s responsibility to look after her. Now 18 years old, Bilal has become the star football player of the region and hopes to use his talents to help himself, his sister and Kashmir. However this isn’t the typical story of the underdog amongst a landscape of political tension; The Djinns of Eidgah is a daring depiction of modern politics and spirituality, and through powerful storytelling it highlights the absurdity in both. 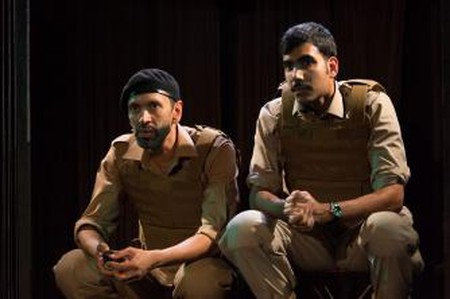 One of the greatest aspects of Majumdar’s play is the multiple perspectives it explores through its characters. From Hindi Indian soldiers ordered to monitor the area, to passionate locals who would rather die than lose Kashmir to Indian authority, to medical practitioners who just want to see an end to the violence, the dynamic range of personalities truly allows the play to investigate a wide spectrum of political ideas. Evident from the two pages of acknowledgements, Majumdar interviewed a wide range of people when researching the play and this factual aspect has enriched the play infinitely.

(From The Djinns of Eidgah play text)

As previously mentioned, the play also utilises traditions of dastaan Islamic storytelling and this further enhances the piece, making it not only a political examination but also a cultural one. Director Richard Twyman describes dastaan as a ‘form which is incredibly theatrical and playful’, and the merging of dastaan with real human stories creates ‘a theatrical piece that is at once both real and completely unreal.’ The play brings djinns to the stage – spirits in Muslim legend that represent pure passion – and in this narrative they interact with the human characters in surprising ways, making the audience question the desires of the characters as well as highlighting the central theme of rationality vs spirituality. 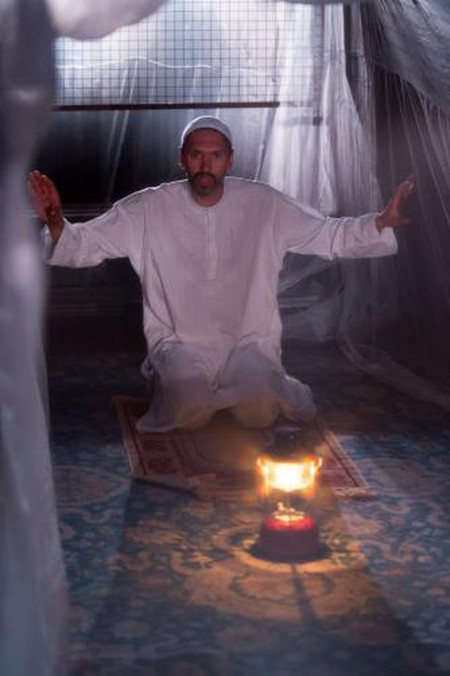 The multiple stories and layers of The Djinns of Eidgah make it a masterful exploration of spirituality, religion, politics, culture and the human spirit, and it is as educationally enlightening as it is emotionally powerful. As Twyman states in an interview, ‘the situation of Kashmir has fallen off the map of Western Politics’, and the play does a successful job of bringing this conflict to mind without pushing an overt political bias. Instead Majumdar’s play offers a story that merges different cultures with distinct perspectives, and overall leaves the audience emotionally moved and interested to learn more.

Abhishek Majumdar is becoming a renowned figure in the Indian theatre scene and has been actively involved in many aspects, working as a playwright, director, teacher and actor. He is currently the artistic director of the Indian Ensemble Bangalore, and has received numerous awards and scholarships for his work and dedication to theatre throughout his career. Majumdar became involved with the Royal Court through one of the theatre’s international programmes, which has worked with nine emerging playwrights from India each year since 1996. The programme is a manifestation of the Royal Court’s commitment to new international writing, and Majumdar’s The Djinns of Eidgah is the perfect example of the cultural benefits that such a programme can reap.

Further demonstrating their passion for Indian theatre, the Royal Court will be presenting a season of readings by Indian playwrights from 12-17 November 2013. Surveying a range of topics and play styles, this events looks to offer a fascinating insight into the emerging voices of India and the future of the country’s theatre scene.

Watch an interview with director Richard Twyman and writer Abhishek Majumdar below:

The Djinn of Eidgah will be performing 18 October to 9 November 2013. To find out more about the play please visit the Royal Court’s webpage.