A Tour Through Mumbai's Historical Neighbourhoods 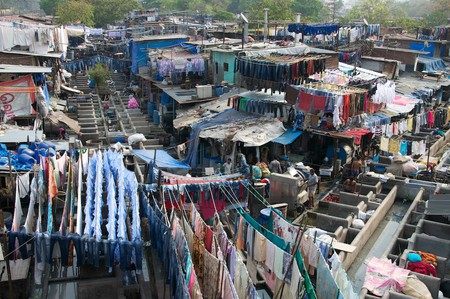 The city of lights, the city of dreams, the city of local trains, maya nagari (a magical city) – Mumbai has different meanings for different people. It’s difficult to tell whether people live in Mumbai or Mumbai lives in them. One thing is certain — there is no other city in India quite like it. 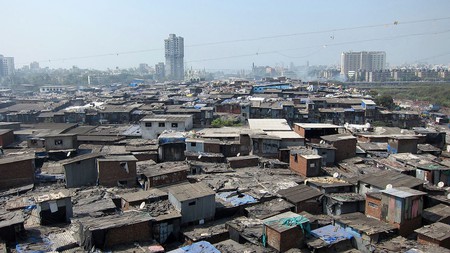 Dharavi houses one of the biggest slums in the world. In the 18th century, it was an island, a kind of mangrove swamp occupied by the Koli fishermen community. The slum was founded in 1880s during the British Raj along with urbanization of Mumbai (then Bombay). The urban area of Mumbai mostly covered the southern extension of the land. The residential areas were segregated between the European and native populations. Dharavi was meant for native people and hence had no planning; it provided the workforce to the growing city. In 1869, the bubonic plague spread in Mumbai (and then most of India) and killed about 200,000 in Mumbai alone (and about 8 million in India). Concerned about the epidemics, British Raj expelled the natives living in Mumbai towards the edge, in the north of the city – to the village of Koliwadas. And thus Dharavi was born. Along with the native population, polluting industries were also pushed to Dharavi, including tannery and pottery, etc. 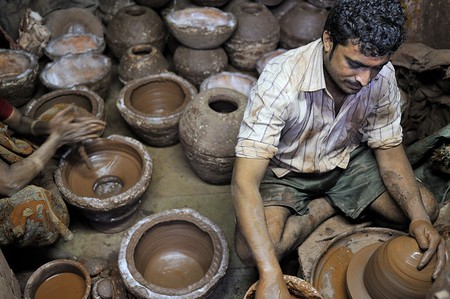 No wonder that today Dharavi is a key supplier and exporter of leather and pottery products. Dharavi houses every major Indian region and religion including Tamils, Gujaratis, UPites, Biharis, etc. – a really diverse population. Guided tours through Dharavi are available for people wanting to know about its various aspects including industrial/residential ones. 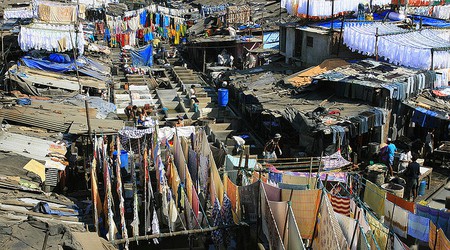 Dhobi Ghat is a well-known area in Mahalaxmi, where the dhobis wash clothes. A dhobi is a traditional laundryman who collects your dirty laundry, washes it, and delivers it neatly ironed at your doorstep. Dhobi Ghat is supposedly the world’s largest open-air laundromat. Hundreds of dhobis clean the dirty laundry of households, hospitals and hotels from all over the city. The clothes are soaked in water, trashed on the flogging stones with an over-the-shoulder move, tossed into starch, and then dried. Then these clothes are ironed, bundled, and home-delivered. Dhobi Ghat came into being to support the officials of British Raj and other native migrants in Mumbai. It has also served as a potboiler of many unfulfilled/struggling dreams for people wanting to make it big in Bollywood/Mumbai. Dhobi Ghat has been used in a number of Bollywood movies as an interesting backdrop. Munnabhai and Circuit live in the Dhobi Ghat area in Munnabhai MBBS and also have an important song sequence and other scenes shot in that area. As a tribute to this area and its dhobis, Kiran Rao made a movie named Dhobi Ghat (Mumbai Diaries) in 2010, starring her husband Amir Khan.

Mahim was one of the seven original islands that formed Mumbai, when it was known as Mahikawati. Raja Bhimdev, one of its famous rulers, ruled over the region in the 13th century and built first Babulnath temple, a palace and court of justice in Prabhadevi. In 1343, the island was captured by Muslims from Gujarat who built the old Mahim mosque and the dargah (shrine) of Makhtum Fakir Ali Paru. After the British acquired Mumbai, they built the Mahim Fort in the 1660s to protect themselves from the Portuguese. 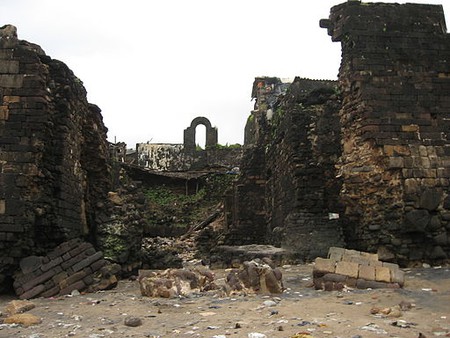 The Mahim Causeway, an important link road connecting the city with its northern suburbs (connecting Mahim and Bandra), was built between 1841 and 1846 to connect the island of Salsette. British East India Company had refused to fund this project at that time, and it was then funded by Lady Jeejeebhoy with a condition that it would not charge a toll for its use or disturb the nearby Koli community. The Mithi River drains into Mahim Creek, which further drains into Mahim Bay and forms the border between the city and suburbs. Modern Mumbai’s famous icon Bandra-Worli Sealink runs over Mahim Bay. 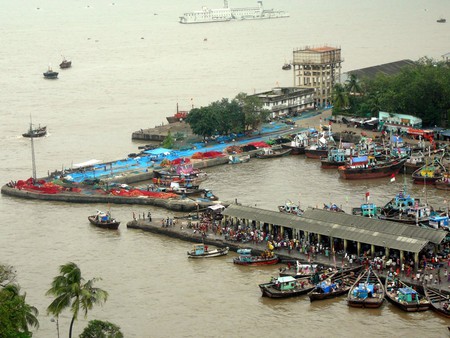 It is one of the southernmost parts of the Mumbai City. Colaba Island was one of the seven islands of Bombay ruled by the Portuguese. The Portuguese continued to occupy Colaba after the seven islands of Bombay were given to Charles II of England as a dowry when he married Catherine of Braganza in 1661. They held on to Little Colaba Island until 1762 before ceding it to the English, subject to the retention of Portuguese ownership of a house on the island that is now the Blessed Sacrament Chapel in the middle of Colaba. The Cotton Exchange was opened at Cotton Green in 1844, converting Colaba into a commercial centre. Trade activities flourished with the development of nearby docks and the rise of industries. With this, we can imagine how Colaba has been of historical importance for development of Mumbai and India. Most of the buildings in Colaba were planned and built during the British Raj, and thus reflect modern European architecture. Most of the area has been accorded heritage status. It houses many present-day Mumbai landmarks, including the Gateway of India, Taj Mahal Palace hotel, Leopold Cafe, Café Mondegar, Regal Theatre, etc. Nearby places include Marine Drive, Nariman Point, Fort and Crawford Market. 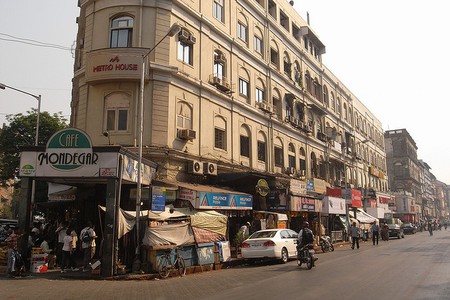 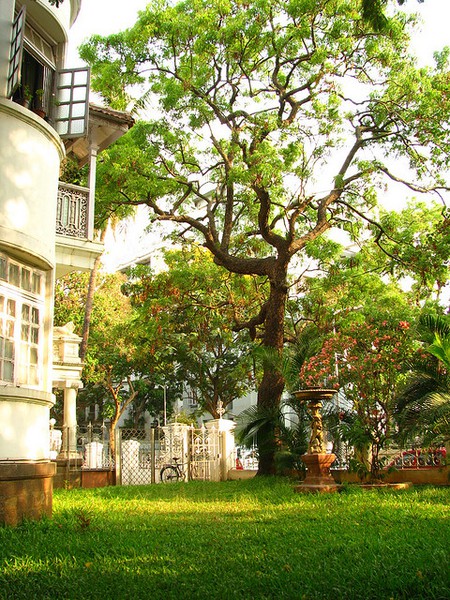 This upper-class colony in midtown south Mumbai probably houses the largest concentration of Parsi people in the world, a community with a threatened future. It was developed by the British in 1899-1900 through the efforts of Mr. Mancherji Edalji Joshi, under the Dadar-Matunga-Wadala-Sion scheme, which was the first planned development scheme in Bombay. It was built as a residential heaven for Parsis, far from the plague-ridden and congested ‘Fort.’ It is different from other Parsi colonies (called baugs, meaning garden) because it is not isolated by walls or fences and is very much a part of its surroundings. The Dadar Parsi Colony is also famous for the Five Gardens. It is a breath of fresh air in this very congested city desperately running out of breath. Every day, thousands of Mumbaikars flock to this colony for a daily walk in its gardens. It’s been recently witnessing a citizen movement against the allotment of space to hawkers by the municipality. 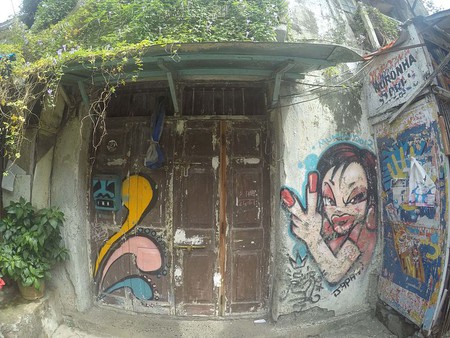 Bandra is probably an adaptation of the Persian word bandar, which means port; another possibility is an adaptation from the Marathi word vandre, also meaning port. It used to be a tiny fishing village. From 1534 to 1775, Bandra was ruled by the Portuguese, before it became part of the British Raj with the signing of the Treaty of Surat. Hence, it has very strong cultural and architectural references to those bygone eras. Many churches are built throughout Bandra including Mt. Mary’s Church and St. Andrews Church. To support the strong presence of European missionaries and resulting conversions in Bandra, there are many famous educational institutes in this area. Part of the first railway service in India, Bandra is one of the busiest stations today. While west Bandra is known for fashion, film fraternity, promenades, and a very strong cultural and urban art scene (vibrant graffiti scene, Cultural centres and new and eclectic dining and entertainment) East Bandra has become a commercial, industrial, and administrative hub. Recently it’s become a pit-stop for tourists looking to photograph the iconic Bandra-Worli Sealink. 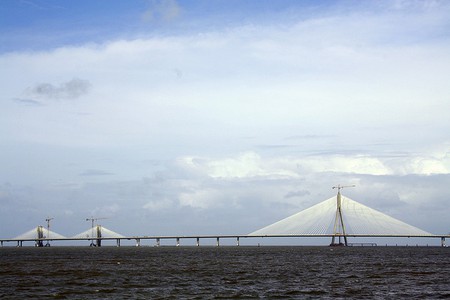 Kamathipura’s claim to fame (or infamy) is in being Asia’s second largest and Mumbai’s oldest prostitution hub. Like Byculla, Kamathipura also became inhabitable after the completion of the Hornby Vellard Project. Earlier known as Lal Bazar, Kamathipura got its present name from the Kamathis (workers) of Telangana who started settling here while working at the construction sites. At one point in time, it was also home to a Chinese community. In the late 19th and early 20th centuries, a large number of women from Europe and Japan were trafficked into Kamathipura, to serve British and Indian men as prostitutes. Later, it grew into one of the biggest red light districts of India, with Indian sex workers. The 1970s and 1980s also saw the rise of places like Bachchu Ki Wadi with its famous kothas and mujras. It was frequented by the famous and rich, including gang lords of the Mumbai underworld. Ironically, the area is also known for a small cottage industry run by some 200 women who roll beedis (thin, hand-rolled cigarettes) to make a living.

Byculla was originally an extension of Mazagaon, one of the seven islands of the original Bombay. After the seven islands were joined into one city by the Hornby Vellard project in 1784, and following the construction of Bellasis Road Causeway in 1793, affluent Europeans started shifting to Byculla. Byculla was one of the original stops on the first railway line in India connecting Bombay to Thane. The original wooden structure of this stop was rebuilt into a station building in 1857 and is considered to be the oldest railway station in the country. Once a home to the wealthy, Byculla has housed diverse communities like Parsis, Iranis, Christians, Jews, Portuguese, Marathis and Muslims.

During 1936-37, there were intense riots in Byculla during the Temple-Mosque dispute. Today, Byculla is primarily a Muslim population hub, with the added recent increase of the population of Dawoodi Bohra and other traditional Muslim communities. Byculla is also known to be the initial hub of Mumbai’s underworld, with the rise of Akharas (wrestling joints) in its by-lanes. It is also home to the newly-restored Bhau-Daji Lad Museum, most definitely worth a visit to see its stunning and modern exhibits