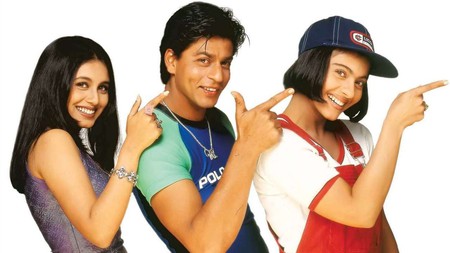 Bollywood has given us a fair share of tearjerkers over the years. From the heartbreaking Kaagaz Ke Phool (1959) to the recent Ae Dil Hai Mushkil (2016), desi movies have got us crying our hearts out more often than not. But there are many reasons why Kuch Kuch Hota Hai (1998) could be the biggest tearjerker in contemporary Bollywood cinema. The incredibly popular college love triangle drama starring Shah Rukh Khan, Kajol and Rani Mukherjee got the whole country weeping – and we’re about to give you the seven main reasons why. P.S. Spoiler alert!

It’s all too painful to watch a young Anjali (Kajol), hopelessly pursue Rahul (Shah Rukh Khan), her best friend who she happens to be head over heels in love with, only to see him fall in love with someone else – i.e. Tina (Rani Mukherjee), the new girl at their college. She awkwardly tries to mimic Tina’s style, among other vain attempts to win Rahul’s heart till it becomes painfully evident that she means nothing to him. Cue the super sad song Tujhe Yaad Na Meri Aayee where amidst pouring rain Anjali decides to run away from college and her life as it is, and we’re bawling.

Love her or hate her for dampening Rahul and Anjali’s friendship, Tina’s untimely death during childbirth – shown at the very start of the movie – sets an inescapably gloomy tone throughout. Add to that a teary eyed Rahul weeping at the loss of the love of his life, and we dare you to keep your eyes dry.

Tina’s letters to her daughter

If Tina’s death isn’t sad enough, we are reminded of her loss throughout the movie via letters she wrote to her then newborn daughter, Anjali Khanna. With eight letters, to be given to Anjali K on each of her first eight birthdays, Tina’s presence is felt and she connects with her daughter even though she isn’t physically present. Her daughter reading the eighth and final letter is simply heart wrenching – it is the last she will hear from her mother.

Rahul’s woes as a widower

Even eight years after his wife’s death, Rahul is fragile and alone. But his efforts to mask his misery and raise his daughter as a single dad are heartwarming to say the least. One scene in particular, when Rahul steps in as his daughter freezes before a large audience at a school event when asked to speak on the importance of a mother is nothing but a recipe for some hardcore bawling.

Rahul tries to do all that he can for his daughter, Anjali K, to make sure she has a joyful, fulfilling childhood, and she too goes out of her way to bring him happiness. Sensing her dad’s loneliness, she sets out with some help from her grandmother to find his long lost friend, Anjali, in hopes that they will reunite and maybe even find love.

Rahul and Anjali’s meeting after years of having no contact is sad for too many reasons. It brings back nostalgia for their college days and for when they were best friends. Second, Anjali is clearly not over her feelings for Rahul and finds herself feeling as helpless as she did years ago. There’s also a power tilt in the relation – the once popular and energetic Rahul is drained, aloof and alone whereas Anjali has got her glow on like never before.

Kuch Kuch Hota Hai has given us some of the most recognized tunes in Bollywood history, and they’re all pretty melancholic. With heartfelt lyrics, apt timing and emotion-heavy backstories, each of the many award winning songs in the film’s soundtrack are all tearjerkers in their own right, further boosting this movie’s position as one of the most cry-inducing of all time!