10 Songs For Your Perfect Holi Playlist 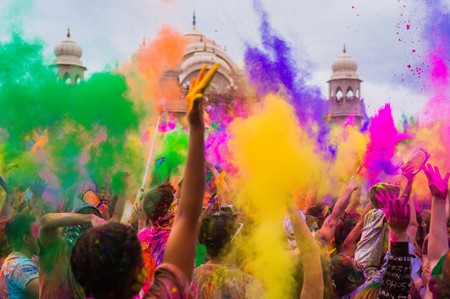 Holi, the festival of colors, is almost here. While homes are cleaned, delicacies are prepared, and colors brought from the market, one very important prerequisite is the presence of the must-play Holi songs. Bollywood has provided us with a wide variety songs to allow our characters to shine, so here is a list of 10 must-have songs during Holi.

This song from the 1970 film Kati Patang was brought to life by Asha Parekh and Rajesh Khanna, bringing romance, fun and open flirting out in the open.

Anu Malik crooning to ‘Do Me A Favourrrr, Let’s Play Holiii!’ from Waqt, starring Akshay Kumar and Priyanka Chopra, is a must amongst the younger crowd.

This song from the Yash Raj camp was yet another blockbuster like all of the other songs in the movie. A sure hit amongst those who are in love, this is yet another must-play song at Holi parties.

This 1993 movie starring Sunny Deol, Juhi Chawla, and Shahrukh Khan brought a change in the kind of roles played by lead actors. And along with it came this song, which is a favorite amongst Holi enthusiasts. Add this to your playlist and have fun.

This evergreen song from the ever popular movie Sholay is a hit amongst all generations and simply cannot be missed when you are totally immersed in playing Holi.

No Holi party is complete without people getting high on bhang and dancing to this song from Silsila. It is a must in your Holi playlist.

Probably the most recent gift from Bollywood for Holi parties, this song is yet another must-play. The fun level in the song takes the existing entertainment factor at the party up by a couple of notches.

Amitabh Bachchan has given us some amazing Holi numbers. This item from Baghban is a yet another favorite amongst people of all age groups.

This song from the 1985 film Aakhir Kyun depicts the festival of Holi beautifully, and its lyrics, too, are exactly what the situation demands.

How can any Holi party be complete without bhang? And where there is bhang, there has to be this song featuring Rajesh Khanna and Mumtaz.