Where to Find the Best Street Food in Beijing 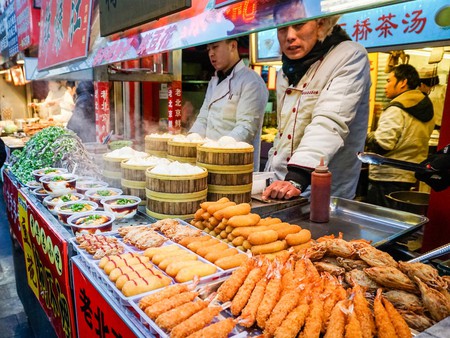 Fans of roadside eating will fall in love with the Chinese capital, as it is famous for its variety of halal street snacks so various and numerous that Beijing has bars dedicated exclusively to local snacks. From snack bars to the street vendors that only locals know, Culture Trip summarizes for you the places to find the best street food in Beijing.

This Beijing snack bar has nearly a hundred locations in Beijing, all of which can satisfy those hungry for traditional Beijing street food, from sweet pea cakes to salty beef buns. The first Huguosi Snacks was founded in the 1950s, when the government assembled some street food vendors famous at temple fairs into one snack bar on Huguosi Street. That’s why the snack bar is named Huguosi Snacks.

Although there are quite a few restaurants that serve the traditional Beijing snack miancha (flour tea), it is the Daxing Hutong Miancha, a small, red-door breakfast spot hidden in Nandaxing Hutong that locals really can’t take their minds off. The eatery is a small business run by a couple who have been providing the most original, down-to-earth flavor to fans of the thick, brown porridge for years. Although the shop’s location is a bit of a challenge to find, it’s not a problem for foodies as they can easily find it by the aroma.

Located in the Niujie neighborhood, which has the largest concentration of Hui people in Beijing, Bai’s offers a wide range of traditional halal snacks – thus essentially the entire range of traditional Beijing street snacks, since they originate for the most part from halal foods. Some people believe that the snacks at Bai’s are even better than the ones at Huguosi Snacks, so it’s definitely worth a try. Bai’s also sells glutinous rice cake, a sweet snack from Xinjiang.

You might find it hard to believe, but the word “cheese” in Beijingers’ dictionary is not the same as in the Westerners’ dictionary. For locals, cheese is a kind of imperial court dessert made out of milk, sugar and rice wine. One of the best places for such a dessert in town is the Wenyu Cheese Shop in Nanluoguxiang. It’s always packed with foodies, so you need to arrive early to make sure you can get a taste of the authentic Beijing cheese.

Here at Baoguang, with only a little more than 10 RMB (US$1.50), you may be able to taste its signature snack: xunrou xiedi huoshao (smoked pork sole bun). The reason that it is named “sole bun” is because the surprisingly large size of the bun looks just like the sole of a shoe. The snack is said to originate from Hengshui, in Hebei province, and Baoguang is believed by many to be the only place in Beijing that provides the authentic snack. Apart from that, it also combines the sole bun with sliced pork knuckle and pork intestines.

The traditional Beijing snack douzhi (mung bean milk) is quite notorious for its potently sour taste and smell, but it’s a snack for which anyone who wants to try Beijing snacks cannot avoid (come on, aren’t you even curious about the taste?). Even if a lot of people can’t handle more than one sip of it, there are, of course, some people – not only locals – who are deeply in love with it. Lao Ciqikou Douzhi is a snack shop dedicated to douzhi. It also provides other Beijing snacks, such as jiaoquan, lvdagunr and meat pie, to go with the douzhi.

Open In Google Maps
Opposite to the North Gate of Tiantan, Dongcheng District Beijing, China
+861067028907
Give us feedback

People who know written Chinese will instantly know what type of food the restaurant specializes in, as the “huihui” in the restaurant’s name has been the nickname for Hui people since the Ming and Qing dynasties. Here you can have lvdagunr, wandouhuang and aiwowo, all traditional halal Beijing snacks, as well as the famous steamed roll (tanghuajuan) with sugar, which because of its appearance is hailed as “Chinese dirty dirty bread.”

Snack Bar, Chinese, $$$
Facebook
Email
Twitter
Pinterest
Copy link
Share
Map View
Bingtanghulu (candied hawthorn) is a sweet-and-sour street snack that many, especially children, will find addictive. Only a genius would think of wrapping Chinese hawthorns in a sugar coating. Though there are quite a lot street vendors that sell bingtanghulu in Beijing, Helude is worth a special visit since it also shows the process of making bingtanghulu.
Open In Google Maps
Inside Wu Mart, 528 Dongsi Beidajie, Dongcheng District Beijing, China
+8613801091689
Give us feedback

Read more about Beijing’s street food in our article: 10 Specialties that Prove Beijing has the Best Street Food in China.