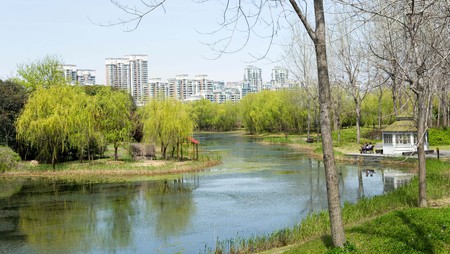 One of the biggest green spaces in sprawling Shanghai, Century Park offers the opportunity to get some reprieve from the bustle of the city. Stay in one of the best hotels near this idyllic spot.

Shanghai has 24 million inhabitants, making it one of the biggest metropolitan areas on the planet. Much like Hyde Park in London and Central Park in New York, Century Park is an enormous verdant space in the heart of the city, breathing some much needed green life into an otherwise concrete jungle. These are the best hotels near the leafy green oasis, where you can wake up to views over the sun-dappled trees. 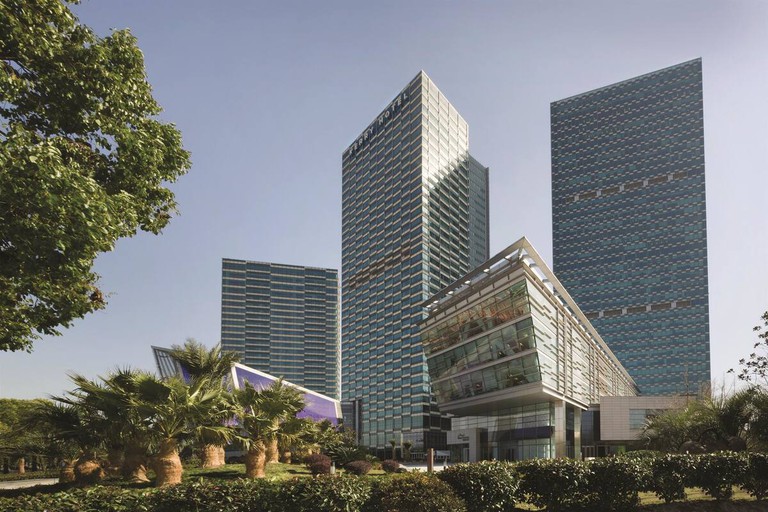 Courtesy of Kerry Hotel Pudong Shanghai / Expedia
View Rooms
This hotel in the Kerry Parkside complex lies in the middle of Pudong, with 574 ultra-modern units all boasting views of Century Park. The hotel is also home to a full-service spa, indoor pool, 24-hour fitness centre and four restaurants – including The BREW, where a brewmaster makes craft beer. For those after a traditional dining experience, book into Blossoms, a series of private dining rooms that serve up a Cantonese-focused menu of Chinese specialties. The hotel is particularly good for families, providing babysitting and childcare services, a special children’s pool, a kids club and an on-site playground.
EVERYTHING YOU NEED TO KNOW 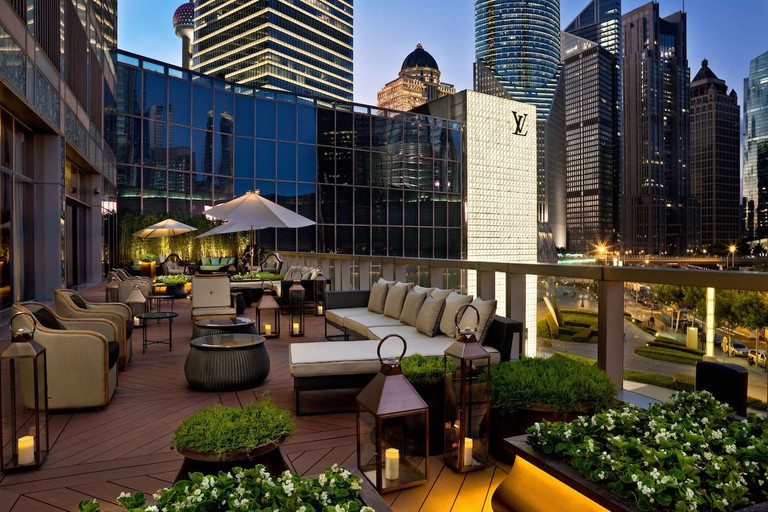 Courtesy of IFC Residence / Expedia
View Rooms
The glamorous rooms in this luxe apartment-hotel are decked out almost entirely in shades of beige – and have everything you need for opulent privacy, with their fully equipped kitchens and high-tech ultraviolet light air and water disinfection. The hotel has an enormous outdoor terrace surrounded by Shanghai skyscrapers, so you can have a nightcap while the lights of the city twinkle like stars around you.
EVERYTHING YOU NEED TO KNOW 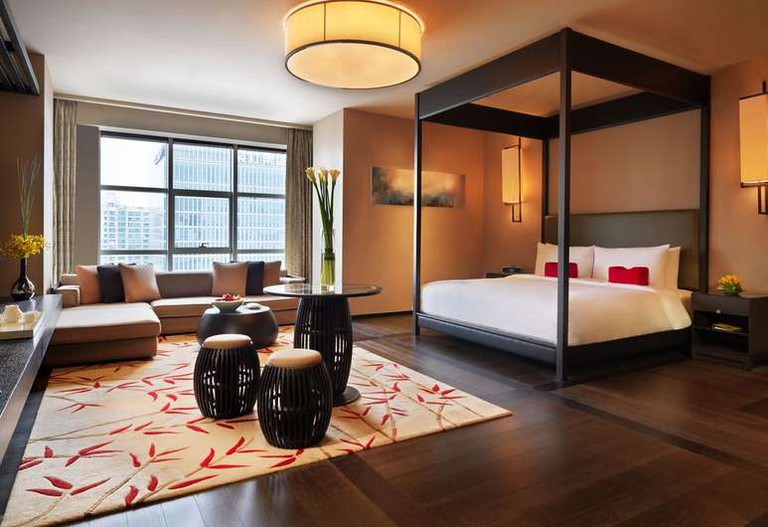 This hotel’s design was inspired by the elements of feng shui and every one of its 403 suites harmonise with the nearby Century Park. The five-star Jumeirah Himalayas Hotel is a landmark of the Pudong area, from the opulent 16-metre-high (53-foot-high) lobby to the two prestigious in-house restaurants, the 5,000sq m (16, 404sq ft) infinity garden and the luxurious wellness retreat. 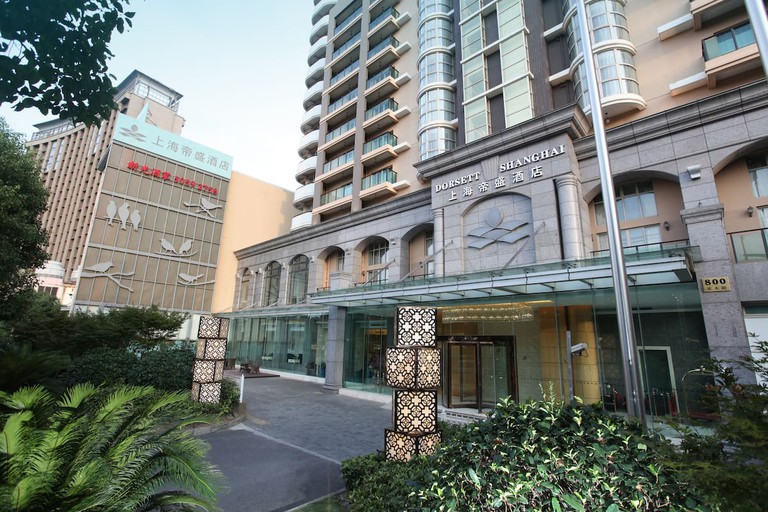 Perched on the banks of the river in the middle of Century Park, this four-star high-rise is a slice of luxury in central Pudong. The 264 swanky rooms showcase a quirky, colourful design as well as flat-screen TVs and spacious balconies with park views. The two trendy restaurants, two hip bars and terrific business centre are a big plus for those travelling for work. 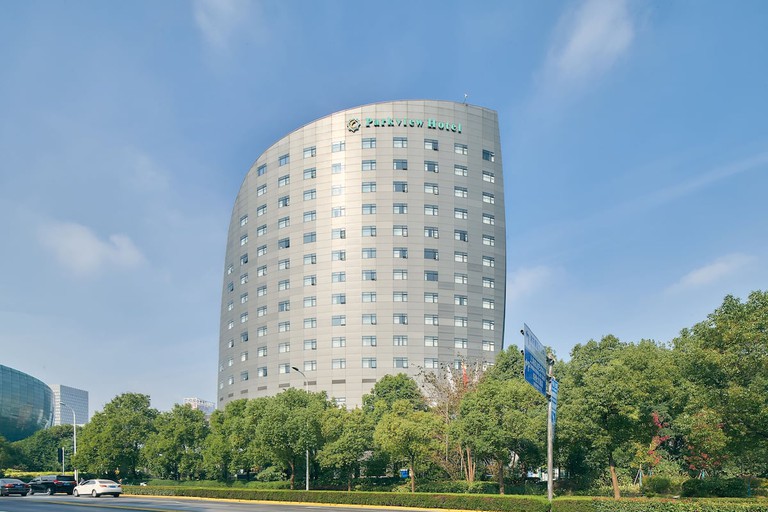 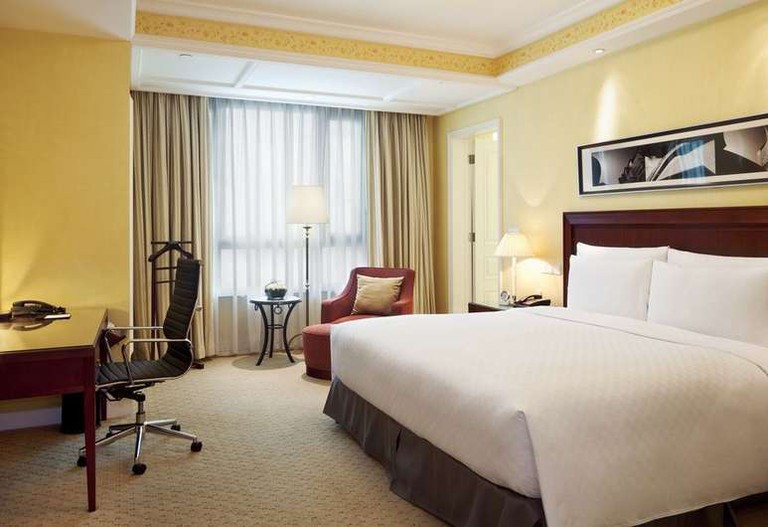 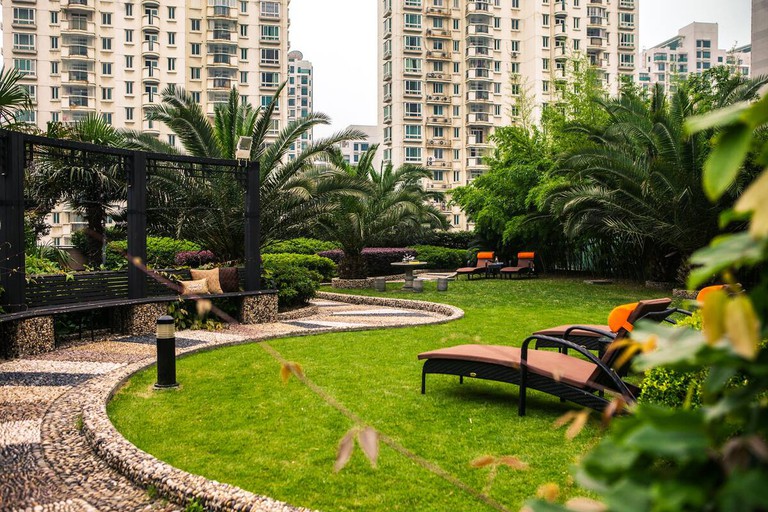 This five-star hotel sits on the edge of Pudong’s thriving business district, hosting a range of events in its palatial event spaces. Only steps from the green leaves of Century Park, these 363 rooms connect guests with three in-house restaurants, a fully-equipped gym, a business centre, a generous outdoor pool and a sunny rooftop terrace. 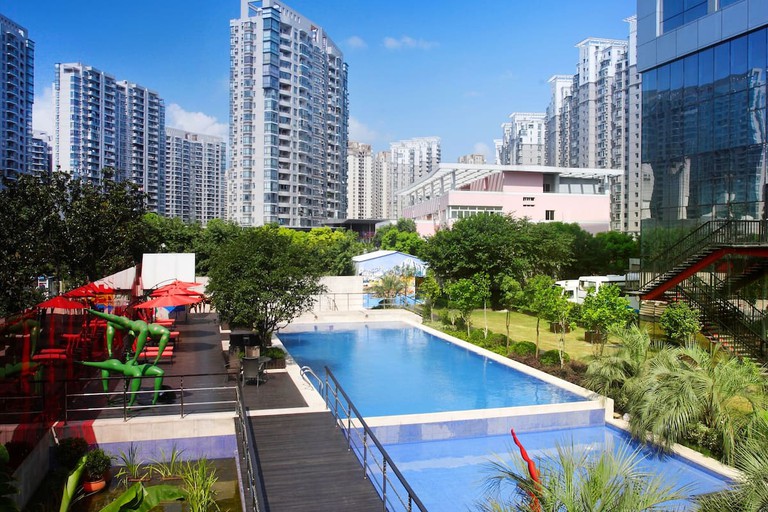 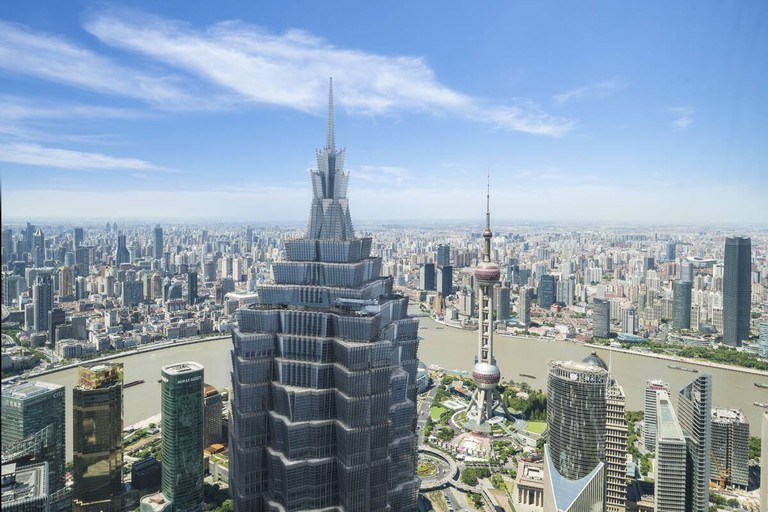 Courtesy of Grand Hyatt Shanghai / Expedia
View Rooms
Housed in the Jin Mao Tower – a structure that wouldn’t look out of place on the futuristic set of Blade Runner – staying at the Grand Hyatt Shanghai can feel like sleeping in the sky. Its eight restaurants and bars include Cloud 9 – the bar located at the pinnacle of the building on the 87th floor – where you can sip cocktails with 360-degree views of the city. Rooms combine Chinese decor with Art Deco accents – think Chinese calligraphy running the length of a wall alongside mid-century furnishings, while each room comes with a spectacular view of the city.
EVERYTHING YOU NEED TO KNOW