The Best 24-Hour Restaurants in Beijing 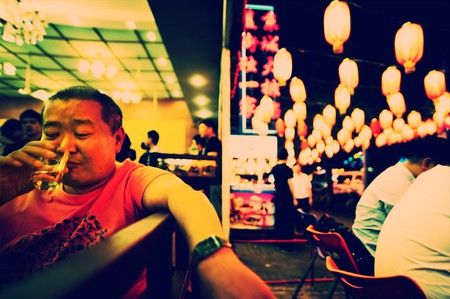 Looking for some good food in the wee hours of the night? Although Beijing is not as famous for its nightlife as some southern Chinese cities, it does have a spectrum of 24/7 restaurants for night owls. Here are the best ones to check out.

No Chinese hot pot fans should miss Haidilao, one of the top names in the hot pot world. Other than providing the better-than-default wide range of ingredients and pot flavors, the Haidilao is especially famous for its ultimately considerate service – such as providing a hair band for those with long hair, or offering a plastic bag to each customer to protect their cellphone from the steam. It’s no wonder why Haidilao has branches all over China (and even outside of China, too).

Jindingxuan is the 24/7 go-to place for those who are fond of Cantonese dim sum. From the most iconic shrimp dumplings to egg tarts, to even the snacks from other parts of China, such as the Sichuan maocai (instant boiled spicy hot pot), Jindingxuan will satisfy you no matter what time of day. While it has dozens of locations in Beijing, the most recommended is without a doubt the Ditan branch – you’ll know why when you see its magnificent storefront.

If you feel hungry but can’t figure out what to have, then Zhangji Pingwa Sanbao would be a good choice, as it is like a canteen, only fancier, that provides dishes from different Chinese cuisines at the same place. Here you can find Chinese chuan (BBQ), Shaanxi’s rougamo and Xinjiang’s natural yoghurt. While it has multiple locations in Beijing, not all Zhangji Pingwa Sanbao are open 24 hours a day, so it’s best to check the particular location before you go.

The Bridge Cafe is one of the few places in Beijing where you can feel free to study or work 24 hours a day. It’s quiet. It’s spacious. (Three floors!) There’s a smoking area and a non-smoking area, and there’s even a rooftop area. And above all, the coffee and Western food are not bad. No wonder it’s so popular, especially among the students in the Wudaokou area.

Speaking of 24/7 restaurants in Beijing, Guijie (Ghost Street) is a place that cannot be forgotten. It is the precursor to Beijing’s 24-hour restaurants – the first ever 24-hour restaurant in Beijing was opened here in the 1980s. And one reason that it is still nicknamed Ghost Street today is because of the many restaurants on the street that never close. Jialinglou Chanzuicheng’s main location is one of them. The restaurant is especially famous for its sautéed bullfrog in chili sauce, so famous that it’s common to see queues in front of it as late (or early?) as 2am.

For those who find donkey meat acceptable, the Wang Pangzi Donkey Meat Bun’s Gulou branch is an ideal 24-hour budget restaurant. The donkey meat bun originated from Hebei Province, and has become a popular snack in Beijing and Tianjin, as some people believe donkey meat is good for your health (plus it’s really delicious). There are also cold vegetable dishes and several kinds of porridge and soups to choose from. Besides, the restaurant is located not far from the Houhai.

Club Xindi is in fact a 24-hour home party place, offering space, drinks, and a set of games including classic board games and mahjong. But better than other home party clubs in Beijing, Club Xindi has the Sichuan cuisine dishes that won’t be dwarfed by any other professional Sichuan restaurants. It is better to make reservations in advance.