Spotlight on a Chinese Province: Ningxia 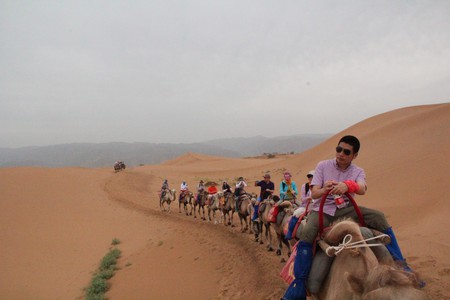 Ningxia Hui Autonomous Region, located in the diverse northwest, is one of China‘s most sparsely populated provinces. One third of all residents identify as Hui Muslims, one of China’s 56 ethnic minority groups. Despite its relatively small size, the autonomous region contains a variety of landscapes, from desert to grassland to flood plains. Historically, Ningxia has changed hands many times. It was founded by the Tangut people as part of the Western Xia Dynasty, then came under Mongol control under Genghis Khan. In the twentieth century, Ningxia joined neighboring Gansu province before being established as an autonomous region for the Hui people.

Yinchuan is the capital and largest city in Ningxia, but remains one of China’s smallest cities with only two million residents. It is governed largely by the Hui people and represents a Muslim stronghold within China, with Nanguan Mosque being the center of religious activity. Visitors will not be disappointed by what Yinchuan and the surrounding region has to offer, including the Xixia Tombs and Sand Lake. Xixia is comprised of nine tombs of Western Xia kings and over 140 tombs of other aristocrats from the regional dynasty that lasted from 1038 to 1227 AD. Sand Lake is one of Ningxia’s biggest tourist draws, with unique natural scenery and exciting activities like dune sliding, windsurfing, and water-cycling. This meeting of reed marshes and desert is home to over 140 species and typifies the contrasting geography of the area.

Perfect Roundabout from Above by @by.harper #fubiz #street #aerial #photography #inspiration Mention @fubiz if you want to be featured on our Instagram

The third largest city in Ningxia by population, Guyuan is home to the Xumi Mountain Grottoes, a collection of over 130 Buddhist caves, dating back as far as the fifth century. In one of the caves is an impressive 65-foot Maitreya Buddha.

Forming the border between Ningxia and Inner Mongolia, the Helan Mountains, known historically as the Alashan Mountains, are part of a dry desert range that runs parallel the Yellow River. The mountains are open to hiking and are home to a dramatic rope bridge that will make anyone even a little afraid of heights quite nervous. Here you will also find cliff carvings dating back over 10,000 years. The eastern foothills are increasingly being turned into vineyards for China’s biggest wine brands, including Changyu and Dynasty.

I love mountains, probably even a little more than the sea~ 😍👌🏼 haha! #shyeworktravels

The name 108 Stupas gives away just what this popular tourist destination offers. Constructed during the Western Xia dynasty as part of a Buddhist temple complex, the stupas have undergone extensive renovation in the years since and are the site of several Tangut-script Buddhist texts. The number 108 holds great significance in Buddhist theology, representing the types of worries a person encounters in his or her life.

As expected, Ningxia cuisine is dominated by Muslim halal restrictions, meaning that pork is out of the question, and all meat is meticulously prepared. Mutton is a staple in many dishes, as are goji berries, which are native to Ningxia.