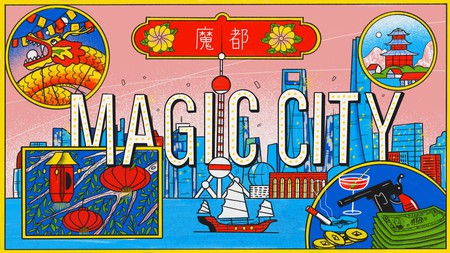 For many, Shanghai is Mo Du, the ‘Magic City’. But where did this nickname come from and what spell has it cast over China?

For many in modern China, especially those who grew up poor in its smaller inland towns and villages, Shanghai is a beacon promising work and wealth – it is Mo Du, the ‘Magic City’.

To understand the magic of Shanghai today requires looking through a crystal ball into the past. For much of the 19th century, a selection of European powers partly controlled Shanghai. They used the port city to trade goods and set up powerful international infrastructure, building stronger roads, new railway lines and providing gas and electricity. It was during this time that the British began calling Shanghai ‘The Paris of the Orient’, a name still remembered today.

By the turn of the 20th century, Shanghai had become a cultural, economic and intellectual melting pot. Amid all this trade and growth, many Japanese people made their way to Shanghai – one of whom was the writer Shofu Muramatsu.

In 1923, Muramatsu had settled in Shanghai to pursue a personal interest in Chinese culture and immediately began making connections within the city’s high-brow arts circles. Surrounded by inspiration, it only took him one year to produce his novel, 魔都 (Mato). In English, the name translates to ‘Demon City’.

The novel depicts Shanghai’s hidden underbelly of violent crime, gang warfare and drug addiction. Muramatsu was particularly fascinated with how this all existed beneath the more glitzy, public face of Shanghai: one of modernity, engineering and wealth. In the context of all these dark, wider themes, the name Demon City makes sense.

In Japanese, 都 (to) means ‘metropolis/capital’. You’ll find the same character in the kanji for Kyoto 京都 (meaning ‘Capital City’). It also means roughly the same in Chinese, where it is pronounced ‘du’.

Yet here is where the name gets interesting; in Japanese, the character 魔 (ma) translates to ‘demon’. However, the Chinese translation for this same character (where it is pronounced ‘mo’) is ‘magic’, giving the novel the title of Magic City. Local Shanghainese were so taken by this name ‘mo du’, of course, that they have made it their own, keeping the spell that Muramatsu first cast over the city alive.

After Muramatsu returned to Japan, the name ‘Magic City’ began circulating among locals, and what kept this name alive was the draw that Shanghai had. Like moths to a flame, people from all over China flocked to Shanghai – then, as now, the country’s economic capital – spellbound by the glamour and the bright lights. It offered the promise of a better life. Upon arriving, most found that their pockets began to fill and their lifestyles improved.

As its wealth has increased, Shanghai’s role as the place to fulfil a sort of ‘Chinese Dream’ has endured. Even today people travel from their villages to Shanghai to find some of this magic for themselves.

For 200 years, what was once a small port town has transformed into the financial, economic and international beating heart of China. Shanghai has, in a sense, made a very real transition from ‘Demon City’ to ‘Magic City’ – a place where possibility and prosperity are no longer grand illusions.