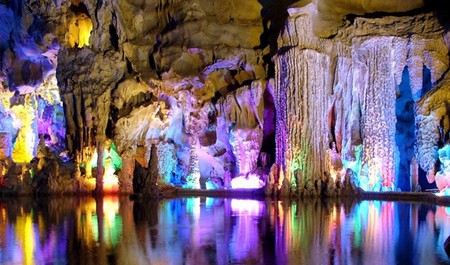 Guilin, with its enchanting karst mountains and picturesque countryside, is one of the most popular travel destinations in China. Find out more about Guilin’s fabulous Reed Flute Cave, a colorful, must-see geological wonder.

How was the Reed Flute Cave formed?

Like all karst topography, the Reed Flute Cave is the result of millions of years of water erosion wearing away the layer of limestone bedrock on the surface of the earth. As cracks formed in the limestone bedrock, water flowed into these cracks, creating drainage systems that eventually became full-fledged caverns, such as Reed Flute Cave, which took shape about 180 million years ago. 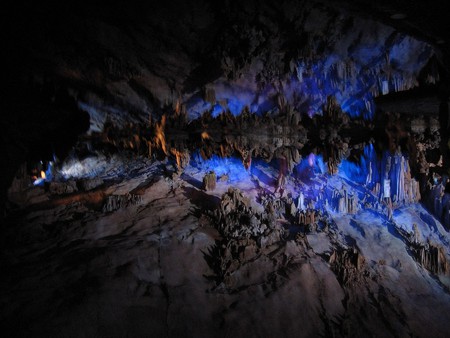 Guangxi, Guizhou, and Yunnan in South China have many such caverns, but the Reed Flute Cave is one of the most stunning, and has attracted visitors for over 1000 years. The cave gets its name not from the shape of the cave, but from the reeds that grow at the base of the cave, which are used to make flutes. 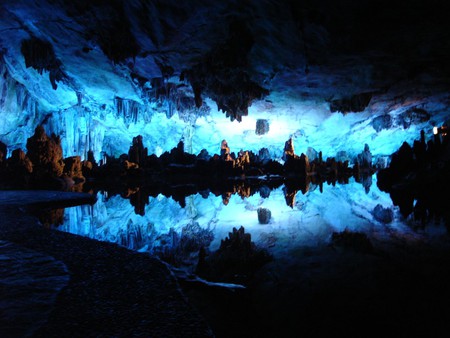 The Reed Flute Cave is filled with various stalactites and stalagmites, which are named according to what they look like and the legends surrounding them, Crystal Palace, Fish Tail Peak, and Dragon Pagoda. One giant stalactite is said to have been the magic spear of the Dragon King, used by the Monkey King Sun Wu Kong in in the Chinese Buddhist classic, Journey to the West. 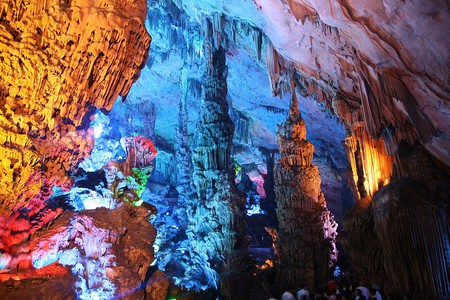 What’s more, the walls of the cave have calligraphy inscriptions, mostly poems and travelogues, from visitors dating back to the 8th century, the Tang Dynasty, giving perhaps a glimpse of a medieval Chinese version of graffiti. The Reed Flute Cave’s more recent history places it as a crucial location in the Sino-Japanese war, when the local people used it as a hiding place and refuge. Hospitals and newspapers operated from inside the safety of the cave, impervious to Japanese bombs. Nowadays multicolored lights paint brilliant pictures on the walls of thecCave, aiding the natural magical aura and giving the cave an almost otherworldly air. 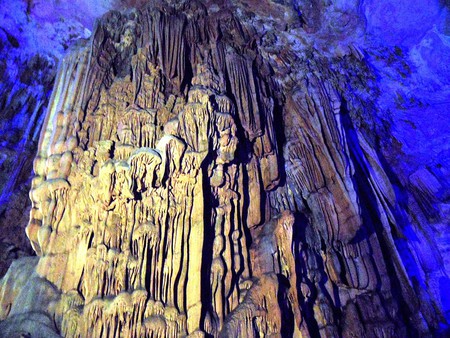 How to see the cave

The Reed Flute Cave is relatively close to Guilin’s city center, only 5 kilometers from downtown, and is easily accessible via the city bus route 3, making it perfect for a half-day jaunt during your stay in the city. The Reed Flute Cave is open year round from 8:00 a.m. to 5:30 pm, but expect big crowds during national holidays such as May 1, October 1 and the week of Chinese New Year. Plan about two hours for a visit, and remember to bring a light jacket or sweater, as it can be chilly and damp underground. The cave is a relatively easy walk for children and the elderly, without many steep climbs. Take home an actual reed flute as a souvenir, you’ll find them for sale outside the cave. 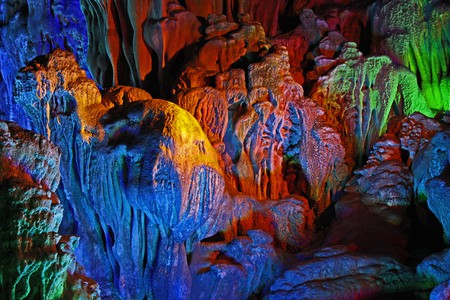