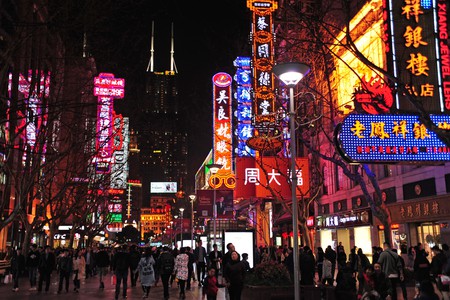 Every type of night out is on offer in Shanghai. From low-key lounge bars to neon-lit roller discos, here is Culture Trip’s guide to everything you need to know about Shanghai’s clubs.

Shanghai has always enjoyed its status as an alluring entertainment spot, from its swinging jazz clubs in the 19th century to its sprawling rooftop bars today. While lots of cash usually helps fuel a night out here, that’s not to say an expensive night is the only type of night you can have. In fact, perhaps because of this, it has helped launch a burgeoning underground scene, which has given birth to a number of impressive, home-grown DJs. Whatever type of night you’re after, you’ll find it in Shanghai.

As China’s second-most populous city with over 26 million citizens (Guangzhou pits them to the post with 45 million), it’s safe to say Shanghai caters to a varied crowd. With a huge number of migrants, businesspeople and travellers flocking to the city, life here is best lived in the fast lane. This is telling of its nightlife scene, with many new bars replacing old haunts or rebranding as an even bigger, even better experience. So, whether you want a gritty, underground affair or a high-end, opulent rendezvous, there are more than enough options to find something that ticks the bill. 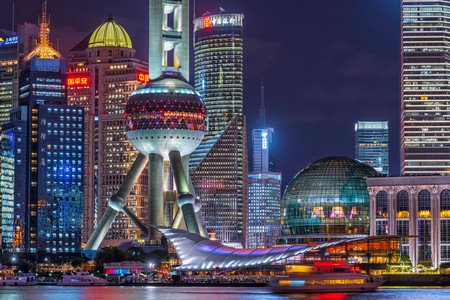 How expensive is nightlife in Shanghai?

The popularity of Shanghai’s look-at-me culture still prevails and it’s one based on aesthetics, connections and the glue that holds it all together: money. While entry fees can be low – sometimes free or often starting from ¥50 (£5) – they can still soar above this. What you really will be paying for is for the prevalent table and bottle service. This is a city where you flash your cash to show off how much better your night is than anyone else’s. This could mean splashing out between ¥800–1000 (£91-113) for a bottle of spirit or getting a table for anything between ¥3,000–5,000 (£341-569) during the weekends. It’s important to remember that this is just one end of the scale and that there are still more lower-spend options available. Culture Trip has included a range of both options below, mostly heading towards the more affordable end of the spectrum.

What are China’s laws surrounding drinking and partying?

There isn’t a minimum drinking age, but alcohol cannot be sold to people under the age of 18. The only thing you may have to consider is that smoking indoors in public spaces is forbidden – although this isn’t always strictly monitored, so it’s best to check what others around you are doing. There isn’t a specific closing time for bars or nightclubs, but in general, they tend to close around 2am, while others keep their doors open until the early hours of the morning. Alcohol is available to buy from supermarkets and convenience stores throughout the day and night.

Chinese drinking culture vastly differs from Western drinking culture. The ins and outs of this can get very detailed, most of which apply to more formal business events. But if you’re with Chinese friends, the main thing to remember is to always say ganbei (cheers!) back to the person toasting and don’t refuse a drink after someone has toasted you, as it is interpreted as rude. But if you’re out for the night, chances are you aren’t planning on saying no anyway.

TOPS at the Banyan Tree 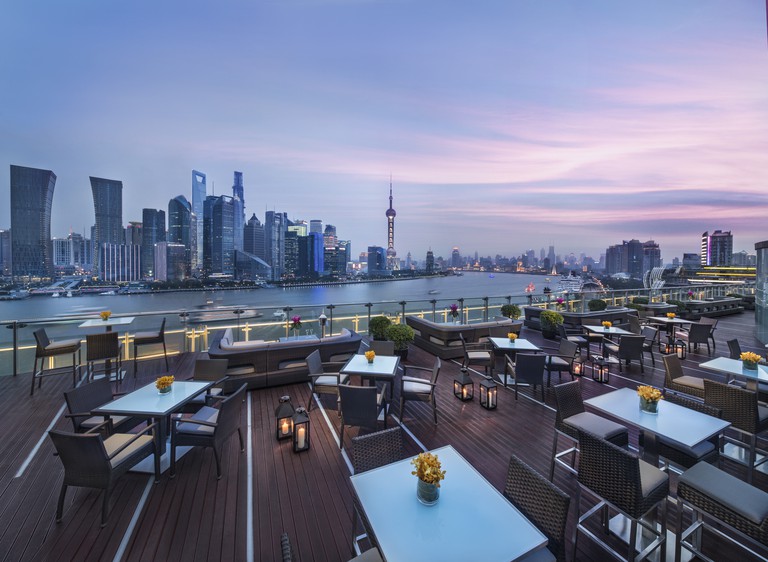 Rooftop bars are aplenty in Shanghai, in no small part thanks to the city’s electrifying skyline. TOPS, on level 13 of the exclusive Banyan Tree Hotel, really does make you feel like you’re on top of the world – or of Shanghai, at least. With sweeping 180-degree views of the Huangpu River, the glamorous stretch of Lujiazui glitters before you as you recline on a lounge sofa listening to chill-out music. The dress code is smart-casual. A glass of wine will cost you around ¥80 (£9), while champagne cocktails go up to ¥150 (£17). They also serve fresh tapas snacks, which make for the perfect accompaniment to a sundowner over the sparkling city.

Complete with pendant lightbulbs, vintage telephones and exposed brickwork, Logan’s Punch’s rustic decor makes the perfect setting to meet new people or catch up with old friends. The bar is owned by Logan Brouse, former bar manager at M1NT club (see below). Tucked away on a road just behind the bustling Nanjing Road West, it’s a cosy spot away from the crowds while being in a great location. It may not be the fanciest or busiest of bars, but that is also what adds to its charm – and with cocktails that pack a litre-worth of punch (literally), you’ll be glad it’s not been discovered by everyone else just yet. 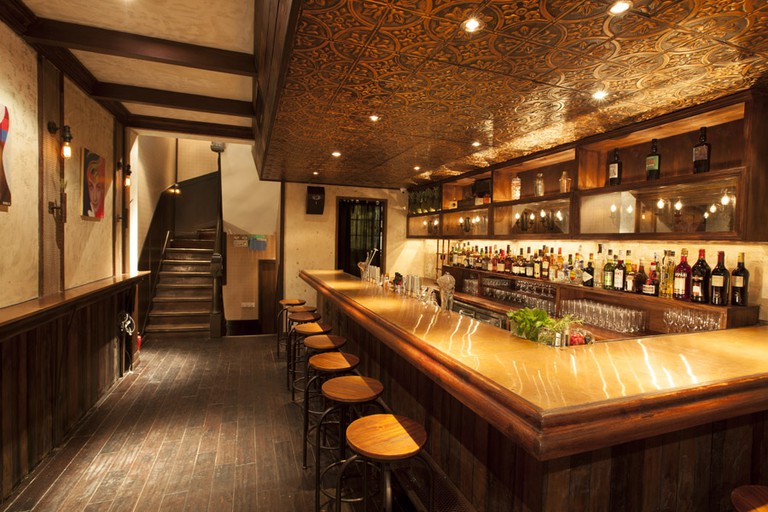 Speak Low, Shanghai | © Speak Low Shanghai
This bar is styled as a Japanese speakeasy, complete with its own secret door hidden behind a bartending equipment shop. Spanning four floors, each has its own theme, and the higher you go the more expensive it becomes: choose the first floor for a party, the fourth for more intimacy. On the lower floors, drinks start at around ¥70 (£8), the third floor from ¥100 (£11) and the fourth floor, often invite-only, even pricier. And speaking of drinks, cocktails range from the classics (negroni sbagliato) and creatives (mixing with Wang Lao Ji tea) to the house-named tipples (the Speak Low includes Bacardi, sherry and matcha). Make sure you reserve a table for the exclusive fourth floor.

Situated on the top two levels of the five-star Hyatt on the Bund hotel, the elegant VUE Bar does exactly what it says on the tin. The spacious rooftop bar on level 33 commands stunning vistas across the Huangpu River, along with a whirlpool bath to relax in and a resident DJ setting a chilled-out ambience. The lower level features another bar and wine racks along the walls. A wide selection of premium drinks and refined champagnes are on the menu – this is a swanky bar to show off at, but that’s what gives it its popularity. 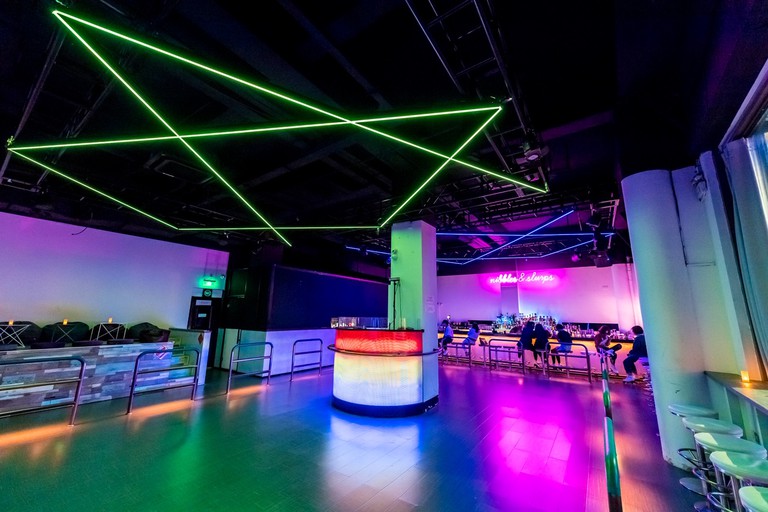 If you’re after a fun evening, a trip to RIINK will not disappoint. The roller-skating rink opened in early 2018, taking over from popular metal bar Inferno, but it looks distinctly different from its counterpart, with pink and blue hues, neon signage and a circular bar at the centre of the rink. Crafted cocktails can be rum-based concoctions, fruity mixes or adapted classics, costing around ¥50–60 (£6-7). Bite-sized snacks, like chicken-wing popsicles (¥68 or £8), add to its status as a fun place to go with friends or on a date. Skates are ¥45 (£5), ¥50 with flashing LED-wheels or four-wheel skates are ¥50 (no time limit).

M1nt is one of Shanghai’s most popular nightclubs, located on the top (24th) floor of a Nanjing Road East skyscraper. The strict door policy is largely based on your appearance, so dress smartly and book ahead to reserve a (pricey) table. The music is pretty generic to suit a varied crowd – expect to hear commercial house, R&B, hip-hop and classic remixes. Tables are dotted around the constantly packed dance floor, and their various event nights – such as “Models Night” – are a telling sign of the aesthetic of this club. It’s all very luxe here and standard drinks are, as you may imagine, upwards of ¥100.

Elevator replaced the popular LUNE bar, and while there has been a small makeover, including a new sound system and appropriately-placed neon lights, not much else has changed. It’s a frequented haunt on the underground scene, with experimental DJs supported by their swathes of patrons in a low-ceilinged setting. DJs are the focus here, giving them a platform to do their thing in the most organic and supportive of environments. Music is mostly house and techno and both local and international DJs are regularly invited to play extended sets. Standard drinks start at ¥45, with cocktails from ¥55 (£6). There’s no set dress code, so don’t fret about looking fancy.

ALL is the place to come to for weekly doses of techno, house, drum and bass, and more. The bar-lounge area is industrial-chic: think low sofas and high stools with a minimal, grey aesthetic. The second room is the rectangular-shaped dance floor, subtly tilted towards the DJ who plays in front of a neon-lit screen. Cocktails range between ¥65–75 (£7-8), and there’s a highball machine you can get involved with, too. Their opening times during the week are pretty standard, but Friday to Sunday could see you partying up until 5am – encouraging you to go big or go home.

Bar, Restaurant, Chinese
Facebook
Email
Twitter
Pinterest
Copy link
Share
Map View
This smaller nightclub is dimly lit with moody red lighting and is the perfect place for a cheap drink among a younger, unpretentious Chinese crowd. Great music is provided by mostly Shanghai-based DJs covering house, EDM, techno and disco. Draft beers (Beer Lao, Vedett, Tiger drafts) are affordably priced around ¥30–40 (£3-4), making it worth coming to for a lively night out. It may be a little pokey, but there’s still enough room to dance and enjoy yourself.

Le Baron screams a cool, boujee vibe, with its red lighting and diamond patterns adorning the walls, tables and floors. This popular club also has branches in Paris, New York, Tokyo and London, telling you all you need to know about how stylish and sometimes exclusive this place can be. It’s free entry, but table reservations come in at the thousands and drinks cost around ¥80–100. Le Baron plays a mix of old-school disco, classics and hip hop, drawing in a crowd of mostly locals and immigrants. If you want something different to a local or underground club, make Le Baron your next visit.