The 11 Best Places For Scuba Diving In Asia 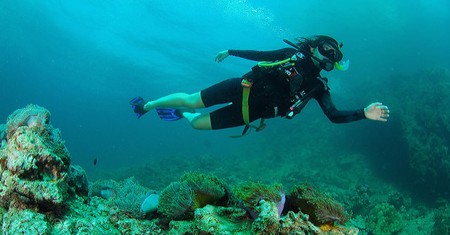 With thousands of tropical islands and waters that hold 75 percent of the entire planet’s coral species, Asia is a diver’s paradise. The continent has countless sites praised by enthusiasts from around the world, which makes finding the best of the best a difficult task. All highlighted by an abundance of diverse marine life, from rare shark species to schools of colorful fish, here is a list of the 11 ultimate best places for scuba diving.

Tioman is a Malaysian island located within the Coral Triangle, which is one of the world’s most biodiverse areas where the Pacific and Indian Oceans meet. Surrounded by numerous coral reefs, Tiger Reef is one of its most impressive highlights for scuba divers coming from around the world. With an underwater pinnacle from ten to 24 meters, Tiger Reef is covered in colorful hard and soft coral, sponges, and reef critters. The spot attracts thousands of fish including snapper, fusiliers, batfish, barracuda, black tip sharks, jack and tuna. The currents at the reef are strong and you can occasionally also spot nurse shark, eagle ray and whale shark.

Natural Feature
Facebook
Email
Twitter
Pinterest
Copy link
Share
Map View
Located in between Phuket and the west coast of the mainland, Thailand’s Phi Phi Islands are home to two of the country’s most colorful and densely populated dive sites named Koh Bida Nok and Koh Bida Nai. The sites are both protected by the Phi Phi Islands national marine park and home to coral-covered walls, beautiful coral gardens and an abundance of sea creatures. With shallow parts, the locations are also good for snorkelers to get up close with marine life. You are likely to see black tip sharks, eel, turtles, octopus, bearded scorpionfish, lion fish, and schools of snappers. You can also spot leopard sharks, banded sea snakes, squid, pipefish and seahorses.
Open In Google Maps
Krabi, Thailand
Give us feedback

A couple more of Thailand’s finest dive sites, namely Shark Point and Richelieu Rock, are located near the island of Phuket in the Andaman Sea. Richelieu Rock is a horseshoe-shaped pinnacle northwest of the island with soft corals, anemones, barrel sponges and sea fans. Smaller creatures like harlequin shrimp and ghost pipefish live in the cracks of the rock. On the outside, you can spot schools of snapper, barracuda, manta rays, and even passing whale sharks. Like its name suggests, Shark Point is a more extreme dive spot. Below the spear of rock, which is seen above the water, lies a reef with both hard and soft corals. You’ll see leopard shark and reef shark, as well as an abundance of tropical fish, like morays, snapper, scorpion fish, cuttle fish, and squid.

This handsome fellow is a Pharoah cuttlefish, one of the amazing finds @c_delacy captured for our cover story on the coral world of the Andaman Sea, off Thailand. More at nytimes.com/travel. #andamansea #richelieurock #diving #fish #thailand #travel

Some of India’s most beautiful dive sites are located in the Bay of Bengal, right off the coast of the city of Pondicherry. One of the most interesting sites is Temple Reef, which is an artificial reef, consisting of fully recycled materials such as concrete, rocks, trees, palms, and iron bars. It has over 100 species living on it, including giant groupers and yellow frog fish. For lovers of drift diving, Aravind’s Wall in Pondicherry is an exciting site with a diverse range of coral, lion fish, grouper, kingfish, eels, parrot fish, sea snakes and triggerfish. If you’re lucky, you might even catch a glimpse of sharks, whale sharks, mantas, turtles and dolphins.

Koh Tang is an inhabited island located in the Gulf of Thailand, about four to five hours off the coast of the Cambodian town of Sihanoukville. The area has several sites, including Explosion Reef, Three Bears and Sting Ray Alley. The first has an abundance of staghorn coral with schools of colorful juvenile fish, groupers, rays, triggerfish and other tropical critters. Three Bears is a formation of caves with a reef of bright corals, where you can spot batfish, jacks and barracuda. Lastly, Sting Ray Alley is a rocky site full of stingrays, octopus, scorpion fish, cuttlefish and crustaceans.

Komodo is an Indonesian island known as the habitat of the Komodo Dragon, which is the largest living lizard on earth. In addition, the island is popular among scuba divers and it is home to over 50 sites, all of which provide an excellent dive with manta rays, eagle rays, sharks, dolphins, eels, turtles and the rare blue ringed octopus. Komodo also has an abundance of coral life with a rainbow of colors. One of the most popular sites is Cannibal Rock, located just south of Komodo national Park. The dive site has soft corals with a range of strange invertebrates, including frog fish, octopus, pygmy seahorse, and scorpion fish.

Also located in Indonesia, Raja Ampat is an archipelago comprising over 1,500 small isles. The islands are among the most unique locations and have the world’s highest recorded species of fish and coral – including over 537 different kinds of coral and 1,074 recorded species of fish. Cathedral Rock, located on the archipelago’s Boo Island, is one of the premium sites. It is made up of two windows in limestone rock, which have been carved out over time by strong currents. Through the windows you’ll find a breathtakingly rich reef, with hard and soft corals growing on top of each. Blue-flash fusiliers, batfish, yellow snapper and unicorn fish are some of the species you’ll be bound to spot around the reef.

Moving on to diving spots in the Philippines, Monad Shoal is a dive site near the island of Malapascua. It’s known as one of the few places in the world where you can see the thresher shark, which makes it one of the best places for scuba diving in Asia. The site is an underwater island at 16-32 meters deep with over 200 meter drops at the sides. The sharks hunt in the deep waters, but can be spotted in the early mornings at the Monad Shoal, which they use as a cleaning station. Other marine life that can be spotted here are giant manta rays, devil rays, eagle rays, batfish, flutemouths, barracuda, tuna, pipefish, unicornfish, squid, octopus and various moray eels. Occasionally, other species of shark will be seen such as hammerheads and whitetips.

This morning we got really close and personal with this beautiful Thresher Shark. Such an amazing experience!!🐋🐟🐠 #threshershark #malapascua

The Tubbataha Reef National Park is situated in the middle of Sulu Sea with 374 species of corals, 600 fish species, 11 shark species, and 13 dolphin and whale species. The reefs are located on the Cagayan Ridge, which is composed of extinct underwater volcanoes, and the site is only accessible for a few months each year. White tip reef sharks are common sights, as are manta rays, schools of jacks, tuna, barracuda, and whale sharks. The reefs also serve as a nesting ground for hawksbill and green sea turtles, which you’ll also run into. As one of Asia’s best dive spots, UNESCO declared the Tubbataha Reefs National Park a World Heritage Site in 1993 and the reef was nominated at the New 7 Wonders of Nature in 2008.

Nah Trang is a coastal Vietnamese city known for its beaches and scuba diving, and considered one of the world’s most beautiful bays. Madonna Rock and Moray Beach are two of the location’s best sites, which both have an abundance of colorful corals and marine life. With several caverns at an average depth of 25 meters, Madonna Rock’s marine life includes morays, lion fish, scorpion fish and a wide array of coral. The site at Moray Beach is about 18 meters deep and its highlight is the Moray Cave, where you can spot pipe fish, clown fish, black frog fish, razor fish and devil scorpion fish.

Ari Atoll is a natural atoll located in the Maldives surrounded by the Indian Ocean. There are 105 small islands in the atoll, and the scuba diving sites here are considered by many to be the best in the Maldives. Broken Rocks is one of the most popular locations, which is comprised of a canyon that splits the dive site in two, highlighted by a coral hallway filled with sea fans, turtles, scorpion fish, and napoleon wrasse. Ranhali Madivaru, one of Ari Atoll’s other popular sites, is known as the place to see mantra rays. A third popular site, Maya Thila, is part of a marine reserve and the location is a layered pinnacle that starts at only six meters.

A photo posted by Bhushan Bagadia (@bhushanbagadiapositives) on Mar 5, 2016 at 1:15am PST