Buddhism is a faith followed by one of every 10 people across the globe. With so many different schools and traditions spread across Asia, the birthday of its spiritual founder—Prince Siddhartha Gautama, aka the Buddha—is a great opportunity to experience its full richness and beauty.

The official date for Buddha’s birthday (usually called Vesak) varies as it is based on the Buddhist lunar calendar. It’s celebrated on the full moon, which tends to fall either at the end of April or in the beginning of May. This year’s Vesak will be marked on May 10, 2017, but there are exceptions: Indonesia will hold it on May 11, while Japan and Taiwan (the only countries to have fixed Gregorian dates for Vesak) always hold it on April 8 and on the second Sunday of May, respectively.

On Vesak, Buddhists across the globe commemorate the birth, enlightenment and bodily death of Gautama Buddha by assembling at their local temple, singing hymns, and making offerings to monks. Animals are often set free, or statues of Buddha are covered with flowers and water, but as the religion spread throughout Asia, it was influenced by local customs, creating a wide array of practices and festivities. 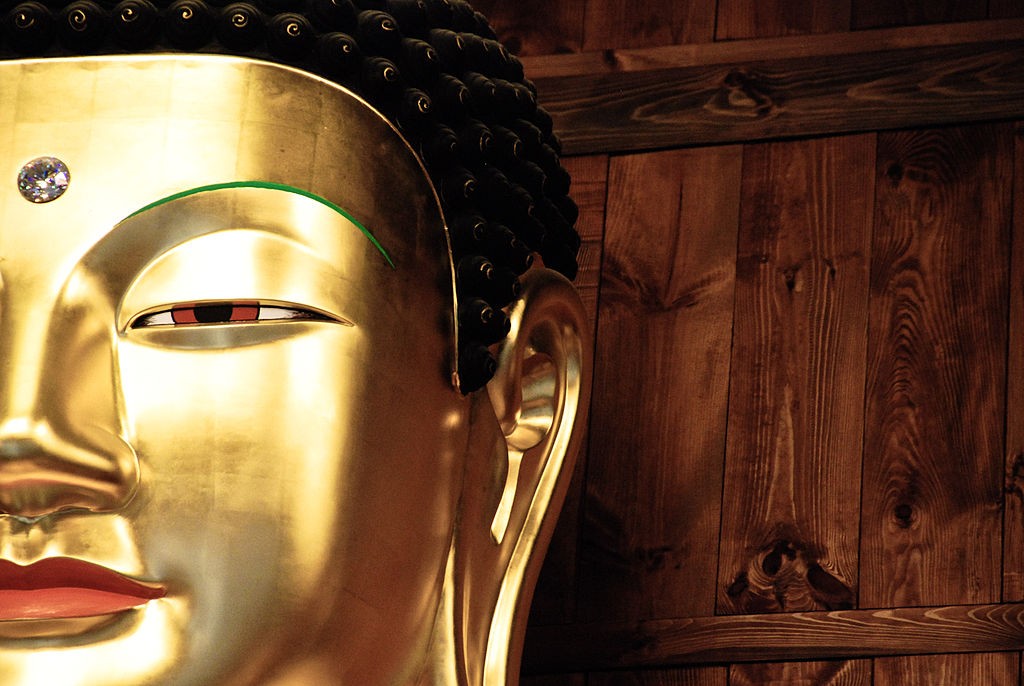 Though officially a secular communist republic, China is home the largest population of Mahayana Buddhists with over 244 million adherents; it is even an official holiday in Hong Kong and Taiwan. The fódàn, as Buddha’s birthday is locally called, is held in Buddhist temples by making offerings to monks and lighting incenses. In China, the holiday focuses mainly on the ceremony of Yùfójié, or the Bathing the Buddha.

The bathing ceremony is common across Asia and involves pouring scented blessed water over a statue of the infant Buddha, whose right forefinger is pointed upwards towards the heavens and left forefinger downwards towards the earth in  reference to the prince’s birth. According to legend, shortly after springing out of his mother’s womb, the Buddha said, “Above heaven and below heaven, none are equal to me. This is my last birth. There will be no more rebirths,” and the heavens responded by showering him with water and serpents (represented in China as dragons). 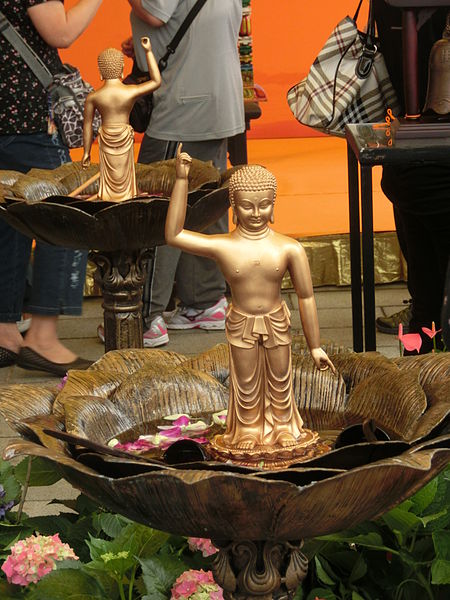 In Japan, home to a predominantly Buddhist population of around 84 million, many of the holiday’s local traditions revolve around flowers, namely the lotus flower, which sprang from where the infant Buddha walked, according to legend. In temples, adherents are also invited to “bathe the Buddha,” and he is sprinkled with ama-cha, a form of sweet tea made with a variety of hydrangea leaves, and lotuses are hung around his neck.

The chief event is the Kanbutsu-e or Hana-matsuri (Flower Festival), officially held on April 8 to coincide with the blooming of the cherry blossom, though some traditionalists mark it according to the Buddhist calendar. 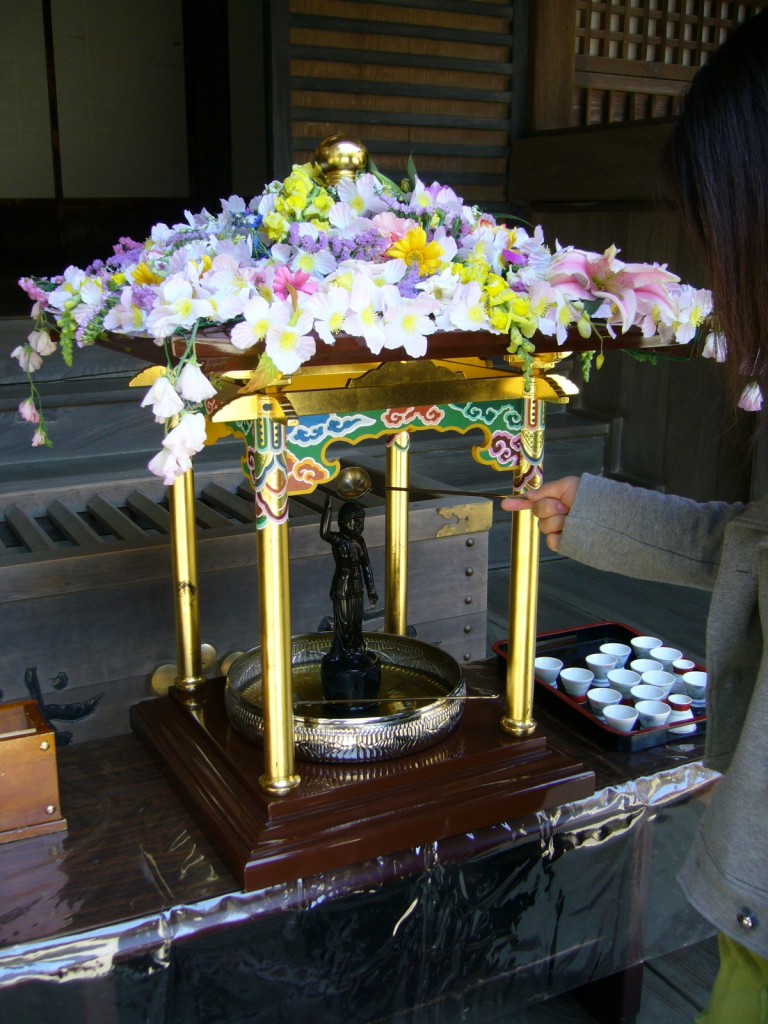 In Thailand, Buddha’s birthday—called Visakha Puja—is an official public holiday. People gather at their temples to hear speeches by monks and are expected to chant prayers and donate or offer food, flowers, and candles, which are meant to symbolize the finite nature of material life. 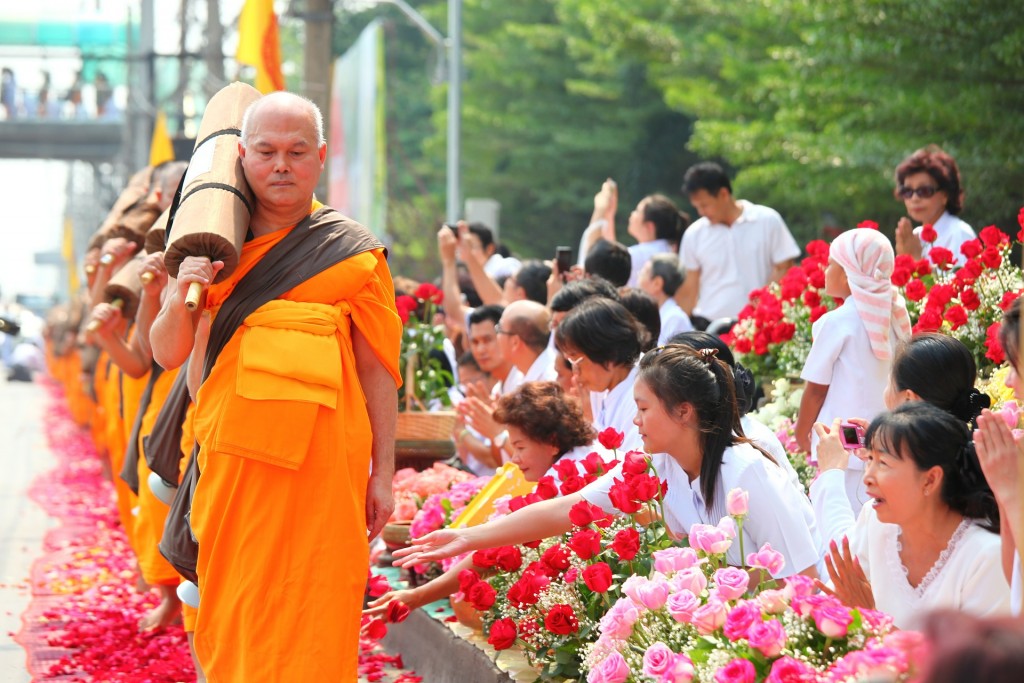 In Vietnam, the holiday is called Le Phat Dan and is marked with parades and lanterns in the streets. Pagodas and temples are decorated to invite followers to make offerings to monks and hear their sermons.

In Sri Lanka, Vesak is an official public holiday that spans two days around May’s first full moon, during which time all liquor shops slaughterhouses are closed to ensure no death takes place during the celebrations. Temples hold celebrations as locals decorate their houses and the streets are filled with candles and lanterns. Dansalas—free buffets for monks and the underprivileged—are opened and pandols—decorative gateways symbolizing enlightenment—are erected, with different parts of Buddha’s story depicted throughout the country. 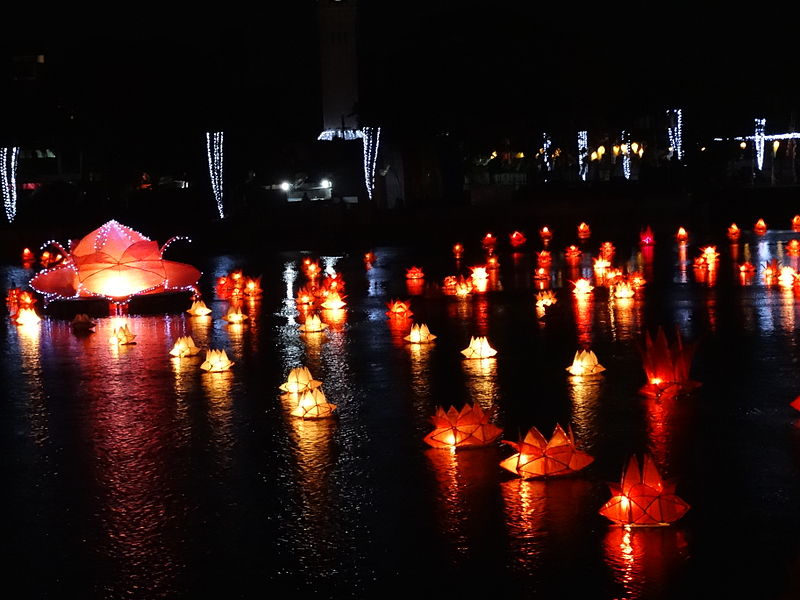 In Cambodia, Buddha’s Birthday is called Visak Bochea and is also a public holiday. As is common in Theravada Buddhism, the Buddhist flag is raised above temples and paraded in the streets by monks. Monks also hold parades carrying lotus flowers, candles, and incense, with people usually offering monks alms.

In Indonesia, the Waisak, as Buddha’s birthday is known, is an official holiday involving a large procession between ancient Buddhist temples,  beginning in the Mendut Temple in Java and ending in the world’s largest Buddhist temple in Borobudur. 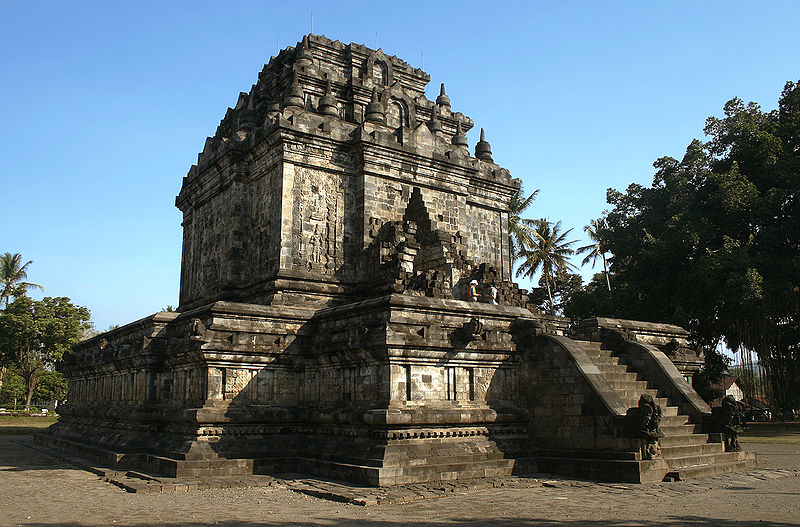 Home to about nine million Buddhists spread across the massive subcontinent, the holiday is known as Buddha Purnima or Buddha Jayanthi and is a diverse affair that reflecting local traditions, with Dharamsala serving as the epicenter of Tibetan Buddhism.

Like in many places, Indian Buddhists will usually dress in white and head to temples and monasteries to hear sutras, or sermons, and observe a vegetarian-only diet featuring kheer, a type of sweet rice pudding eaten to symbolize an offering of free porridge given to a young fasting Buddha. 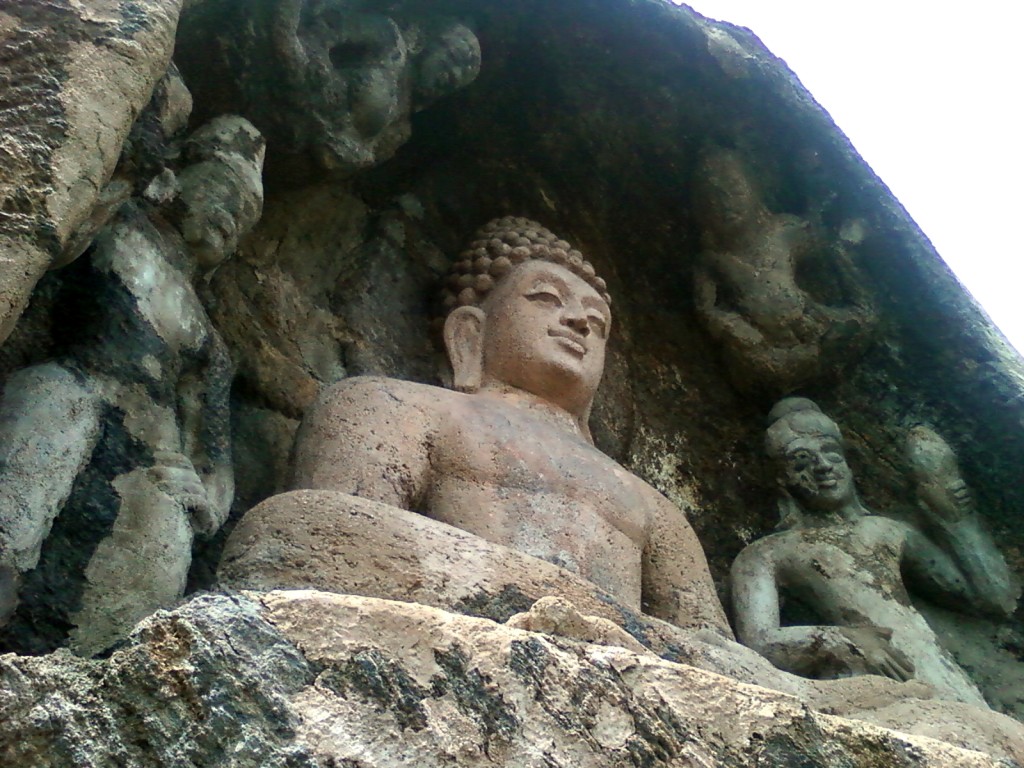 Also called Vesak in Singapore, Buddha’s birthday is celebrated by decorating temples with Buddhist flags and lotus flowers and making offerings. The tradition of letting birds and animals go free, to symbolize the act of liberation, was banned in many countries after experts claimed the animals failed to survive outside captivity. (The custom is still in practice in Malaysia.)

In Nepal, where Buddha was born, the holiday is marked with much fanfare, and members of the Newar people of the Kathmandu Valley, which claim to trace their lineage to the prince’s clan, hold it in the highest regard.

As in India, the holiday is marked with the eating of sweet rice pudding and people, usually women, going to temples dressed in white. 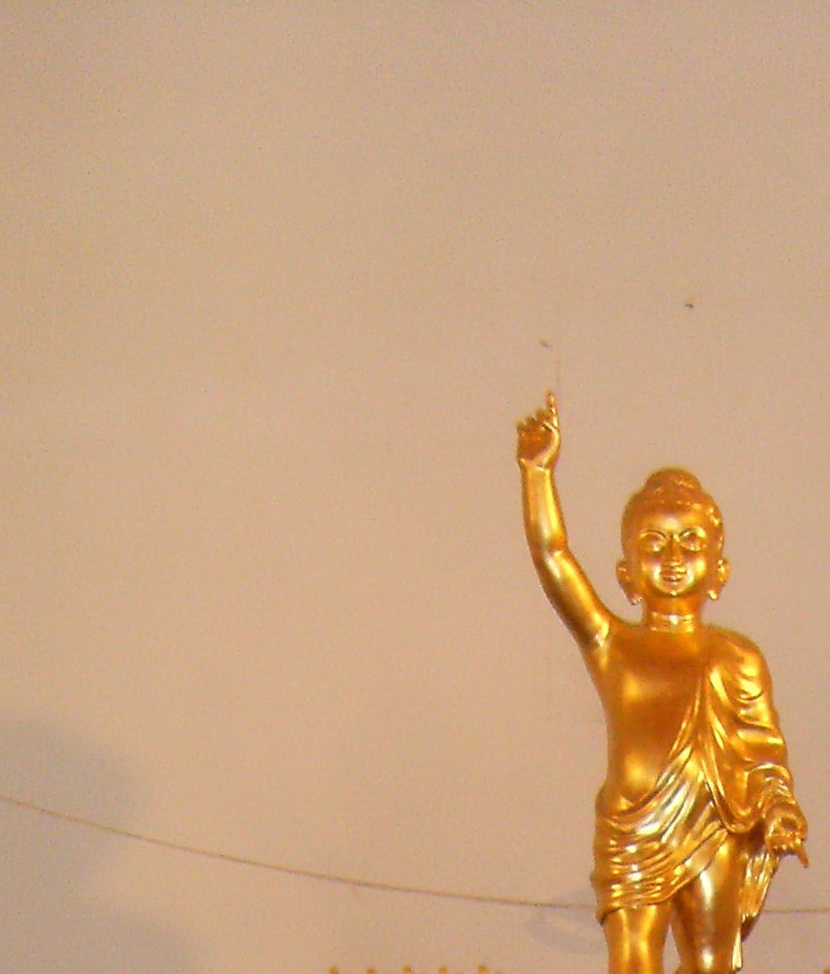 A statue of an infant Buddha in Lumbiniwan, Nepal | © Tevaprapas / Wikimedia Commons