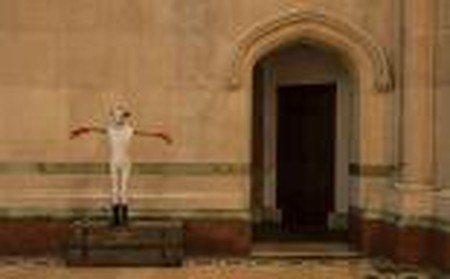 An appreciation of the art of Jane Alexander, who persistently interrogates her native South Africa’s history and politics in her work, and her installation in the Cathedral of St. John the Divine in New York, from Contemporary And’s M. Neelika Jayawardane.

‘An insurgent whose heart and mind no empire can win’

When I heard that Jane Alexander’s work would be shown in the Cathedral of St. John the Divine in Manhattan’s Morningside Heights neighbourhood, I wondered how the work I always associated with South Africa would translate here, in Manhattan. The invitation to the opening of the show, Surveys (from the Cape of Good Hope) organised by the Museum for African Art in Manhattan, in collaboration with the Cathedral of St. John the Divine, promised the first major North American survey of tableaux, sculptures, and photomontages by Alexander. The image on the invitation is itself a montage: Alexander’s amputated human-animal figures posed among rusting sickles and blood-red rubber gloves, all positioned in front of a triptych depicting the ascension of Jesus. Haloed kings, apostles, sinners, and angels surround the King of Kings who looks on at the scene with kindly benevolence. The ornate gold frame made me think of the Baroque period’s penchant for hiding violence under gilded beauty.

Before I stepped into the church, I sat outside, in the adjacent blooming gardens. The towering cathedral walls, the cornerstone to which was laid in 1892, mirror the longings of the first great waves of European immigrants to the city; 1892 was the year that Ellis Island – the conduit to the hungry and the penniless of Europe – opened. I think about what it means for a church such as St. John the Divine to carve out spaces in which we can remember the body in pain: to invite the liturgies of other faiths, to share the pulpit with the Other, to invite in difficult cargos of memory. This is not a church that aims to use its monumental structure or its gilded beauty for forgetting. St. John’s asks: what does it mean for us to bear witness, as a congregation? What does it mean for a place of worship to invite us to engage in ‘personal communion’ with art that takes as risky journeys as does Alexander’s, to ask us to listen to the ‘still, small, voice within’ during such perilous communions? The exhibition’s curator, Pep Subirós, maintains that although Alexander’s decisions were ‘in frequent dialogue’ with him, ‘and this dialogue sometimes modified her initial ideas,’ the final decisions concerning the location and arrangement of the different artworks were Alexander’s – ‘not because she imposed’ her ideas, ‘but because the spatial context and its multiple symbolic elements inevitably play an important part in the final configuration, and it was part of the art project to decide the forms and the limits of this relation. These are decision for which the artist, ultimately, has to take responsibility.’ In fact, Subirós understands the ‘curator’s role in a solo show of a living artist’ to be more ‘that of a ‘midwife’ assisting the artist’s efforts for the best possible delivery of her or his work,’ rather than that of a director.

In Morningside Heights, Alexander’s work feels less suggestive of South Africa’s story, and more evocative of the last five centuries here: of the genocide necessary for the myth of America, for creating the empty spaces of deciduous forest and marshland in which immigrants subsequently made their home. If you pay attention, you will see that Alexander and Subirós used elements specific to each chapel to interact with the stage-play world within each of the Chapels of the Seven Tongues. In the St. Boniface Chapel, on an elevated red velvet carpet laid out for an arriving army, wild dog-men, arranged before the Cathedral’s monumental sculpture of St. Michael. They are three rows wide and nine deep, the slim, muscular bodies marching forward on black-booted feet, dog-faces turned in unison to the right. This army’s uniform dedication is to that rightward gaze, focus firmly set on the duty to which its members assigned their bodies, to those orders controlling their actions. They remind me of the beauty inherent in Soviet-era display parades, and of the impossibility of countering the might of such power. But in front of them, a minuscule dog figure: standing on all fours, feet planted in a pose that is both steady and ready for motion, gaze fixed clearly on its goal. This un-photogenic creature, unmighty as any defiant rabble-rouser, contains, in its taut, small body, the possibility of disruption. This figure, which can be so easily dismissed by the uniform rows of well-funded, well-trained armies, is the insurgent whose heart and mind no empire can win. One wonders if St. Michael will guide this cur to victory, or if the avenging warrior-angel is on the side of more conventional power.

The Chapel of St. Saviour contains a familiar booted figure from a show I saw in Cape Town in 2010, with the sound of World Cup vuvuzelas trumpeting in my ear. This is a bleached white Jesus figure, posed eternally atop the munitions box: arms outstretched, crucified. But this Jesus, replete with a decorative crown of thorns, has neither arms nor hands – lifeless industrial-strength red gloves substitute for those appendages, hanging useless at the end of broomstick arms. Though he has come to save, to atone for sins, this Jesus’ hands are red-rubber clean, and red-rubber lifeless. Opposite, separated by a double row of chairs and a luminous clerestory window of stained glass, an illuminated bridal figure. Layer upon layer of translucent, ivory silk and white chiffon shroud the face, head, and body of the veiled wearer. The bridal train cascades to the floor of the chapel, pooling on the tile. This, the bride of Christ – the congregational body – is hung high on the chapel wall, far away from the unfocused gaze of our armless Christ-figure. The St. Columba Chapel contains ‘African Adventure’. The most noticeable feature here is the light: the Bushmanland earth on which the figures are posed sprays the room in a blood-wash, and its rust permeates the sepulchral shadows. In the background, moving away from a scene busy with small figures, a full-sized man, his face covered by a white hood. Although his back greets visitors who enter the chapel, he is immediately visible among the montage of more diminutive figures because of his size, and because his body drags sickles, machetes, and toy tractors. All of these ‘found objects’ are tied to his waist by taut cables. This man’s job, it seems, is that of the scapegoat – to drag away evidence of yesteryear’s sins. One gets the feeling that even if the violence that this place has seen has now been ceremonially sent away, its shadow still permeates. In the foreground of the scene, Alexander’s Bom Boys appear in the costumery of shady businessmen – one sporting a gangster’s dark glasses. Several command a presence on top of the same munitions boxes as the Christ-figure in the Chapel of St. Saviour. An imperially thin colonial ape-man, brilliant in the whites his people are known to use to separate themselves from the blood of their endeavours, surveys the scene from a rusted wheelchair; another ape-man – unclothed, this time – drives about in a paint-stripped car, while a lone, wingless ibis gawks about. A lonely-looking figure is dressed in feminine costuming: she is of delicate build, her features veiled by a fox-like mask. She sits primly in her white wedding gown: a colonial bride, brought here to do her duty.

I worry that the red earth will sully the hem of that dress. Surveying this entire world-gone-mad is an ape-man, belly rounded from middle age, from atop a crimson oil drum: his arms are slightly outstretched, his shoulders slumped a little in resignation, his head inclined in the angle of bewilderment. It is as if he is asking what all this earthly suffering is for. The North Transept of the church was gutted by a fire in 2001; there is no roof overhead, and the walls are marked by the damage inflicted by the fire; some forgotten garden tools – a rake, a spade, a rickety wooden ladder – are propped up in a corner. One feels vulnerable to the open air, and falsely protected by the remaining grey stone walls. In the open space of what used to be a chapel floor, Alexander’s “Security”. Here, Alexander and Subirós have constructed an extraordinary montage: a double row of high chain-link fence topped with neat rolls of barbed wire, and scavenging bird-figures. In between the two rows of fencing, a foot-wide walkway scattered with sickles and machetes. These instruments are used to sustain life – tools commonly used for farming in regions without large machinery. That they can also eviscerate and erase entire populations of neighbours is not far from our minds. Scattered between these instruments, industrial-strength rubber gloves – the kind used for working with corrosive chemicals. Dirty from the rust bleeding out from the sickles and machetes, they are reminiscent of butcher’s gloves: it is as if blood has stained an impervious material meant to resist and protect one from damage. Within the rectangle enclosed by the fence, an immaculate, brilliant green lawn, peopled by a lone, wingless vulture-figure: a stalking sentinel who cannot leave this protective enclosure. What Alexander has planted is not grass, but spring wheat.

Evelyn Owen from the Museum for African Art in Manhattan tells me that the germination process, which involved soaking and leaving the seeds to rest, actually took three days before they were sown on this black rectangle of soil. Now, that black rectangle, which had a millimetre of sprouting green on the day of the opening, is a carpet of luminescent springtime, attracting a scavenging city pigeon and a red-beaked common finch. The Security Vulture has not frightened them away. They are busy pecking at the stalks of green, plucking out entire clumps with black earth still attached to shallow roots. Surveying this scene – one that encloses in safety and entraps – a watchful baboon-masked figure, its perfectly formed human fingers curled next to its foot, ensconced on a high ledge. Its gaze is fixed on far-away places. It takes a lot of fearlessness to ‘be’ with Alexander’s work. The first time I encountered her sculptures, I felt I had to stand with them in truth, with compassion – with the realisation that I will probably never understand that suffering, but that the stain of it is something I live under (and together) with. This is not ‘easy’ work; these are not ‘pretty’ sculptures – though they are obviously so beautifully made. But each time I’ve seen her work, I walk away having experienced something close to transfiguration – as if what I consumed has entered my body, changing the very way Ibe in this world. If you engage with Alexander’s work, you must walk in and walk away with how your narratives intertwined with what you felt as you encountered Alexander’s work. Go there to engage with risk. Be real in the space of the sacred. For Americans who walk into this church, for people from this historic neighbourhood – where the initial boatloads from the tail end of the nineteenth century gave way to dozens more – perhaps it is our trans-generational inheritance, of the memory of displacement and suffering, that enables us to engage with Alexander – full of fear, yes, for what her work will surface, but grateful for communion with that small, hidden voice of history that helps us face our present with courage and conviction.

Associate Professor of English at SUNY-Oswego.

Originally Published in Contemporary And: A Platform For International Art from African Perspectives.