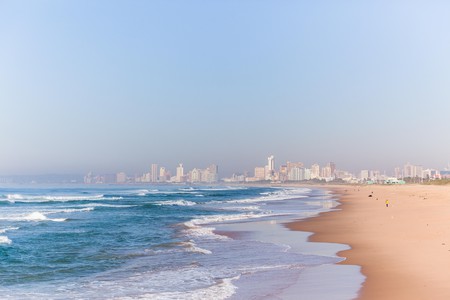 When Durban’s ageing promenade was revamped in 2010 for the Football World Cup, it left a legacy that lasted long after the cheers faded at Moses Mabhida Stadium and the fanparks it linked together, attracting families, walkers, joggers cyclists and skaters by the score.

“Our focus was largely to remove old structures to clear the site lines along the beachfront and make it safe and inviting,” says Brandon Robertson, now a partner at Bloc Architects, who handled the 2010 promenade project. “We also created several commercial modes.” 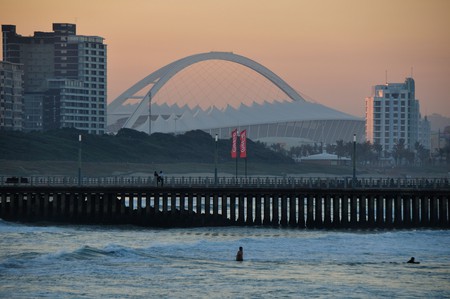 The promenade was revamped ahead of the 2010 World Cup and is close to the Moses Mabhida Stadium, where some of the games were played | © Chris Bloom / Alamy Stock Photo

Today the promenade is home to some of the city’s best-love eateries, from the trendy Circus-Circus restaurant, with its grass roof and option to order from loungers on the sand, and the sophisticated California Dreaming, which overlooks the shimmering waters of the rebuilt Rachel Finlayson Pools, to the Surf Riders Food Shack, which draws surfers with its laid-back vibe and foodies with its fabulous fare (the wood-fired chorizo-and-prawn pizza is legendary in the area).

Inspiration for the swirling, curving design of the promenade was taken from the waves washing beside it, with the inevitable nod, Robertson concedes, to Roberto Burle Marx’s iconic 1971 design for Copacabana Beach in Rio. In the years since the World Cup, the promenade has been extended, first to the north, linking with the sheltered waters of Blue Lagoon or ‘Lugs’ – traditionally the BBQ (known as a braai if you’re South African) and picnic hub of the city’s Indian community – and, since November 2019, to the south, snaking past uShaka Marine World to the mouth of busy Durban Harbour in what’s known as the Point area. This newest extension was undertaken by Cox Architects from Sydney, Australia, and Iyer Urban Design Studio in Durban, for the Durban Point Development Company. 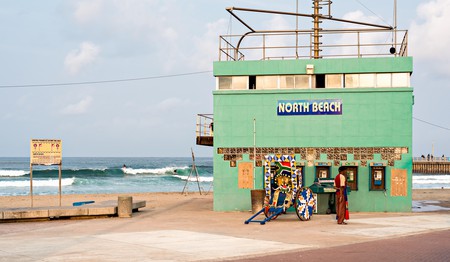 North Beach is popular with surfers and locals, and has a very laid-back vibe | © Timothy Hodgkinson / Alamy Stock Photo

The beach at the Point is one of the safest and most popular in Durban, says Glanville Jacques, director of architecture at Iyer. “Sheltered by Vetch’s Pier, it’s the only beach offering a calm, warm, all-day swimming area for all ages.” As part of the promenade project, the design team created new facilities for the Point Water Sports Club and seine netters already based there, which have been integrated into a lower level beneath the promenade, along with public toilets, parking and operational facilities for lifeguards, first-aiders and cleaners.

The upper level walkway is accessed by a series of ramps and stairs, forming an amphitheatre for public events and entertainment, and meandering to the harbour mouth, with concrete seating areas clustered around elegant lighting and planting boxes of shrubs and young trees.

The form and design of the new promenade take clues from the natural setting in a design interpretation of the coastline melded with patterns from the original dune vegetation, says Jacques. It’s an investment with an eye firmly on the future, whatever that brings: the design can be adapted to accommodate a sea-level rise over the life of the structure, by raising the height of the vegetated dune buffer on its seaward side. 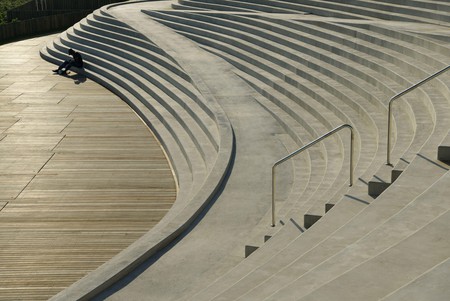 Part of the walkway is accessed by a series of ramps and stairs, forming an amphitheatre for public events and entertainment | © Frank Kahts Creative / Alamy Stock Photo

Grab a bike and enjoy the ride, or for the more adventurous, hire a go-kart

And there’s plenty to look forward to tourism-wise in the Point through which it runs, with a ‘Durban Eye’ Ferris wheel, hotel and mall next to uShaka Marine World in the planning, and a new £10 million Durban Cruise Terminal in the harbour.

To negotiate the promenade you can hire bikes, quad bikes, go-karts and skates anywhere along its length, from The Bike and Bean (between Blue Lagoon and Suncoast), to The Skate Store (at North Beach), Xpression on the Beach (near uShaka Marine World) and Ocean Ventures (at uShaka). Some of these also hire out bodyboards, surfboards, umbrellas, beach chairs and lockers. Segways are also available by the hour from Moses Mabhida Stadium. 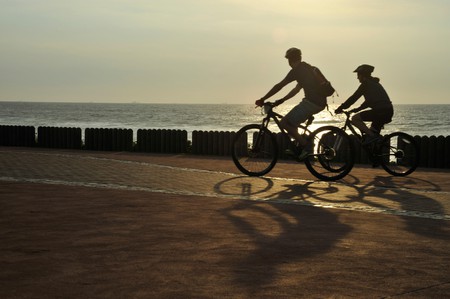 The best way to negotiate the promenade is by hiring a bike, or even a go-kart | © Frank Kahts Durban / Alamy Stock Photo
Give us feedback