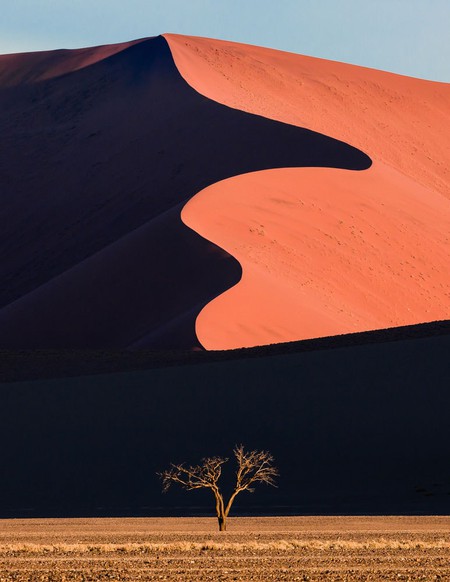 The African continent is filled with the weirdest and most wonderful countries, and as such offers tourist experiences unmatched anywhere else on the planet. Here’s our list of 18 crazy things to do in Africa before you’re 30.

Experience an Authentic Cultural Interaction With the Maasai in Kenya

The Maasai people share a history filled with tales of courageous warriors and today many of them live as nomadic cattle herders. Visitors to Kenya can go on a walking safari with a Maasai guide or book a cultural excursion where you’ll visit Maasai villages and homes. 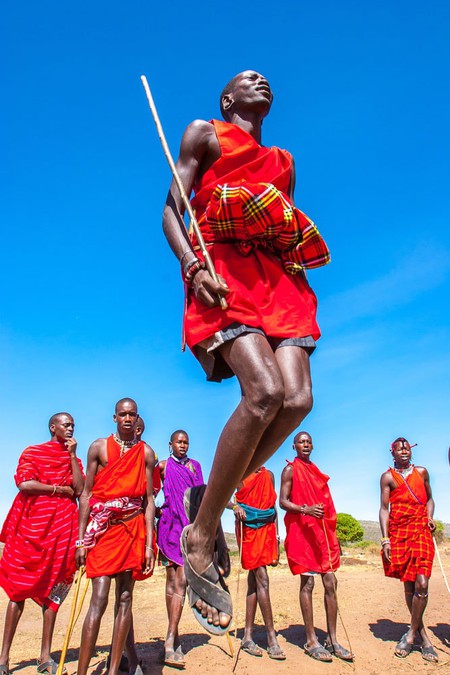 Take a Dip in the “Devil’s Pool,” Victoria Falls

Swimming in the “Devil’s pool,” situated in the world’s largest waterfall, has to top the list for adrenaline junkies visiting Africa. The natural pool is formed by a protruding rock lip which ensures visitors don’t topple over the edge. There’s definitely an element of danger but, at the same time, it’s one of the most amazing experiences you’ll ever have. 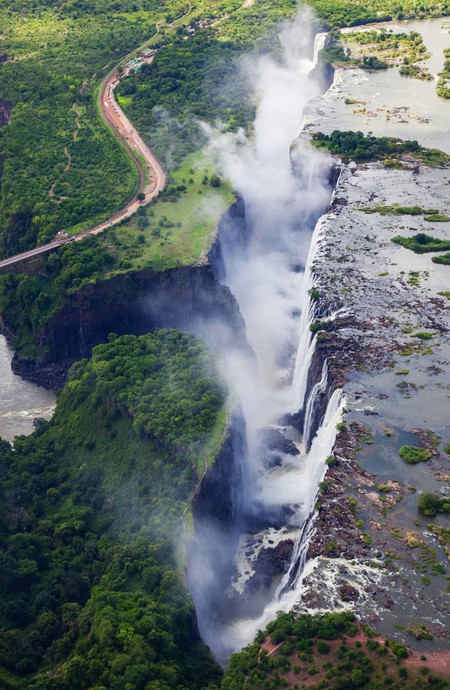 These majestic animals, with their human-like characteristics and behavior, are something to be seen. Bwindi Forest National Park in Uganda is home to four families of gorillas, making up over 300 individuals, and experts will guide visitors through the rainforest in search of them. Gorilla numbers have been decreasing for years but funds from these tours aid in their conservation. 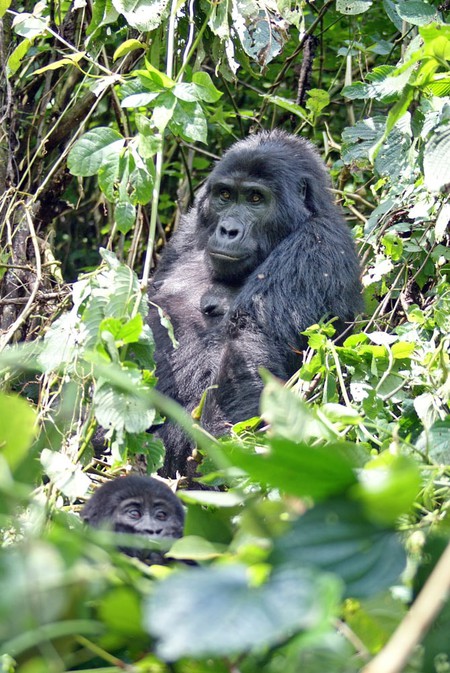 Sandboard on Some of the World’s Tallest Dunes in Namibia

Namibia boasts some of the tallest sand dunes on the planet, an­d sandboarding down them is possibly the most fun you can have in a desert. First timers are welcome and the action is very similar to snowboarding. Tours can be booked through Desert Explorers, and they last approximately three hours an­d include a light lunch as well as transport.

Dune 7 in Walvis Bay, Namibia, has been dubbed the tallest in the world | © Agota Kadar / Shutterstock

Walk With the San People in the Kalahari Desert

The San people occupied the Kalahari Desert long before anyone else and still live a nomadic, hunter-gatherer lifestyle not influenced by Western civilization. A walk through the bush with them will open your eyes (and ears) to the African bushveld. From spotting birds and animal tracks to setting traps and hunting for food, their knowledge of the wild is extraordinary. 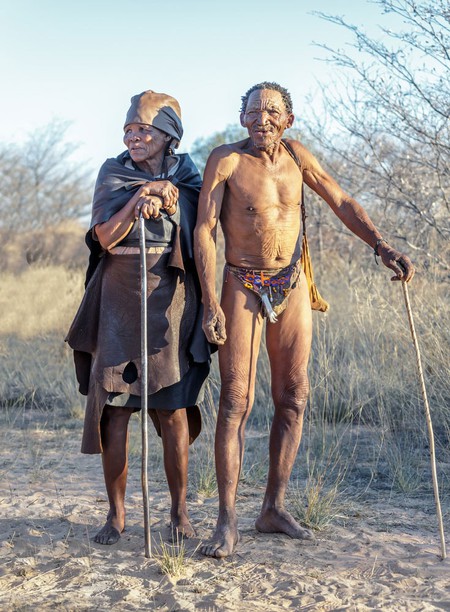 The San’s native language, Taa, is one of the most difficult in the world | © Vadim Petrakov / Shutterstock

Mount Kilimanjaro towers over Tanzania and its peak can be seen from Kenya. It is, after all the highest mountain in Africa. It’s the ultimate achievement for adrenaline seekers but you can’t show up unprepared—adequate training and research is of paramount importance. 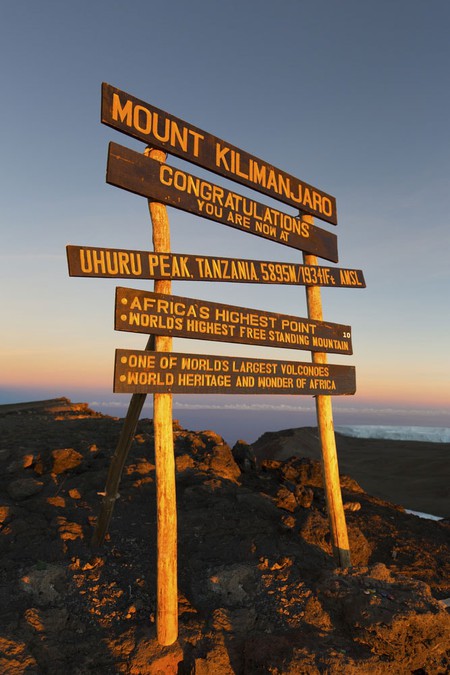 River Raft Down the Zambezi, Zambia

Whether you spend a day or four on the trip, rafting down the Zambezi promises to be as exciting as it sounds. During the day visitors will experience the best rapids the river has to offer while overnight visitors spend evenings relaxing next to the campfire and star gazing. Zambezi Rafting has been in business for over 20 years and they have a range of tours and trips to choose from. 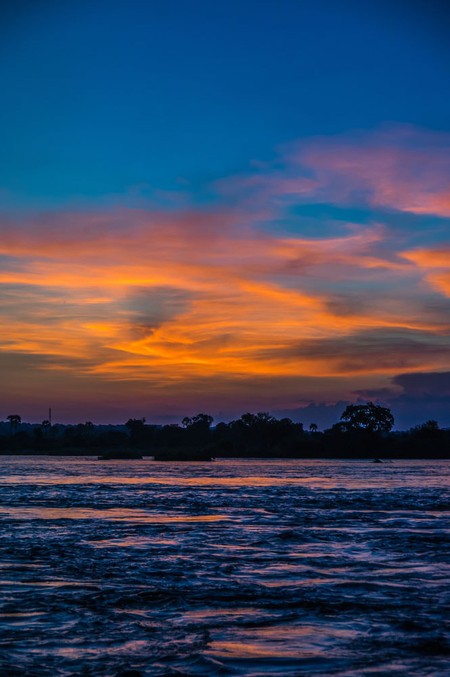 From safaris, helicopter rides, and zip lining, there’s much to do in Zambia | © Sean Heatley / Shutterstock

Swim With Whale Sharks in Mozambique

Tofo in Mozambique is one of the best spots to find whale sharks. These massive fish grow between 4.5 and six meters (15-20 feet) in length and are herbivores; they are, however, considered sharks and not whales. Diving with these giants feels otherworldly and is sure to top the list of your most memorable travel experiences. 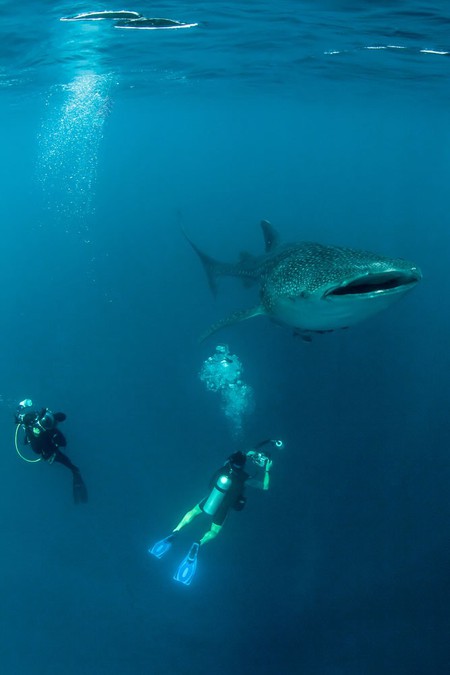 Each year more than a million wildebeest and thousands of zebra make their way across the Serengeti in search of greener pastures. The six-month-long journey starts in the southern Serengeti and moves all the way to the Maasai Mara, and, if you’re in the right spot at the right time, you’ll get to witness it. 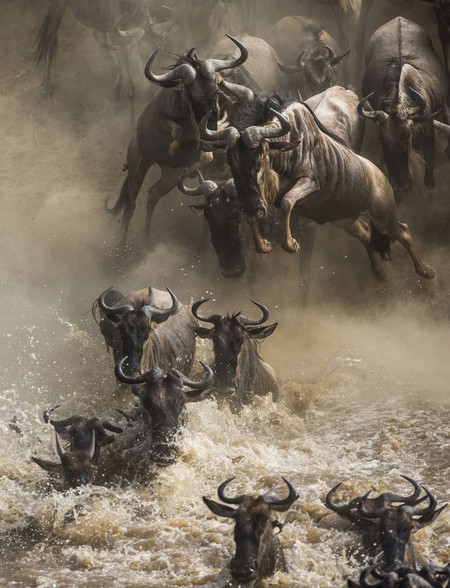 Ride in a Mokoro Through the Okavango Delta

A mokoro is a traditional canoe originally fashioned from hollowed-out tree trunks. Today, you’re more than likely to travel in a fiberglass version, but it’s nonetheless an incredible trip. A standing guide steers the mokoro with a pole while guests stay seated and take in the scenery of the Okavango Delta. You’re likely to spot hippos and crocodiles, which might sound terrifying but once you’re on the water the fear fades away. 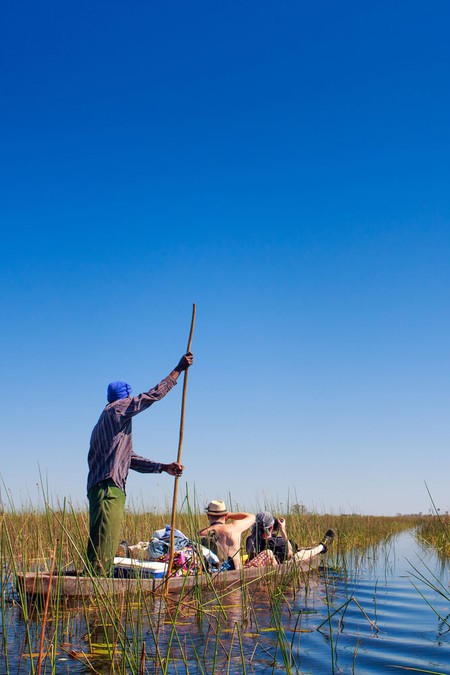 This is a fantastic way to get close to nature | © Gil.K / Shutterstock 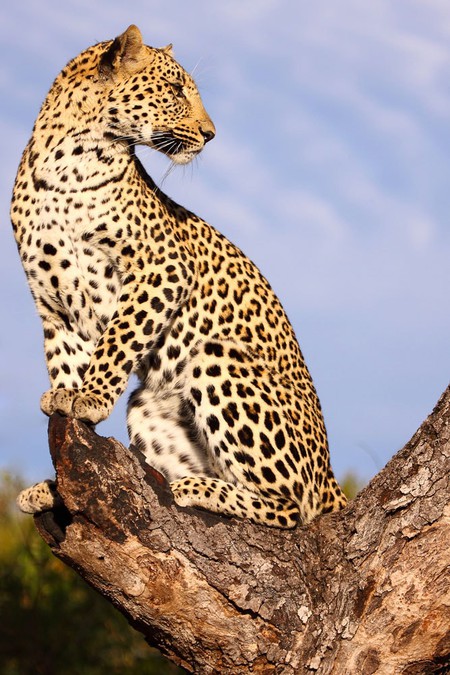 A leopard sits perched on a tree, as they so often do | © Dave Pusey / Shutterstock

The Seychelles archipelago consists of more than a 100 islands, each with a unique offering. From watching hawksbill turtles roaming on the white beaches to exploring Creole heritage, the Seychelles is paradise on earth. Mahé, Praslin, and La Digue are the main islands but travelers can visit the smaller, lesser-known islands as well. 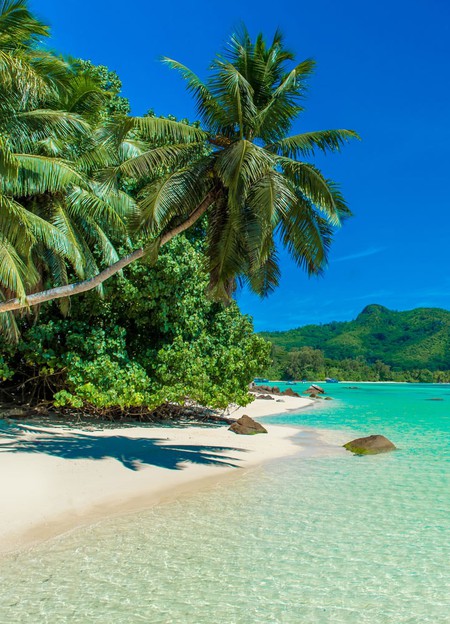 Only a four-hour flight from Johannesburg, this tranquil island is quickly appearing on tourist radars, so visit sooner rather than later. Explore the island on a three-day hike through lush mountains or take a helicopter ride over the island’s live volcano, which is bound to get the adrenaline pumping. 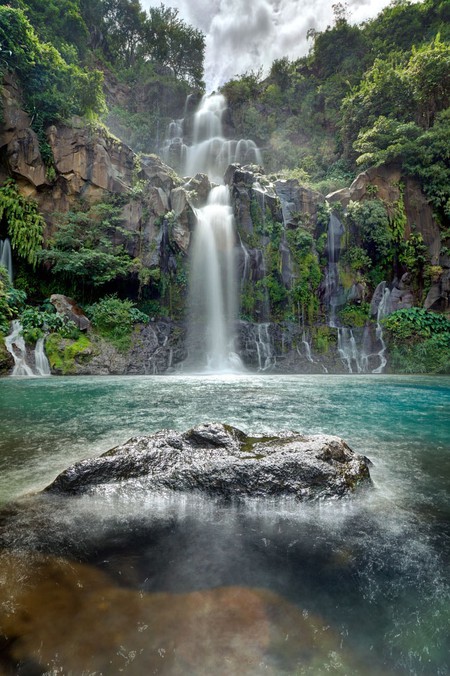 A hot air balloon safari over the vast plains of the Serengeti is unlike any other experience in Africa. Guests arrive at dawn as the balloon is inflated and then, as the sun rises, the adventure begins. Each flight is unique as all is dependent on the wind but you’re guaranteed to have the trip of a lifetime. The wildlife is rife and the scenery is out of this world, and after landing, guests are treated to a champagne breakfast to celebrate the morning. 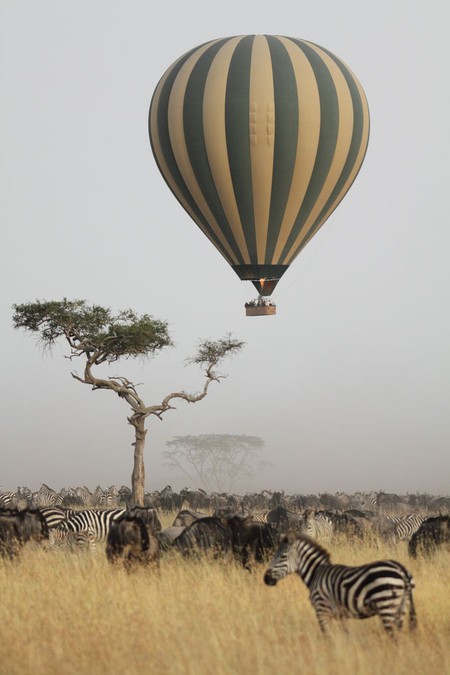 Go on a Volcano Adventure at Erta Ale, Ethiopia

Situated in the Danakil Desert, the Erta Ale is one of only a few active volcanoes on the planet. The lava lake surrounding it is a spectacle in itself, as vibrant colors mix together to create a scene unlike any other. Visitors can spend three days and nights exploring the summit of Erta Ale. 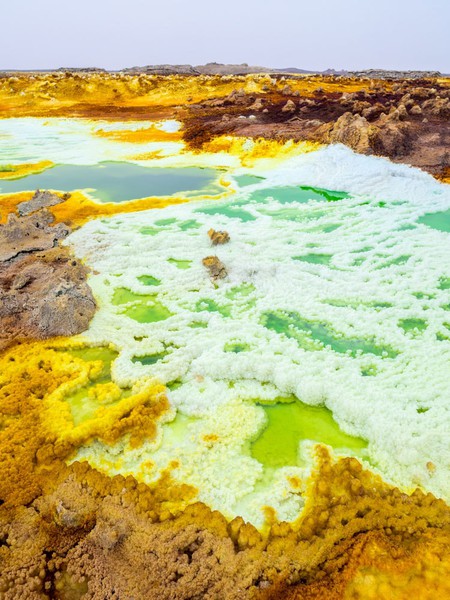 Travel by Train in Madagascar

Not your conventional public transport, the Manakara Express is a French-colonial railway that rides from Manakara on the Madagascan coast to Fianarantsoa. This old railway travels slowly and although the total trip is only 160 kilometers long, it can take 12 hours (or more) to complete. It’s not glamorous at all, but an unforgettable experience nonetheless and one of the best ways to see the beautiful vistas Madagascar has to offer. 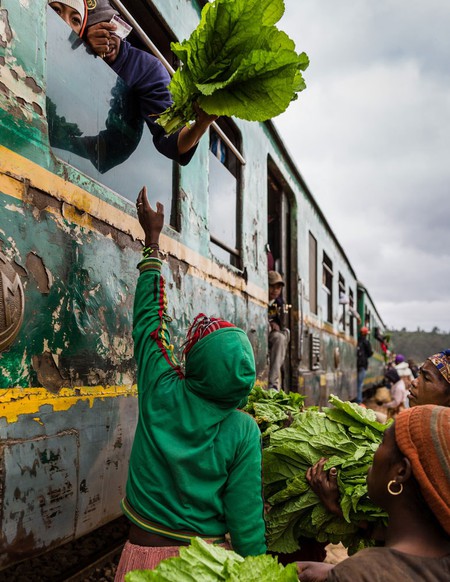 Ride a Dromedary in Morocco

Camels in Morocco are called dromedaries, due to them only having one hump. These comedic animals are a popular mode of transport for locals and tourists can hitch a ride across the desert on the back of a dromedary. What’s more characteristic of Morocco than a caravan of “camels” trekking through the desert, their long shadows creating the only shade for miles? 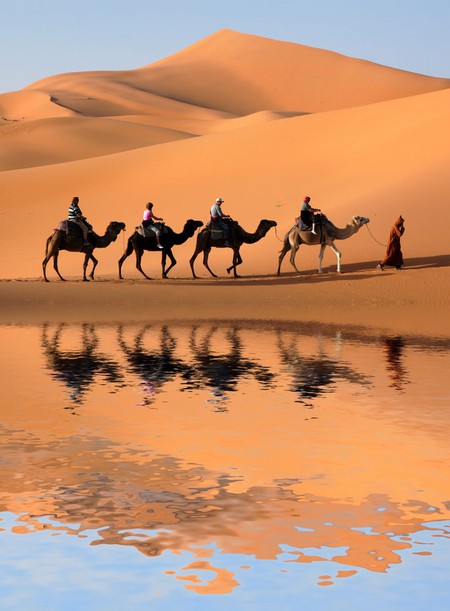 Dromedaries are much smaller than two-humped camels | © Vladimir Wrangel / Shutterstock

Voodoo is widely practiced in Benin, but we’re not talking about the kind where a needle is stuck into a doll. Voodoo in Benin is a cultural practice which broadly involves the performance of rituals in order to reach the divine. Visitors to the small town of Ouidah can attend the annual Voodoo Festival and witness these traditional dances and animal slaughtering, which all combine philosophy and medicine. 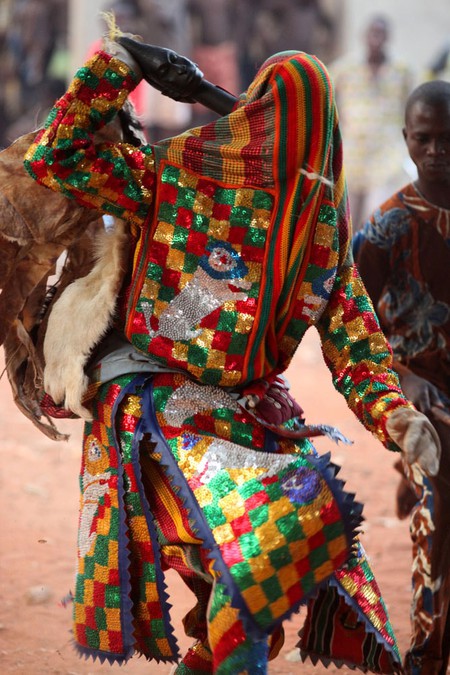 © Dietmar Temps / Shutterstock
Give us feedback