Fishing, the Lifeblood of Senegal 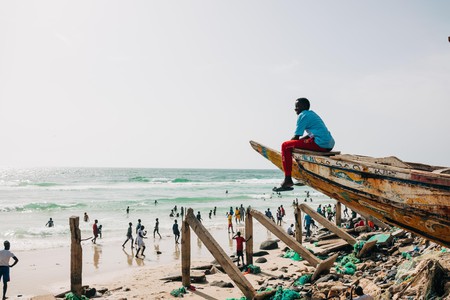 With its long Atlantic coastline, the mighty Senegal and Casamance rivers, the Sine-Saloum Delta and a vast network of waterways and tributaries, Senegal is a place where fishing is more than a way of life – it’s a major source of food, revenue and pride.

Fish dominates the plates of the Senegalese population and it’s the key ingredient in the national dish of ceebu jën (“rice with fish” in Wolof). The Senegalese eat up to 35 kilograms (77 pounds) of fish each year, accounting for up to 75 percent of the nation’s animal protein intake. Senegal even has a national fish, thiof (a white grouper). 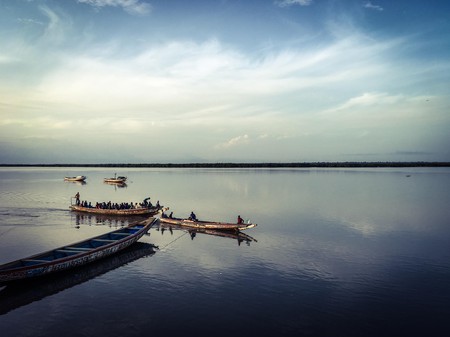 Fishing puts food on the table in more ways than one. It may only contribute 3.2 percent of the nation’s GDP, but it accounts for about 10 percent of all exports and 17 percent of the country’s labour force. In a country where employment is scarce, especially outside major urban centres, the wider fishing industry – from boatbuilders and fishermen to fishmongers and market traders – directly and indirectly employs some 600,000 people. These are jobs that rely on a combination of artisanal techniques, modern know-how and the country’s natural geography.

Brightly coloured pirogues (canoes) line the beaches from Saint-Louis in the north to Cap Skirring in the south. Ranging from agile dugouts to stocky U-shaped boats, Senegal is home to an estimated 20,000 pirogues. While some are used for tourism or transportation, the vast majority have one purpose: to plunder the Atlantic.

Thanks to a process called upwelling – whereby cold nutrient-packed waters from the ocean’s depths rise up to nourish life on the surface – West African waters are historically some of the richest in the world. 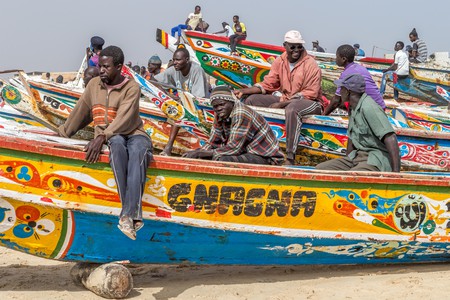 Small pirogues leave the ports of Soumbedioune, Mbour and Kayar at daybreak and return the same evening. Depending on the fishers’ local knowledge, the time of year and the target catch, these nimble boats will venture up to 100 kilometres (62 miles) from the shore to find a good spot, while larger boats will spend days at sea waiting for bigger hauls.

According to Fesco Ciss, a fisherman at Dakar’s Soumbedioune port, the best time to fish is during the rainy season, from July to September in northern Senegal, as the hauls are bigger then. He goes out with a group of three to five men and aims to bring back one big catch per week, which, depending on the season, could include merlu (hake), lotte (monkfish), dorade (sea bream) or capitaine (hogfish).

Senegal’s 530 kilometres (330 miles) of diverse coastline ranges from spits and sand flats to estuary mouths and offshore islands. Edouard Ndour plies the waters around Senegal’s most famous island, Île Gorée. He tells us, “Most of the time I fish with a harpoon (spearfishing), but from time to time I fish with a rod, with prawns or squid as bait.” 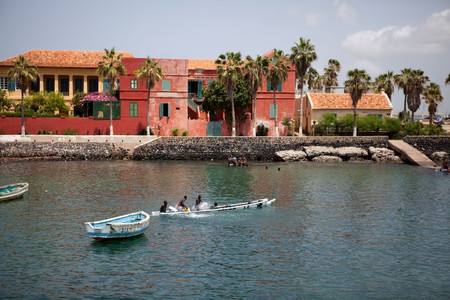 For Ndour, “The best season is when the water is warm and you have lots of different varieties of fish. Carangue [trevally], seriole [amberjack], barracuda, carpe rouge [red snapper] and sometimes thiof. During winter, badèche [golden grouper] and large squid are common catches, but the water is not clear and you have very weak visibility with the particles and the microorganisms.”

After a good day’s work, he either sells the fish on Gorée, to contacts in Dakar or wholesale to a fishmonger. “They buy your fish from you and then go and resell it to the processing plants.”

The Senegal River runs from the Guinean highlands to Saint-Louis, with almost half of its length running through Senegal. The Sine-Saloum Delta encompasses a vast area of mangrove forests and snaking waterways. The Casamance River flows from Senegal’s southeast for 322 kilometres (200 miles) before emptying into the Atlantic. A host of tributaries and channels run from them. 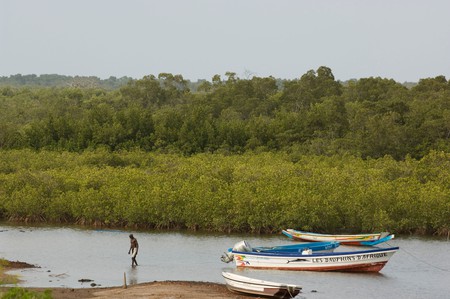 Pierre Ndao is a fisherman in Casamance’s waterways, known as the bolongs. A former wrestler, he sets off on his pirogue, along with multiple rods, onto the still waters.

Lying in the subtropics, Casamance has a longer rainy season than the rest of Senegal, which is Ndao’s favourite time to fish. “From July to November, the fish leave the sea to come and reproduce in the bolongs, and then their offspring grow up there.” The roots of the mangroves provide perfect nurseries for small fish and hunting grounds for larger predators, so the waters are teeming with life.

Whether dangling a palangrotte or casting a line, spreading a net or spearfishing, artisanal fishing has long been practised in a sustainable way here. Yet, Senegal faces a clear and present danger from depleting Atlantic fish stocks.

Foreign trawlers – which can catch the same amount of fish as 1,700 Senegalese pirogues – roam the waters either illegally (40 percent of the fish caught in West Africa is caught illegally) or with permits bought on favourable terms (the EU, for example, gave just $2 million to Senegal in 2018 to fish its waters under a ‘sustainable fisheries agreement’). These trawlers mostly catch small pelagic species to make fish oil or fishmeal, which is processed and sent back to feed domestic fish stock (like salmon in fisheries), pets or livestock. 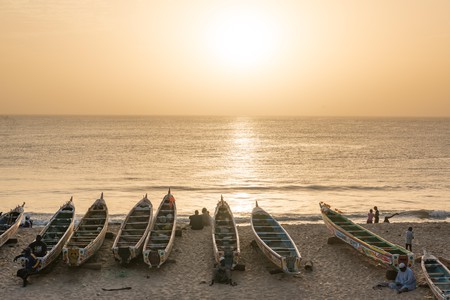 The fishmeal and fish oil industry in West Africa is worth £1.86 billion and has a troubling domino effect on local populations. Less fish in the ocean not only means less food on Senegalese tables, but also reduces incomes and employment, while forcing Senegalese fishermen to work longer hours.

Fishing has long been the lifeblood of Senegal – with fishing seen as a noble, multigenerational profession – but it remains to be seen for how much longer.