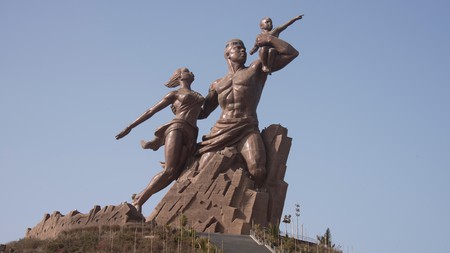 The Monument de la Renaissance is the tallest monument in Africa, looming over the city of Dakar | © Salvador Aznar / Alamy Stock Photo

Dakar is a city of monuments. Home to the tallest statue in Africa, Senegal’s capital also boasts a number of striking memorials that shed a fascinating light on both Senegalese and African history. 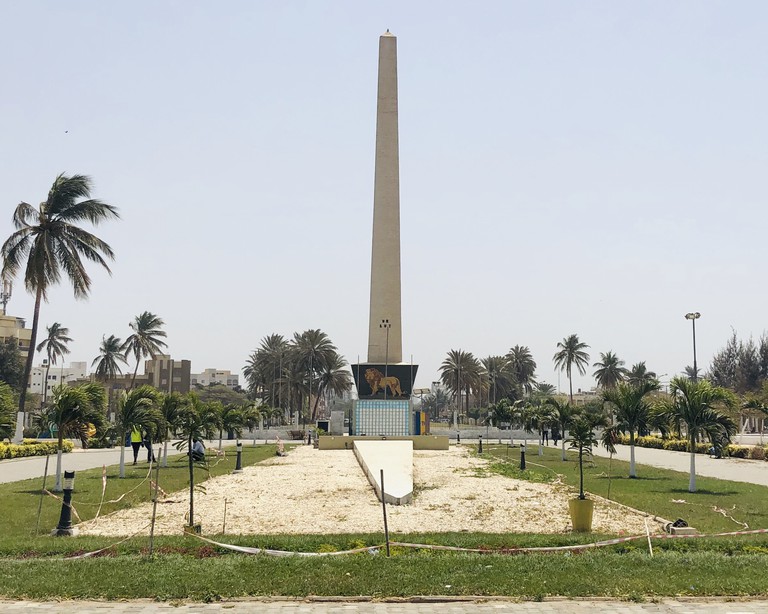 When it comes to monuments, obelisks sure are a popular choice. The Vatican has one in the heart of St Peter’s Square. Paris has one in the Place de la Concorde. Washington, DC has the world’s largest at 169 metres (554 feet) tall in the middle of its National Mall. So, when looking to commemorate its independence, Senegal knew just where to turn. Located at the aptly named Place de l’Obélisque – an open area that frequently hosts events, demonstrations and even large-scale screenings of national events – the Obelisk is inscribed with the Roman Numerals MCMLX (1960 – the year of independence from France) on its principal side, with the other three spelling out Senegal’s national motto: “Un peuple, un but, une foi” (one people, one goal, one faith). 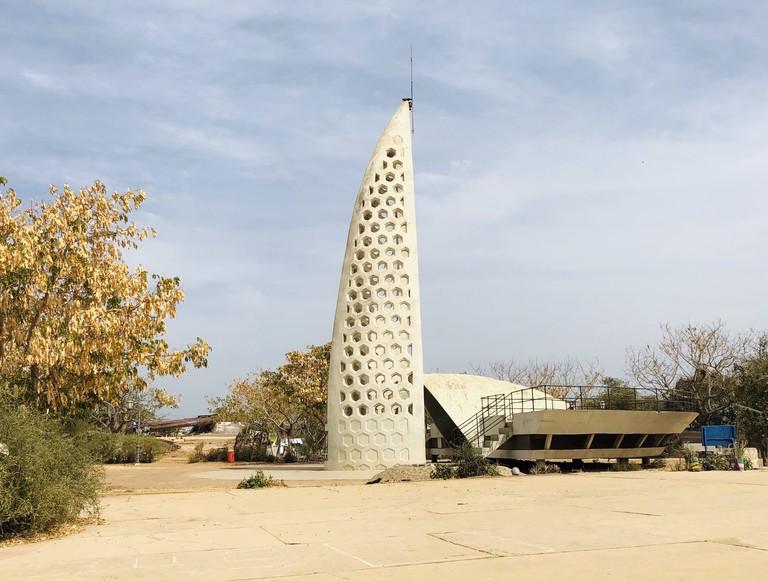 The relatively small 28-hectare (69-acre) island of Gorée has had an outsized history. Since the 15th century, this UNESCO World Heritage site has been the temporary colonial home to the Portuguese, the Dutch, the English and the French, before being returned to Senegalese hands in the mid-20th century. It was also the temporary home to an estimated 20 million people from across Africa who were bundled onto ships and sold as slaves in the Americas and Europe. The island today is a peaceful sanctuary and pilgrimage site for many of the African diaspora, and in recognition of the atrocities, a monument has been constructed at the island’s highest point. Designed in the shape of a ship’s hull and sail, the Gorée Memorial was finished in 1999, but was just a taste of things to come. After decades of inactivity, Senegalese President Macky Sall recently announced that construction of the long-awaited Gorée Memorial complex will start in 2019 on the site of the former Club Med in Almadies – the westernmost point of mainland Africa. 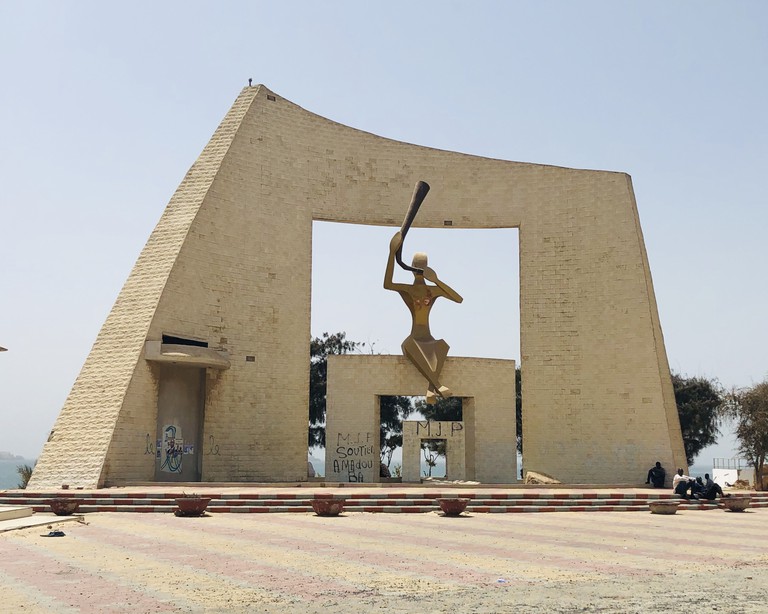 To many people living in Dakar, this is ‘that large statue on the way down to Plateau’. Translation: the 16.5-metre-high (54-foot-high) monument situated along the western Corniche road as you approach downtown Dakar. It has a name, too, La Porte du Troisième Millénaire (the Door of the Third Millennium), which gives clues to its significance (opening the doors of Africa to the new millennium) and inauguration date (2001). The monument features three doors of increasing size, with a statue of a woman sitting on the second door playing a horn to symbolise unity and courage. Like ‘the Monument’, la Porte was designed by architect Pierre Goudiaby Atepa, the brains behind many of Dakar’s imposing buildings, including the two completed Seven Wonders of Dakar. It has also faced its fair share of criticism, mainly regarding cost, but also placement, as some fear the doors may eventually fall into the sea due to coastal erosion. 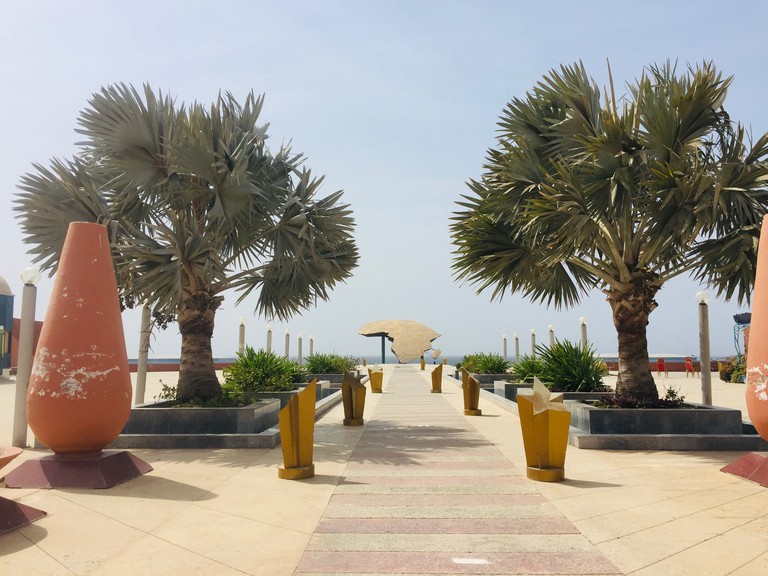 Having opened in 2009, the Place du Souvenir is a celebration of shared African history and experience. From museums celebrating the impact of women in African society to a boulevard showcasing the continent’s most influential figures – from Ousmane Sembène, the ‘Father of African Cinema’, to Nelson Mandela, the Place of Remembrance is a testament to Africa’s imprint on the world as well as a reminder of its nations’ intertwined past, present and future. This notion is perfectly encapsulated by the Africa monument. Its colour faded from dust, it stands resolutely in front of the crashing Atlantic waves, highlighting the collective suffering and impact the continent has had in regard to the West.

It’s not quite Rodin’s Le Penseur, but the ‘Mermoz thinker’ is a reference to the education and educators of Africa. Tucked away in a housing estate originally built for teachers in the central district of Mermoz (named after French aviator Jean Mermoz), it’s a blink-and-you’ll-miss-it monument that has been immortalised in wooden carvings by numerous beachside vendors and marketplace artisans. Inaugurated in 2002, the monument’s supporting cast includes supremos Pierre Atepa and Abdoulaye Wade, as well as former Gambian President Yahya Jammeh. 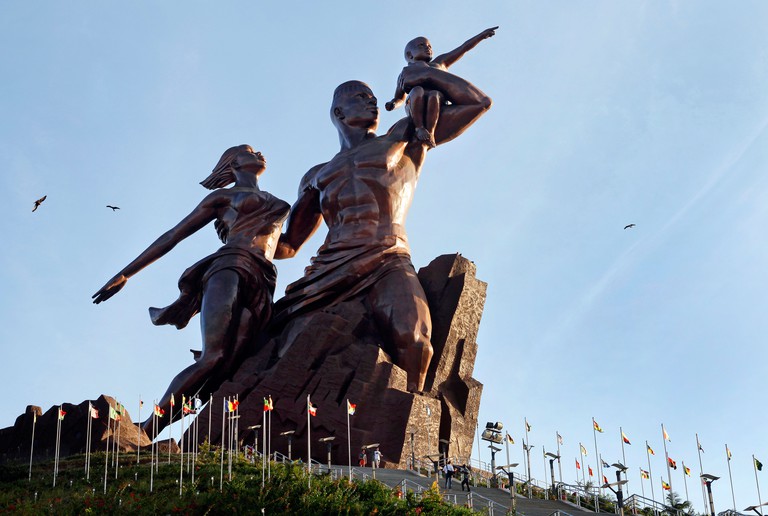 In Dakar, the Monument de la Renaissance is simply known as ‘the Monument’ and for good reason: the 49-metre-high (161-foot-high) bronze statue is the tallest monument in Africa and looms over the Dakar skyline from its hilltop perch in the west of the city. It’s also the country’s most controversial tribute. Built by the North Koreans at a cost of $27 million in 2010, it has been criticised for being expensive, unnecessary, macho, religiously insensitive and for bearing a resemblance to former Senegalese President, Abdoulaye Wade, who commissioned it (and still retains 35 percent of the Monument’s profits). However, scaling the 198 steps to the base of the Monument will not add to Wade’s coffers (it’s free), and on a clear day it offers unbeatable views across Dakar. 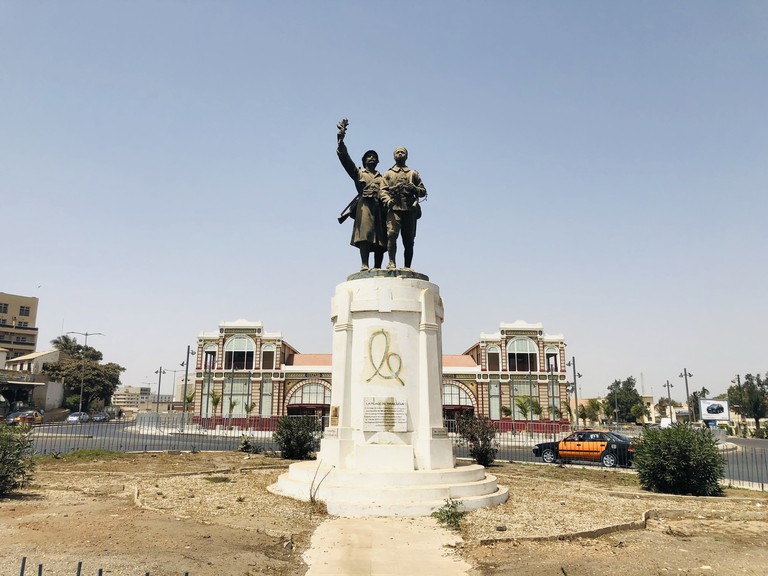 Demba and Dupont: a Senegalese tirailleur and a French soldier. Cast in bronze in 1923, ‘Demba and Dupont’ is one of Dakar’s oldest and most travelled monuments, having inhabited various roundabouts in Dakar, and a cemetery, before finding its current home opposite Dakar’s train station in Plateau. Known as the ‘Black Army’, the Tirailleurs were a phalanx of African troops in the French colonial forces. Founded in 1857, they fought under the French flag in both WWI (200,000 African troops) and WWII (140,000) in Europe and across Africa. The monument was originally designed to show that African and French soldiers were ‘brothers in arms’, but has come to symbolise the valour and loyalty of African fighters.

Another one of the ‘blink and you’ll miss it’ monuments, but this time it’s for arguably Senegal’s most famous individual, Léopold Sédar Senghor. Opposite the museum dedicated to his legacy, the iconic spectacled figure of Senegal’s poet-president sits on a chair of bronze with an ocean backdrop and usually a coffee stand for company. Presiding over the first 20 years of Senegal’s independence, Senghor is credited with laying the foundation for Senegal’s current stability and was a driving force of the Negritude movement, which he co-founded.