The Best Bukas in Lagos, Nigeria and the Legacy of 'Iya Eba' 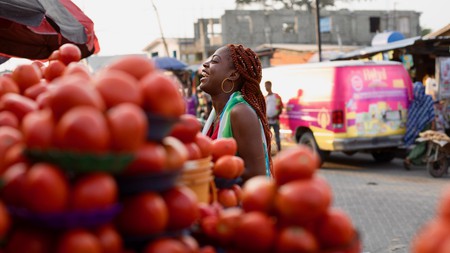 No dining experience in Nigeria would be complete without a visit to a buka, the hole-in-the-wall, street-style canopies, and at times fully established no-frills restaurants, that can be found in every village, town and city across the country.

Bukas (also referred to as a ‘mama put’) represent a real down-to-earth approach to eating well outside the home and is usually food on the go, with an ethos of ‘tastiness with speedy service’. They are also synonymous with home-cooking and are expertly prepared by women who know a thing or two about Nigerian cuisine.

Dishes range from straightforward rice and stew to gbegiri, amala, ofada stew, egusi, and vegetable soup. The best way to find the best bukas is through word of mouth and by asking locals, as these restaurants are location and cuisine specific. 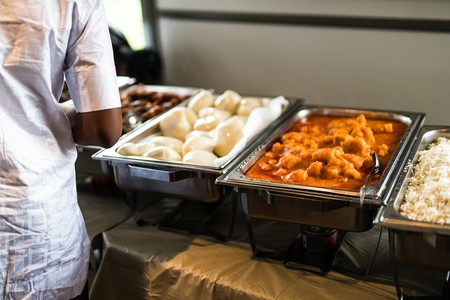 In Lagos, Bukas can literally be found dotted on every street from the mainland to the island, and even on street corners of affluent neighbourhoods like Ikoyi, Lekki and Victoria Island. One of the city’s longest running establishments is Iya Eba, located on Berkley Street in the heart of old Lagos in Onikan, a stone’s throw from the National Museum of Lagos and the famous Tafawa Balewa Square.

Iya Eba translates as ‘Great Mama Eba’, and it has been spearheaded by Mrs Fausat Abike Adebayo (aka Iya Eba) for the past 50 years. “I sell amala, eba, rice, ofada stew and a lot a lot of other delicious delicacies,” says Mrs Adebayo. “I started this food business at a young age and was greatly encouraged by my parents. I am grateful that I have been able to feed Lagosians and run a profitable business that began on a street corner, to working for others and now as the place stands, my own business.”

Iya Eba is a cosy place with welcoming staff who are attentive but work fast to move customers in quickly during busy lunch and after-work periods. A visit begins with going straight into the outdoor cooking area and kitchen, selecting uncooked food in quantities that are dished out as the food is freshly prepared. The most popular dish here is amala with stew and ewedu (see the food guide below), an unmissable and healthy option that keeps customers coming back time after time. Bukas continue to serve a need for delicious food served quickly. Visitors won’t have really experienced dining in Nigeria without having eaten at a buka, a truly authentic rite of passage for Nigerian food that brings people from all walks of life together.

Here are some of the best bukas in Lagos.

A popular local establishment located close to the University of Lagos in Yaba, the city’s tech hub, White House is popular for its wide-ranging menu, late hours and free Wi-Fi.

Another old establishment dating back to the 1960s, Amala Shitta Shitta, as its name implies, is the go-to place on the mainland for its amala, a popular Yoruba ‘swallow’ made from yam or plantain that has been peeled, sliced, dried and then grated or ground into a fine powder. Another popular dish here is its abula (ewedu, gbegiri and obe elépo) and a top seller for their restaurant. The restaurant is located on the ground floor of a high-rise on the Shitta roundabout in the Surulere neighbourhood of Lagos.

Housed in the building that used to be the Ghana High Commission, hence the name, this buka, located on a street parallel to Iya Eba on Lagos Island, is the place to go for its jollof and ewa aganyin, a local delicacy of creamy beans with a dark fiery pepper sauce.

The place for egusi and pounded yam with catfish, Yakoyo is worth the trip across town for exploring a wide variety of Yoruba dishes.

This buka specialises in rice and stew, with the best and hottest pepper stew and rice on the mainland.

A guide to knowing your buka

A cooked dish made out of yam and/or cassava flour. Yams are peeled, sliced, cleaned, dried and then blended into a flour which is also called elubo.

By far the most popular ‘swallow’ and a staple cassava dish made from dried grated cassava flour, commonly known as garri. Visitors don’t get far in Nigeria without knowing what eba is or what it’s made of.

Soup made with African honey beans or brown beans. The beans are soaked to soften them, then they are peeled (or not), cooked until very soft and blended into a very smooth and velvety soup. Gbegiri is best enjoyed with either tuwo shinkafa or amala and ewedu soup.

Pepper and tomato stew is one of the most popular Nigerian food recipes and a staple for jollof rice, and other swallows. This can be made with meats, chicken or fish, and more experimentally without meat for vegetarians, but it is not very popular.

While the Yoruba call it ewedu leaf, it is called achingbara in Igbo, and rama in Hausa. They are jute leaves (Corchorus Olitorius) that are added into the delicious soup served with a combination of stew and gbegiri.

Jollof rice hardly needs any introduction. A favourite across West Africa, rice is boiled with peppers, tomatoes, spices and meats to create this delicious dish.

This is a healthier, local brown rice, which is unpolished and not genetically modified. It is a fibre-filled alternative to white rice and has a pungent odour.

Every tribe in Nigeria has its own version of vegetable soup, but the common ingredient is the use of ugwu, or pumpkin leaves. From edikaikong to efo riro to afang, the choice of vegetable depends on the buka patron.

These are beans that are made extremely soft or mashed, commonly eaten with barely ground dark pepper and tomato stew, which is very spicy and peppery.