How This Modern-Day Priestess Is Keeping Nigerian Spirituality Alive 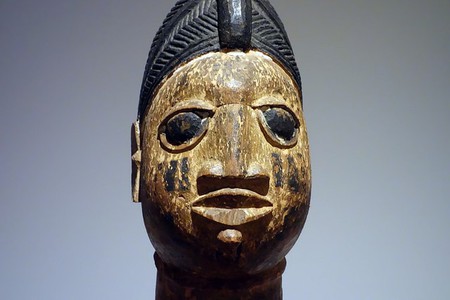 Before Nigeria was colonized by the British, traditional worship of ancestral deities was the norm and a spiritual practice of the people. Every tribe and region had their distinctive way of life in terms of spirituality and acknowledgement of cultural roots. However, in recent times the practice has been shunned and termed as unacceptable by modern-day religious practitioners, leaving traditional worshippers with no option but to hide away from criticism and the stigma associated with the practice. One woman is bucking the trend – here’s what you need to know.

It definitely took a a ton of bravery for Ẹgbẹ́ladé Omítọ̀nàdé Ifáwẹ̀mímọ̀ – a graduate of Economics from Obafemi Awolowo University, Ile-Ife in the north-east of Lagos – to become the modern-day Orisha and Ifa priestess of our time. Taking on the responsibility of teaching and preserving the spiritual practices of the Yoruba people, to reach a wider audience – particularly youths across social media platforms – the 20-year-old started her journey of spiritualism at the tender age of 5 after her parents, who are dedicated traditional worshippers, initiated her into the practice of the Orisha deities. At the age of 15, the young lady spent her days learning at the feet of the elders, mastering the old ways of divination and rituals, as well as practising the science of healing and chanting incantations to the deities. It’s no surprise that she was bestowed the honor of becoming a priestess at the age of 20.

I am only but a vessel in the hand of Olodumare and Orisas 😍😍😍 Ori Modupe O!

Ifáwẹ̀mímọ̀ hopes to redefine the concept of Yoruba spirituality and win general acceptance by leveraging publicity and public enlightenment as well as living an exemplary life as a role model. “Our people have turned away from it because of ignorance, also they lack self-knowledge. But I do try my best to enlighten them in my own little knowledge that I have in African spirituality. So help me Olódùmarè,” she told Brittle Paper

Ifáwẹ̀mímọ̀ makes reference to Yemoja – the offspring of the founding fathers of the universe Oduduwa and Obatala. She married Agayu the volcano god of fire, and they had one son, Orungan, and fifteen other Orishas. She is known as the mother of all Orishas (she is the creator goddess of the Yoruba tribe), goddess of water bodies and the patron deity of the Ogun river (Odò Ògùn) .She is believed to represent fertility, childbirth, conception, parenting, love, and healing.

Our destiny does not start when we make either Ifa or Orisa initiation. It starts when we are born. Through initiation we learn its name and spiritual identity Ire O!!!!

Honored not only in Africa but also in Brazil, Yemoja is represented in the form of a mermaid, and is associated with the moon, water, and femininity. Myth says the goddess went with the members of the Yoruba tribe when they were abducted and sold to slavery. She is today honored with appraisal in different names; Brazilians and Cubans often compare the deity to Virgin Mother Mary of the Catholic Church. According to myth, when her waters broke, it caused a flood creating rivers, oceans and streams, also producing the first offspring of humans on earth from her womb.

She is paid accolades at various times of the round the world. Yemoja festival in Nigeria lasts for 17 days and it is a period of festivity, prayer, sanctification and sacrifice where different groups and worshippers come from within and outside Nigeria, the United States of America, Japan, the United Kingdom, Brazil, Togo, and Ghana among other countries to pay homage to the goddess.

Yoruba spirituality is gradually gaining acceptance and finding its way back into modern-day society and the music scene. Beyonce notably channeled the Yoruba fertility goddess Ọṣun at the 2017 Grammys and in her visual album Lemonade, while the French-Cuban duo Ibeyi featured chanting incantations to the Orisha spirits Oya and Eleggua on their debut album Ash. There are also a number of best-selling fantasy books featuring stories from the Yoruba mythology – Tomi Adeyemi’s Children of Blood and Bone is set to air as a trilogy on the big screen.