Terrifying, beautiful, desolate, and romantic all at once, the sprawling Namibian desert with its almighty saffron-hued dunes and sweltering skies has provided the magnificent backdrop for a diverse range of films. We take a look at the best ten films shot in the stunning south-east African sands. 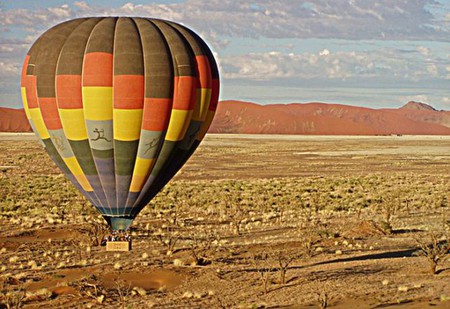 In 2011 Ron Fricke and Mark Magidson released their 5-years-in-the-making collaborative project Samsara – a visually breathtaking documentary which, deriving from the Buddhist term meaning ‘cycle of existence,’ documents human experiences. From Egypt to Hong Kong, Italy to the United States by way of the awe-inspiring dunes of the Namibia Desert, Samsara offers a poignant glimpse into the lives – painful, thrilling, dull, and miraculous as they are – of human beings across the globe.

Namibia’s desolate yet strikingly beautiful desert landscape provided the ideal dystopian setting for the latest installment in George Miller’s Mad Max saga. In a post-apocalyptic world, Max (Tom Hardy), his companion Furiosa (Charlize Theron), and her band of fellow fugitives unite to defeat a ruthless warlord who pursues the fleeing rebels across the scorching dunes in an explosive blockbuster.

Evocative of pre-civilisation barrenness as much as it is of post-apocalyptic destruction, the vast Namib Desert was also the locale for Roland Emmerich’s prehistoric epic 10,000 BC. When an army of warlords raids the Yaghal camp, kidnapping several tribe members as well as Evolet (protagonist D’Leh’s heart’s desire), the young mammoth hunter must lead an improbable band of heroes across miles of uncharted terrain to reclaim them. Though special effects were needed to visually generate the sabre-toothed tigers that the tribe must fend off, it was the very real, very beautiful Namibian dunes that provided the film’s dramatic backdrop.

Stanley Kubrik’s 1968 science-fiction film continues to be regarded as one of the most influential films ever made. As well as receiving four Academy Award nominations, one of which it won for its visual effects, in 1991 it was granted a coveted spot in the USA’s National Film Registry. Though most of the movie was shot in British production studios, the opening scene – set in Cenozoic-era Africa – features stunning shots of Namibia’s fiery, sun-speared horizons.

Alongside Canada, Thailand and Angelina Jolie, Namibia stars in the 2003 romantic drama Beyond Borders, a poignant film that tells the story of Sarah Jordan, a naïve and sheltered American socialite whose eyes are opened to the plights of poverty-stricken human beings after meeting humanitarian worker Dr Nick Callahan. She abandons her comfortable life in London to join Callahan in Ethiopia, where she supports his work in refugee camps. Beyond Borders highlights the extraordinary dichotomy between wealth and poverty, development and desolateness across the globe.

A Far Off Place

A beautiful tale of strength and solidarity, A Far Off Place follows the two survivors of a ruthless attack at the hands of poachers on an isolated farm in the savannah. As the only witnesses to the massacre, Nonnie and Harry must flee for their lives, but their only means of escape is by crossing the African desert on foot. Trekking across the barren, seemingly infinite sand dunes, where the only options are to keep going or to perish in the stifling heat, is perhaps the ultimate test of human endurance.

In 1957 Harvard University’s Peabody Museum of Archaeology and Ethnology sponsored an expedition in the Namibian desert, in which John Marshall followed four bushmen in pursuit of a giraffe. BAFTA award-winning ethnographic film The Hunters is the result. Capturing the trials and tribulations of the indigenous !Kung people, Marshall’s The Hunters is an eye-opening insight into the unique nature of human life in the desert.

In 2003, Disney released a family film produced specifically for IMAX cinema with striking wide-angle shots so that the Namibian and South African deserts in which it was filmed could be fully appreciated. Shetan, the black stallion from which the film derives its name, rescues and befriends Neera, a young Arabian girl who finds herself alone in the desert after becoming separated from her father.

Flight of the Phoenix

Despite being set in Asia’s Gobi desert, director John Moore selected Namibia as the location for his 2004 film Flight of the Phoenix, a remake of the 1965 movie of the same name. Starring Dennis Quaid and Giovanni Ribisi, the film follows a group of plane crash survivors who must construct a new aircraft from the wreckage in order to escape. Though not well received by critics, Namibia’s shadowy pallid-yellow dunes and hazy skies certainly make for an aesthetically pleasing setting! 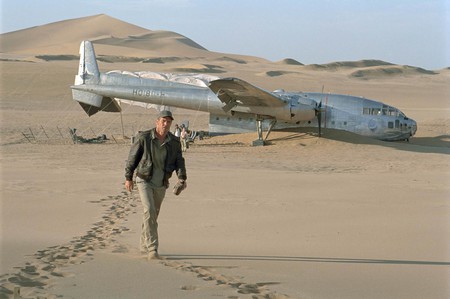 In American psychological thriller The Cell, Dr Catherine Deane (Jennifer Lopez) operates a virtual reality device which allows her to temporarily enter the minds of coma patients in an attempt to coax them back into consciousness. The Namib Desert provided the ethereal landscape for the film’s opening dream scene – Lopez is an angelic, windswept vision as she wanders the dunes trying to communicate with the young victim of a boating accident, lost in the bleak desert of his sub-conscious mind.