An Introduction to Namibia’s Himba People 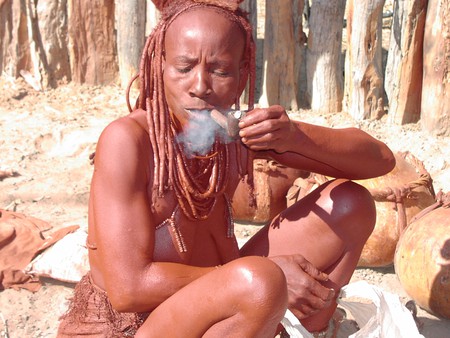 Strolling along Independence Avenue, one of the most famous streets in Namibia’s capital, Windhoek, you might see an indigenous group selling goods. Their appearance can be shocking for those not familiar with them – women with long strands of hair covered in clay wearing calfskin skirts and completely bare-chested. These people are a part of the indigenous Himba tribe who have found a home in the Kunene region located in the north-eastern areas of Namibia. Here’s our introduction to Namibia’s Himba people.

The origins of the Himba people

Considered a nomadic tribe, their origins can be traced to central and West Africa, but they have since settled in Angola and Namibia. The OvaHimba choose not to conform to modern society and opt to still wear their traditional clothing, which consist of loin cloths and miniskirts from animal skin. They are also easily distinguishable by their skin – they rub red ochre and fat all over their bodies, which helps protect them from the scorching Namibian sun giving them a brilliant reddish tinge. 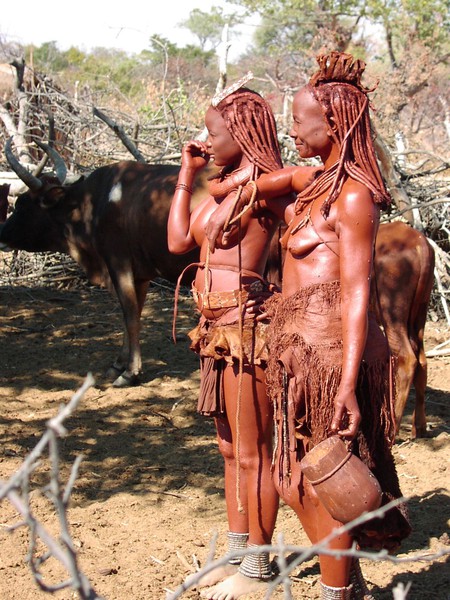 Himba women adorned in their traditional clothing. They often survive by taking care of cattle, sheep and goats | © Christof Maletsky

Seeing colour in a different light

According to Gondwana Namibia, the Himba tribe also see colour a different way. ‘Serandu’ describes reds, browns, oranges, and some yellows, ‘dambu’ involves greens, reds, beige, and yellows, and they would also call a caucasian person this. ‘Zuzu’ describes darker colours, while ‘vapa’ is a word for yellows and white. Lastly, ‘buru’ describes greens and blues.

The hair of the Himba

The hair of the OvaHimba men and women is quite prominent, as it symbolises growth and maturity. Girls have their hair braided, often down to the chest, with a fluffy style at the end and a ‘crown’ on top of the head. The men also have to wear a braid from a young age, and once they are married, they eventually wear a cap to show that they are married as their hair cannot be too exposed. 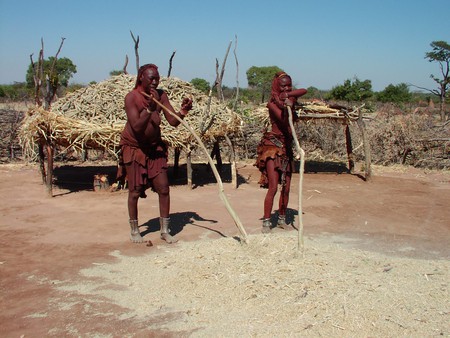 Often wearing jewellery from ostrich eggs or iron, the Himba people also use this craft to sell items to tourists. In the villages where they reside, they take to livestock farming with sheep, goats and cattle. This is also how they obtain meat and milk, which are also sold. Not to mention maize and millet farming, which is also common within the tribe.

OvaHimba men are allowed to marry more than one wife, but these practices are arranged by the father of the brides. Much like the Olufuko festival for the Mbalantu tribe, the practice is surrounded by controversy.

As much as the traditional way of living is celebrated, the bad rains have forced several Himba people to move to the city and use their skills to make a living. However, tourists are encouraged not to take photos of them without consent otherwise they could end up in quite an unpleasant confrontation.