The Top 10 Things To Do and See in Casablanca 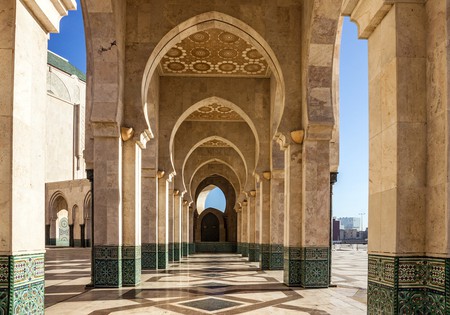 Casablanca, Morocco‘s commercial centre, tends to come lower down on the tourism list, behind the likes of Marrakech and Rabat; however the city’s French colonial legacy, entwined with the traditional Arab culture, ensures there’s lots of diverse things to do and see. Alongside the art deco buildings, and old stone medina alleys, visitors can find museums, palaces, and the second largest mosque in the world.

Completed in 1993 and located on a platform overlooking the Atlantic Ocean, the iconic Hassan II Mosque is the second-largest mosque in the world, and one of few open to non-Muslims (through selected guided tour opportunities lasting around an hour each). The mosque, which can accommodate up to 25,000 worshipers, offers Muslims the chance to pray on a glass floor, giving the unique feeling of praying directly over the sea. Everyone is welcome to admire the beautiful piece of architecture at any time from the spacious courtyard, which alone can accommodate a further 80,000 people. 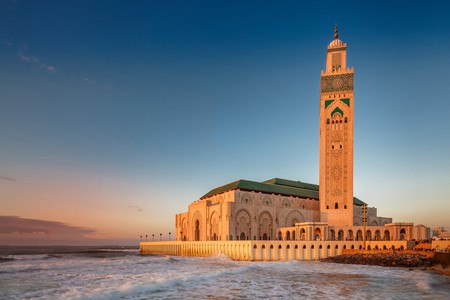 Located in the same region as Hassan II Mosque, La Corniche is a beach front district offering an array of dining experiences as well as pools and beach access. On a hot day, the area can be found brimming with surfers, swimmers and sunbathers, offering a less traditional and a more holiday-escape side of Morocco. La Corniche offers an area full of entertainment, and the chance to go on a refreshing walk on the beach, or even a dip in the sea if you’re feeling daring.

Located at the end of La Corniche region is Morocco Mall, one of the biggest shopping centres in Africa. A modern hub, Morocco Mall offers enough to entertain anyone from families to couples, and for the whole day. On top of the extensive range of shops, anything from H&M to Dior, and a vast range of food options, Morocco Mall also hosts an indoor aquarium complete with a small shark, a fountain display outside, and even indoor ice skating and an indoor fairground. There really is something for everyone. For a taste of the traditional Morocco, there’s even an indoor souk (market), however traditional shopping is best left to the old medina.

Unlike in many Moroccan cities, the old part of town is surprisingly easy to pass by in Casablanca. There is the temptation to head straight out to the seaside to visit the Hassan II Mosque and beach area, however discovering the charm hidden behind the old city walls is a must on any trip to a Moroccan city. With its typical labyrinth style character, getting lost is undoubtedly easy, but with a bit of caution this can be a hidden beauty in itself. Indeed, it poses little risk as you’ll soon find yourself at one end or the other of the old quarters. Experiencing the pace of daily life, with children running in the narrow streets and men smoking in cafés, you can join the shoppers in their search for traditional treasures, and find the little sights buried in the medina, such as the Berber Mosque. 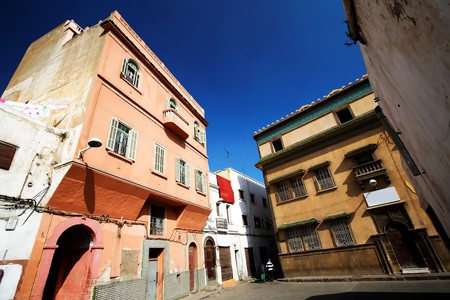 This unique museum, being the only Jewish museum in the Arab world, offers an insight into the history, religion, traditions and daily life of Jews in a Moroccan Civilisation. Presented through exhibition rooms containing paintings, ornaments, clothing etc, as well as complete displays of Moroccan synagogues, it demonstrates not only the Jewish influence on Moroccan society, but highlights the history of interfaith coexistence in Moroccan civilisation.

For a taste of luxury and unique beverages, head to the Sky 28. The bar offers guests the chance to sit in a tasteful atmosphere, overlooking the city, and drinking a pricey yet worthy cocktail. Best visited at night while admiring the views of the illuminated city, this is an escape from the hustle and bustle of the old medina and the traditional Moroccan life. There’s even live music to create a chilled and comfortable atmosphere. 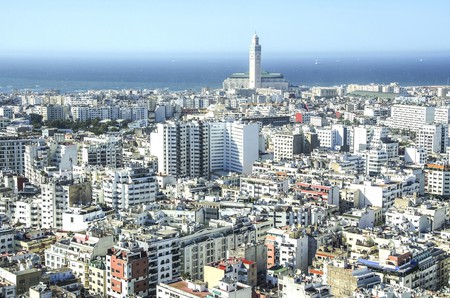 View over the city of Casablanca, Morocco | © Marianna Ianovska/Shutterstock

Cathedral, Park
Facebook
Email
Twitter
Pinterest
Copy link
Share
Map View
South of Place Mohammed V lies the Parc de la Ligue Arabe. Designed in 1918, this park, complete with a palm-tree-lined avenue, is Casablanca’s biggest open space. Perfect for games and walks, and offering a choice of small cafés, the Arab League Park gives guests the chance to relax and admire the flora of Africa, and even venture to the Cathédrale de Sacré Coeur, the neglected former cathedral on the edge of the park, hinting to the Art Deco past of Casablanca.
Open In Google Maps
Casablanca, Casablanca-Settat, 20250, Morocco
Give us feedback

A visit to the administrative hub of Casablanca, the Place Mohammed V is a chance to experience first-hand the work of architect Henri Prost. Surrounded by public buildings which set the scene for further buildings throughout Morocco, including law courts, the square also hosts the statue of Marshal Lyautey, the first French Resident-General in Morocco from 1912 to 1925. In addition to this monumental statue, the square features a grand fountain dating back to 1976 which, at certain times of the day, hosts a music accompanied water show. 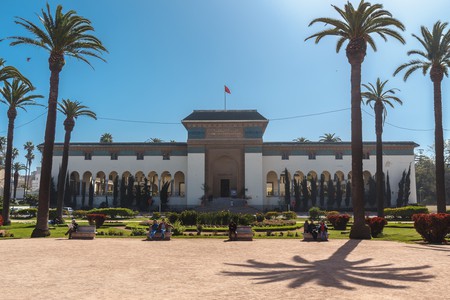 Part of the ONA Foundation, one of Morocco’s primary cultural foundations, the Villa des Arts is one of the largest museums in Casablanca and is situated near the Parc de la Ligue Arabe. The Villa des Arts promotes contemporary arts in a framework of Moroccan culture and heritage and features around 800 artworks permanently, as well as temporary expositions of international and contemporary artists. It provides a different perspective on Moroccan culture, and even the building itself is a beautiful piece of Art Deco architecture daring back to 1934. Hosting numerous cultural events, the Villa des Arts attracts locals and tourists all year round.

Located near the new medina is yet another one of the King’s palaces. The King has a palace in almost every city just in case of a royal visit. The King’s Palace in Casablanca is just as grand as the rest of them, with its enormous open square at the front, a surplus of guards, and a grand exterior which anyone can enjoy. Unfortunately any closer access seems difficult to come by, however it’s worth it just to see from the outside and admire the architecture. 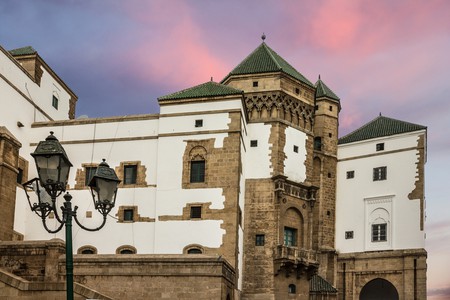 Morocco, Royal palace in Casablanca | © Vlada Photo/Shutterstock
Give us feedback