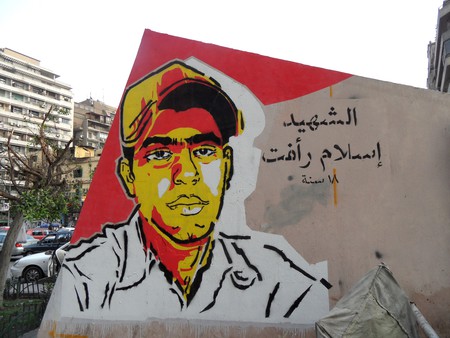 Following the 25 January Egyptian Revolution came a deluge of street art. No longer was public expression under the thumb of the oppressive Ministry of Culture. Instead, political, cultural, and social expression took the form of bold designs and striking colours, adorning Cairo’s walls and buildings. However, contemporary art in Egypt is not limited to this street view as artists in past decades have consistently explored Egyptian heritage across different mediums and in distinctive and alluring ways. We profile 10 Egyptian artists to watch.

Alaa Awad came to the forefront of Cairo’s graffiti scene in 2012 when he painted a Port Said massacre memorial mural. His concern with retaining and reviving Egyptian identity is immediately apparent in his so-called ‘Neo-Pharoanic’ iconographic style. By utilizing Egyptian heritage, Awad places current political issues within the linear trajectory of Egyptian history. The ruler and the ruled, the oppressor and the oppressed; these persistent binaries are nowhere more overt and questioned than in Alaa Awad’s spectacular wall murals. 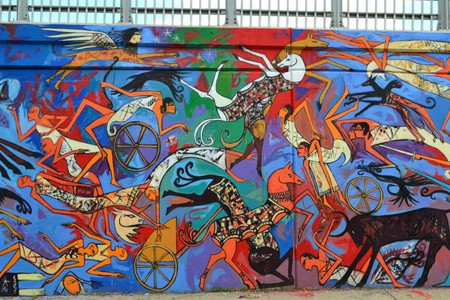 Born in Giza, Egypt in 1961, Hazem Taha Hussein has exhibited his paintings across the world, including Germany, Cuba, France, Dubai, Sweden and Egypt. His paintings are as diverse as the inspiration they are drawn from. There is no other artist who can so seamlessly bring together the iconography of American graffiti, Egyptian hieroglyphics, and Arabic text. His solo show, The Mirage at Albareh Art Gallery, Bahrain, consisted of haunting images overlaid by an Islamic grid. The images simultaneously appear transient whilst fixed solidly in a labyrinth of space.

Flight of the Half Gods | © Khaled Hafez

Khaled Hafez has been exploring the dichotomies of popular culture through the mediums of video and painting for over 20 years. Growing up in Egypt during a period of continuous political and cultural change, the transformation of what it means to be from ‘the East’ is a theme that runs through much of his art. His works depict striking juxtapositions of traditional and contemporary iconography, making pairings that intrigue and delight.

Ganzeer, or ‘bicycle chain’, is a graphic designer who has been very active In the contemporary art and design scene since 2007. He has a great distaste for existant labels and calls what he does ‘Concept Pop’. The name ‘bicycle chain’ is intended to suggest that the function of artists is to push forwards change. This is a belief that has driven much of Ganzeer’s artistic actions. Following the revolution that ousted Hosni Mubarak in 2011, Ganzeer began engaging in an ‘alternative media campaign’, distributing politically charged stickers, flyers, and questionnaires. While some have debated whether he is an activist or an artist, true consideration of his works leads to the realization that for Ganzeer, there need be no distinction. 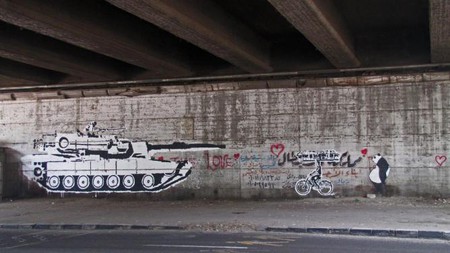 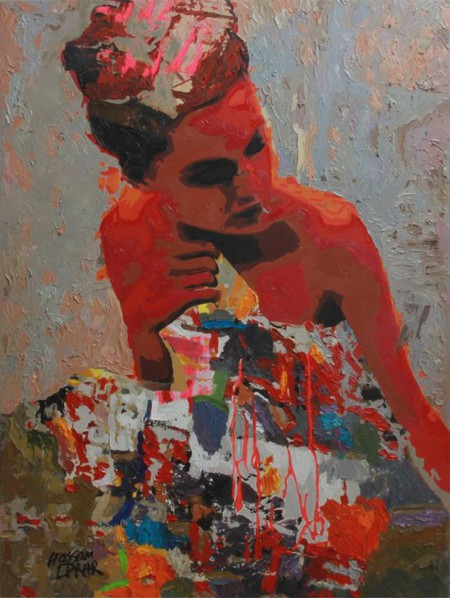 Tarek El Komi’s sculptures are imposing and haunting, with edges impossibly smooth and lines declaratively drawn. There is a clear harkening back to an Egyptian Pharaonic identity; his figures are clear suggestions of the harmonious forms of Ancient Egypt. Walking around a display of his sculptures with artfully falling light gathering up shadows behind each figures, silence is necessary, as the figures appear to demand it. Egyptian artistic heritage has developed with the times, but its integrity and resonance has not wavered. A selection of his works can be found in the Museum of Modern Egyptian Art, Cairo.

El Teneen (Arabic for ‘the Dragon) is a street artist who truly gained prominence during the 2011 Egyptian Revolution. His stencil works have been determined by many to be icons of the 25 January Revolution. Much of his work has been short-lived, as in the early days it was removed as soon as it appeared, particularly an image of Mubarak with the word ‘leave’ underneath. While perhaps not as decorative as the others in this list, El Teneen’s works are sharp and loyal to a clear message. If you are lucky enough to come across his work on the streets of Cairo you are sure to understand that the iconography of discourse has manifested as art on the street.

Emad Ibrahim’s paintings are suggestive of colours blown by wind. They are ethereal and engaging and lead you to find yourself imagining what is occurring just beyond the canvas edges. This inherent energy is born of the fact that figures appear almost unfinished, as though they could not be completed as they were still in motion when Ibrahim went to set them to paper. A selection of his works can be found in the Museum of Modern Egyptian Art, Cairo.

Mohamed El Fayoumi creates sculptures influenced by Egyptian heritage with intended cheeky undertones. By manipulating the dimensions of ‘traditional subjects’ such as the bird and the seated man, Mohamed El Fayoumi warps our expectations. The result is a whimsical smile and satirical grin where perhaps there has only been a portentous history before. His three figures entitled ‘Human Emptions’ can be found in the reception of the Fairmont Hotel in Cairo.

El Zeft’s image of Nefertiti in a gas mask has become an international icon used to convey solidarity with Egyptian women during the Egyptian uprising. El Zeft’s street art has consistently provided a visual manifestation to the feelings of oppression and the frustration felt by many Egyptians. Simultaneously they can be appreciated for their clever innuendos and beautiful use of color and shading.