The 10 Best Teahouses In Cairo, Egypt

Tea is Egypt’s national drink, and the ahwa stands at the center of Cairo’s social life. Whether the center of intellectual activity and political ferment, a site of relaxation and contemplation, or a place to meet friends, cafes and teahouses cover the entire city. It would be almost impossible to choose a definite list of the best, but here are some of the most interesting individual cafes you should visit in Cairo. 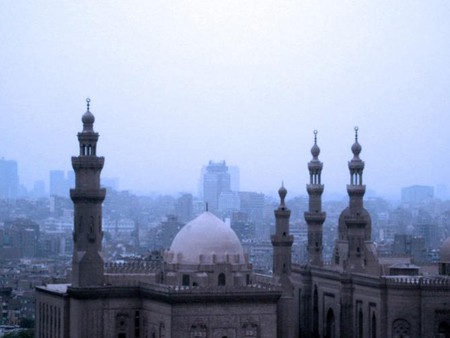 In a city full of abandoned buildings and ruins in the making, Zeinab Khatoun offers a rare chance to immense yourself in living history. Nestled behind the al-Azhar madrasa – the second-oldest university in the world, and Cairo’s oldest mosque – it sits in the courtyard of a recently restored 15th century manor house. Take in the scents of rosewater, incense and verdant trees and gaze at the elegant mashrabiyya, the projecting windows of carved wood and stained class characteristic of traditional Arab architecture. Order a pot of tea and you’ll be presented with an array of herbs and spices to add yourself. 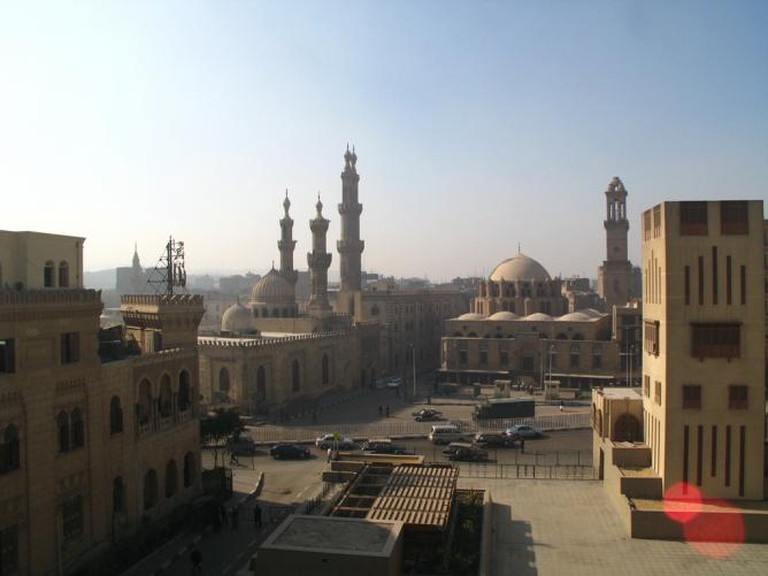 © Joonas Plaan - Islamic Cairo
Immortalized in numerous novels, stories and poems, Zahrat el-Bustan has long been the haunt of artists and intellectuals. It is also reputed to be the oldest awhain all of Cairo. Although Zahrat el-Bustan retains the atmosphere of an old-fashioned cafe, complete with old men smoking unflavored mu’asseltobacco and a pricing policy that varies from drink to drink, it also offers a rare friendly welcome to women and the young. Indeed, far from being a Les Deux Magots-style heritage piece, it has recently become the favorite spot for political radicals, who come here for Turkish coffee and shisha between protests and marches at nearby Tahrir Square.
Open In Google Maps
Cairo, Egypt
Give us feedback

The Borsa area of downtown Cairo is like nothing else in the city, a dense network of pedestrian alleyways lined with dozens of awha baladi and infused with the scents of flavored shisha. As with Zharet el-Bustan, women are permitted to attend, and there is an open atmosphere. Locals wage war on the backgammon board under palm trees, and enthusiastic street food vendors will regale you with flyers advertising their wares, which can be ordered to the cafes. Behind this bustling street life, several of the cafes conceal private beer rooms, where locals can drink alcohol together without breaking the bans on public consumption.

Cafe, Tea , European, $$$
Facebook
Email
Twitter
Pinterest
Copy link
Share
Map View
Encompassing the northern third of Gezira Island, the Zamalek district has long been one of Cairo’s most affluent areas, characterized by tranquil avenues lined with colonial villas, upmarket restaurants and cultural institutions. It is also home to many of Cairo’s finest cafes. Sufi, which combines a cafe with an Arabic and English bookshop, is one of the most beautiful. Set within a palatial old apartment, Sufi has a peaceful, homely atmosphere perfect for browsing the shelves or perusing a potential purchase. Artwork and decorations both vintage and contemporary are up for the sale. The cafe serves a wide range of tea alongside both Egyptian and European food.
Open In Google Maps
Cairo Governorate, Egypt
+20227381643
Visit Website
Visit Facebook page
Give us feedback

Cafe, Diner, Restaurant, American, $$$
Facebook
Email
Twitter
Pinterest
Copy link
Share
Map View
The tale of Groppi reads almost like a miniature history of the 20th century. From its early years as the most celebrated tearoom and chocolatier in the colonial Arab world, to its transformation into a dissident political hotbed under Nasser, Groppi’s has been everything from an exclusive restaurant to a local cafe. The original branch, located on Midan Talaat Herb, stands as a faded testament to its Belle Époque glory. The patisserie – complete with petit-fours, tarts, éclairs and more – is still among the best in town, and is now complimented by a range of Eastern confectionery. A second branch on 26th July St. faces the Hadiqat al Azbakiyah, one of Cairo’s few public gardens, and is the perfect place to feel the city’s rhythms.
Open In Google Maps
محافظة القاهرة‬, Egypt
+20223911871
Visit Website
Visit Facebook page
Give us feedback

Cafes around the Omar Effendi

The Mohandessin district, located in Cairo’s adjoining city of Giza, was developed in the 1950s as a source of cheap housing for local engineers. Now, it is a bustling extension of its neighboring city, popular with young professionals. The area around the state-owned Omar Effendi department store is full of lively street cafs full of local youths, who gather around here to socialize and watch sports. In the winter, everyone drinks hummus sham, a soup-like mixture of chickpeas, tomato, lemon and cumin not dissimilar to the Levantine dip. For something more refreshing, try sahlab, a delicious concoction of orchid flour mixed with coconut juice and sprinkled with nuts and sugar.

Although it isn’t strictly a cafe, City Drink is a Cairo institution. Renowned as the best juice shop in a city full of them, City Drink is the place to come for all sorts of fruit-based beverages. Along with a huge variety of fruit that you can mix and match to create your own cocktail, you’ll find the local favorite aseer asab, sugarcane juice. And for the hungry, there is the qunbula (‘bomb’), a gargantuan heap of fruit and ice cream surmounting sweet slices of basbousa, a semolina cake smothered in syrup. 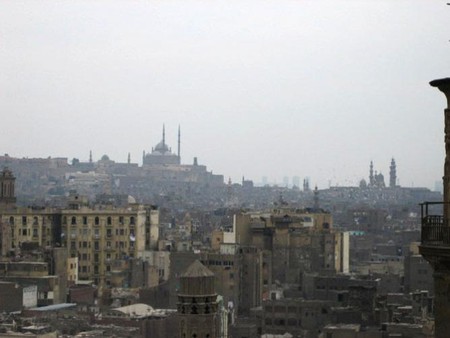 One of the best places for people watching in the whole of Downtown Cairo, Mohamed Farid Street bustles with shoppers moving between and taking breaks from the many markets in the surrounding area. It is also an enclave of Upper Egypt and the Sudan, and the ahwa are full of migrants and visitors in traditional turbans and jellabiya robes. Sit down at one of these cafes and eat some ful medames, the Saharan staple of mashed and stewed fava beans served with leaves and picked vegetables. While some of the cafes do not allow women to enter, many of them have begun to do so.

Tea Vendors on the 15th May Bridge

The bridges that cross the Nile in Cairo are sites of romance, and often the favourite place for young locals to meet for their first dates. The 15th of May Bridge, which connects Zamalek with the Giza suburb of Agouza, is perhaps the most popular. Although there are no permanent teahouses here, the stalls that line the bridge’s sides sell some of the city’s best tea. Koshary tea is sweetened with cane sugar and enlivened with mint leaves, while saiidi tea is stronger and even sweeter. The most popular herbal drink is karkadeh, an infusion of dried hibiscus served both hot and cold.

With branches in Downtown Cairo, Zamalek, Nasr City, Heliopolis and Mohandessin, Beano’s has quickly established itself as the city’s premier modern cafe chain. Alongside Turkish coffee and sahlab, they sell a wide variety of Italian espresso-based drinks, sandwiches and cakes. Try the hibiscus and blackberry smoothie for authentic Egyptian flavors, or recharge your energy with a potent ristretto shot. They’re also among Cairo’s most reliable spots for free Wi-Fi, making them perfect places for visitors to catch-up on the Internet over lunch.