Where to Witness the Most Incredible Animal Migrations in the World 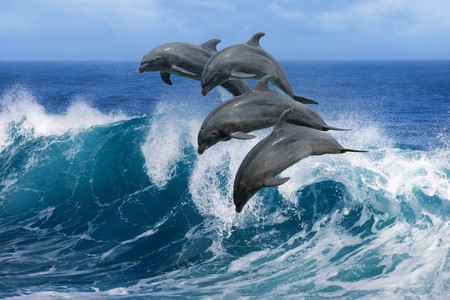 Our planet is a pretty magical place, and every day, extraordinary things are happening, especially in the animal kingdom. At very specific times of the year, certain animals gather and move in mind-boggling numbers to special places, in order to feed, breed, give birth, raise young, or escape the cold. Some migrations are so predictable, or so large, that we humans have a unique opportunity to plan a trip to witness them. These are some of those migrations, and some of those special places.

Between late May and early June, millions upon millions of fireflies gather in the Great Smoky Mountain National Park in the ghost town of Elkmont. This is the largest synchronized gathering of fireflies in the world. It is a light show that is best viewed up front and center. Taking a camping trip to this beautiful national park at the right time of year is an experience that will light up your world. 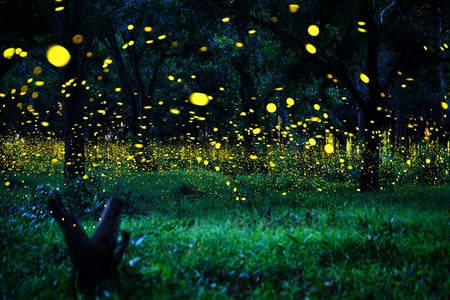 Light up your soul | © WUT.ANUNAI / Shutterstock

The Arctic National Wildlife Refuge is home to the Porcupine Herd, which consists of around 152,000 caribou, and the Central Arctic Herd, which is made up of around 23,400 caribou. Caribou are constantly on the move. Through the year, enormous aggregations can be spotted in this incredible reserve. Between mid-May and the first few weeks of June, the females migrate to the North Slope, which is covered in wildflowers and is where they will give birth. The males follow shortly after. Grizzly bears, wolves, and golden eagles tend to accompany this mass gathering and calving, too. 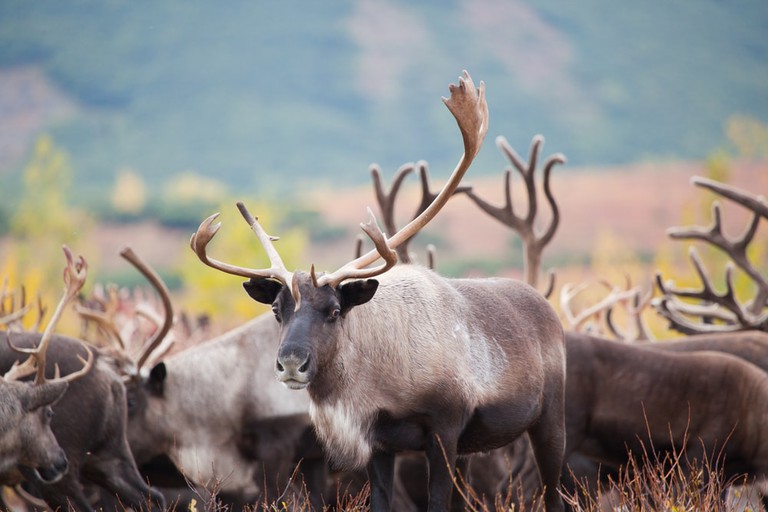 During the northern hemisphere winter months, some of the largest congregations of narwhals gather in Baffin Bay in Greenland to feed. While narwhals are quite unpredictable and seeing them in the wild is a treat few will ever experience, your best chances are definitely in Greenland in the winter. While it is estimated that only about 80,000 narwhals remain in the wild, a large portion of that number can be found here. 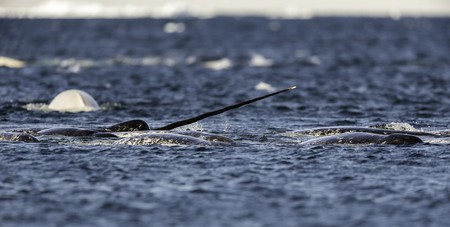 The unicorns of the sea actually have tusks, and not horns | © wildestanimal / Shutterstock

During the winter, October through February, monarch butterflies that live on the eastern side of the United States migrate south to Mexico to escape the winter. They spend the chilly months in oyamel fir trees in the Monarch Butterfly Biosphere Reserve in Angangueo, Mexico. If the monarch butterflies are from west of the Rocky Mountains, they winter in and around Pismo Beach Monarch Grove in California, in eucalyptus trees. Somehow, this mammoth migration of butterflies manages to fly to, and hibernate in, the exact same trees as the kaleidoscope before them (that’s what a group of butterflies is called). 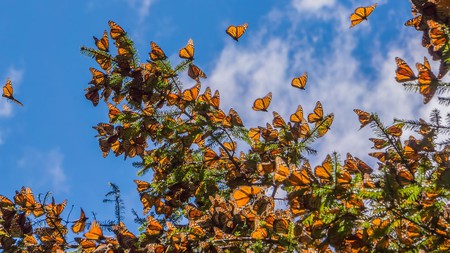 In the blistering summer, June through September, populous pods of whale sharks gather off the coast of the Yucatán Peninsula near Isla Holbox for a zooplankton feast. The whale sharks share these rich seasonal feeding grounds with dolphins, rays, and large game fish such as tuna. In special years, super-pods of whale sharks gather a bit further southeast, closer to Isla Muejers and Isla Contoy. This rare gathering is called an afuera, and in 2009 it was reported that over 420 whale sharks were spotted in close proximity to one another. 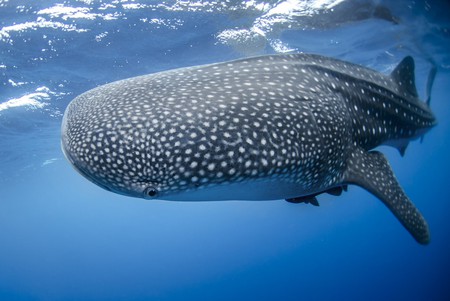 The Tortuguero National Park on the northern Caribbean coast of Costa Rica is one of the most important green-turtle nesting beaches in the Western Hemisphere. The Tortuguero National Park was established in 1970 and since then has worked tirelessly to protect this endangered species, as well as the hawksbill, leatherback, and loggerhead sea turtles that also use these beaches for nesting throughout the year. Between July and mid-October, the turtles return to Tortuguero to nest. August and September are the peak months and that’s when you will have the best chance of seeing large numbers of them. 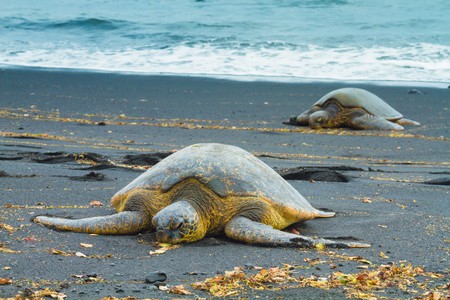 Christmas Island is home to 14 different species of land crab, including the vibrant red crab. It has been estimated that between 40 and 50 million red crabs live on Christmas Island. Outside of spawning, when they congregate and move in impassable floods, they are usually spread out and tucked into the shady areas of the island. The breeding migration starts in the wet season after a good rain, usually in November or December. The migration down to the sea to spawn has to take place before sunrise, during a spring tide, in the last quarter of the moon, and the mass move takes place before the spawning date. 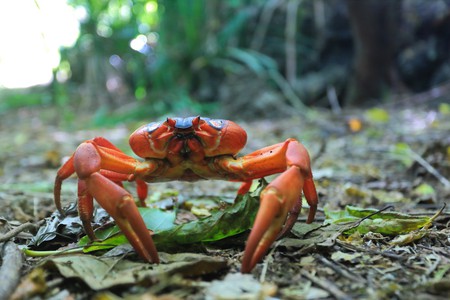 One of millions | © KiltedArab / Shutterstock

A murmuration of starlings is a mesmerising natural phenomenon that typically takes place in the fall, with the best month usually being November. Hundreds of thousands of starlings take to the sky at dusk to perform seemingly choreographed dances. The flock moves in a tight-knit formation; there are so many birds that the mass appears to be moving as a single entity. This arial avian performance can be witnessed in Ham Wall, Somerset; Aberystwyth Pier, Wales; Brighton Pier, Sussex; Leighton Moss, Lancashire; and Fen Drayton, Cambridgeshire, as well as at many other sites around the country. 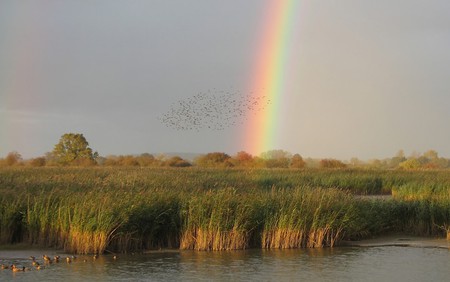 A small dance before the grand ball | © Danny Chapman / Flickr

In November, many of the trees in the Kasanka National Park burst with fruit, and this mass fruiting attracts a mass migration of straw-colored fruit bats from all around the tropical belt of Africa. Around eight million fruit bats flock to this special area for a fruit extravaganza. The size of the temporary fruit bat colony that fills this forested area in Zambia makes this the largest mammal migration in Africa. The fruit bats are responsible for around 60% of Africa’s rainforest seed dispersal. 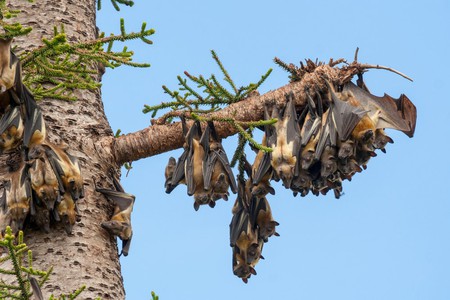 Between April and June, hundreds of thousands, and sometimes even millions, of flamingos flock to Lake Nakuru. This particular lake is a soda lake, which means it has a very high alkalinity, and flamingos thrive in this saline environment. This pink spectacle is one of the most impressive avian gatherings on the planet. An immense flamboyance of flamingos can also be found in Lake Bogoria. The Lake Nakuru National Park acts as a safe haven for rhinos, gazelles, baboons, lions, and leopards, too. 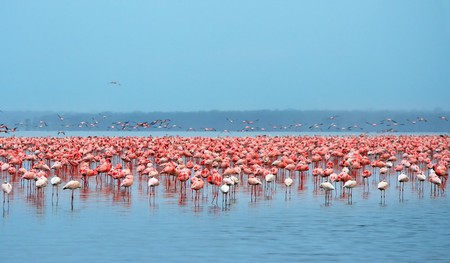 Every year, more than two million wildebeest and zebra trek from the Serengeti in Tanzania to the Masai Mara in Kenya. While these grazers are always on the move in search of fresh grass, from July they start to cross the border from Tanzania to Kenya. One of the biggest and most dramatic spectacles is the Mara River crossing, which usually starts in August. The hunger-driven wildebeest and zebra must cross the crocodile-infested river to reach new grazing grounds; the crocodiles, of course, anticipate their arrival. 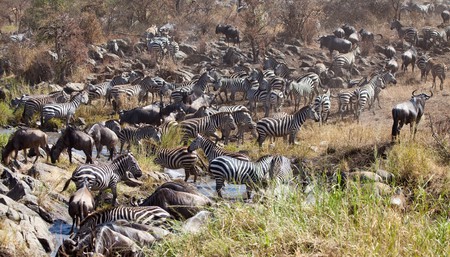 Where are the world’s most incredible desert landscapes?