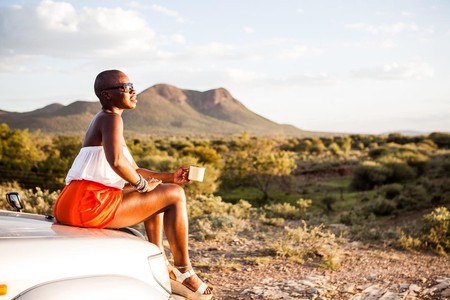 Travelling since the age of six, the Detroit native of Ugandan descent had already ticked eight countries off her list by the time she turned 18. Now Nabongo pursues her passion full time, with plans to hit her last country on her 35th birthday on May 15, 2019. Coining her adventure ‘the catch me if you can’, she launched a GoFundMe page, started an Instagram and, over time, began collaborating with brands to sponsor various aspects of her trip. 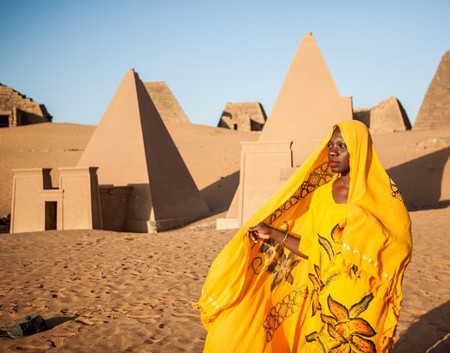 However, Nabongo’s mission extends beyond simply setting a record. Speaking with Culture Trip, the globally minded Renaissance woman explains why she decided to pack up and hit the road, and all that she hopes to achieve from her journey.

‘When I left the UN, I had been living abroad for seven years,’ Nabongo tells us. ‘I moved back to the US and started working for a consulting firm. It was my first time working in an American office space and I just hated it.’ 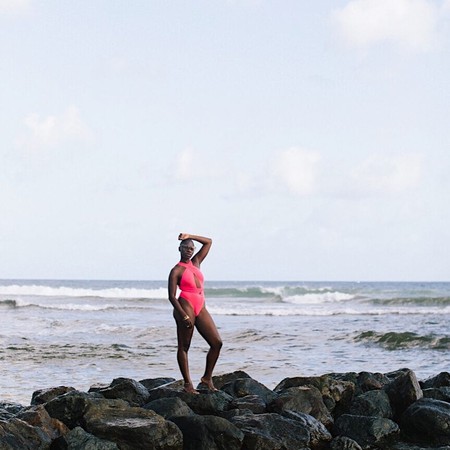 So Nabongo quit her job in Washington D.C. and launched Jet Black, a boutique travel agency that works with individual governments and brands to promote tourism to the African diaspora.

‘I studied development. I have travelled. I see that charity isn’t what is going to change the lives of poor people in other countries. Small and medium enterprise will do that,’ Nabongo explains. ‘It’s about bringing more money into the economy, and that’s what I push for with Jet Black.’

Nabongo hops back to the US whenever she can to see family and friends. Yet, despite her American passport, it is Nabongo’s own country that makes her feel the most unwelcome. 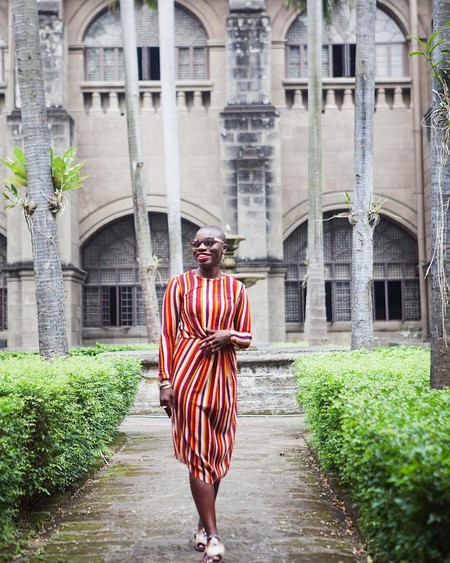 The entrepreneur recounts one especially terrifying return home: ‘I had just come off a flight and there was a US military officer standing right by the airplane doors. He asked me if he could see my passport. Being steps away from having to show the document to immigration, I said no twice. Then he put his finger on the trigger of his military-grade weapon and asked a third time. Obviously, I handed it over. He gave it straight back to me when he saw I was American.’

This experience occurred just weeks after the events of December 2009, when Umar Farouk Abdulmutallab attempted to detonate a bomb on a Northwest Airlines flight from Detroit to Amsterdam. Abdulmutallab was Nigerian. Nabongo was flying the same route, and feels this is why she was targeted.

But December 2009 is not the only time Nabongo has felt racially profiled. ‘The first time it happened was when I moved to Japan,’ she tells us. ‘And it’s because that’s when I shaved my head. With one haircut, the way the world saw me changed and that changed my life.’ 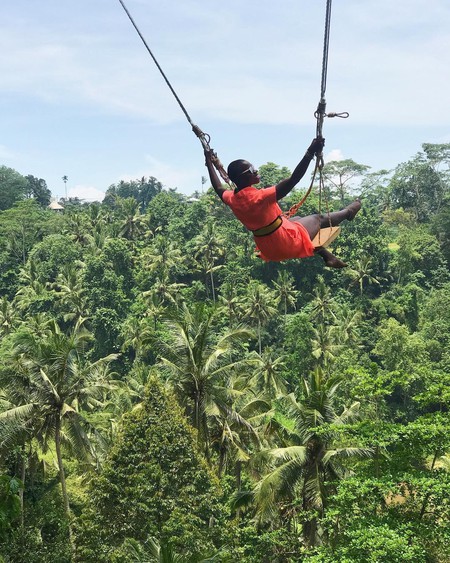 Still, Nabongo insists that the majority of countries are very welcoming, and she is often surprised by the kindness of strangers.

One such example was on her trip to Nigeria. ‘It’s a crazy story actually,’ Nabongo says. ‘I dropped my phone in an outdoor parking lot [in Lagos] and I got it back two hours later… can you believe it? I got my phone back from a man who was so poor he didn’t even have a phone of his own. He asked for nothing in return, but of course I did everything in my power to help him.’

That is one of the main takeaways that Nabongo wants people to pick up from her experience, that the bulk of the people in the world are decent human beings.

‘Everywhere in the world, all of these bad things are happening but most people are still good,’ she says. ‘And this is despite the fact that the world is so unequal. One person somewhere can go drop $10,000 in a strip club and another can’t even afford to eat. That’s the world in which we live and yet decency does prevail.’ 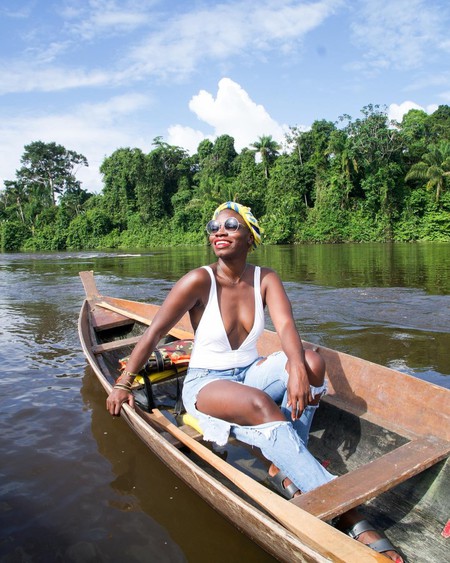 Much of the press Nabongo has received states that her main intention with ‘the catch me if you can’ project is to inspire people to travel, but she is adamant that this is not the case. ‘Going to every country in the world is actually a really ridiculous feat. It’s exhausting, it’s expensive. What I’m trying to do is inspire people to dream bigger,’ she says.

‘What do you want to do?’ Nabongo asks. ‘Figure it out out and then do that. Dream as big as possible and create the life you want to live. You don’t need the 9-5, the big house or the car if you don’t want it. I don’t have any of that! I have figured out what makes me happy and I chase it on a regular basis. This journey is about me showing other people they can do the same. They can be more present. They can get off auto-pilot. Everything is a choice.’

When Culture Trip speaks to Nabongo, she is in her hotel room in Dominica, her 112th country. She is suffering from a painful ear infection, which has forced her to cancel plans to receive an open-water-diving certification in her next country, Saint Vincent. Nabongo is annoyed, but takes it as a sign from the universe that she needs to learn to be more flexible. She will open-water dive some other time. 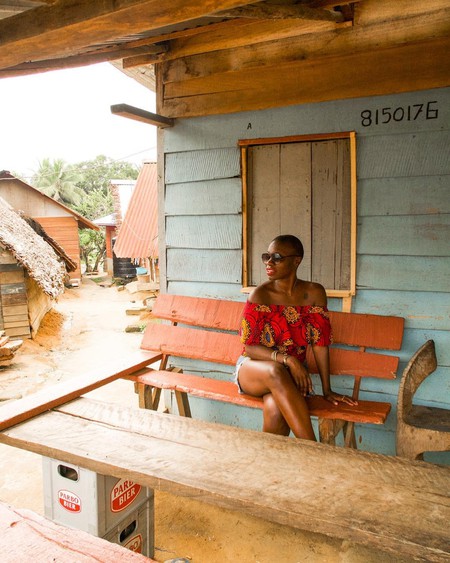 As her odyssey winds into its final year, Nabongo looks to the future with yet another lofty goal in mind: ‘So much about this journey is expanding my platform so I can share my experiences and thoughts with the wider world. I’m anti extreme-capitalism and I want to share that and explain why. Travelling has also turned me into an environmentalist. I now want to champion an anti-plastic movement.’

As with everything Nabongo does, there is always a greater purpose to fulfil. When she visits Africa on holiday and is surrounded by extreme poverty, she launches a business directly aiming to combat it. When she is angered by what she sees going on in Gaza, she takes to social media and makes a stand. And when she sees litter on the beaches of Senegal, she wages a war with plastic. Each task leads her forward to the next.

Once you speak to Nabongo, you can begin to understand why the motto ‘catch me if you can’ is made for her: this woman will not stop moving, and the rest of the world will just have to keep up!

Jessica has now completed her trip. To read her story, click here