The 10 Most Beautiful Towns In Venezuela

Caracas, Venezuela's capital city | © Schiskin/WikiCommons
Traveling in Venezuela is not for the faint of heart. Visitors need to be smart about their travel plans, and aware of their surroundings. But for those with the courage to try, there will be great rewards. Expect cities full of history and culture, and a natural world with unparalleled beauties. Discover the most beautiful towns in Venezuela.

Founded in 1552, Barquisimeto is the fourth largest city in Venezuela, and one of the country’s oldest. The city sits on the edge of the Turbio River and has a moderate and pleasant climate. Along with old, Spanish-style buildings, newer modern and experimental designs have become a part of this city’s skyline. The highlight is the Barquisimeto Cathedral, which was completed in 1968. However over the years, a mix of architectural styles have made this city’s landscape unique and endlessly interesting. Barquisimeto is also said to have some of the most beautiful sunsets in the country. So find a romantic spot and enjoy the view. 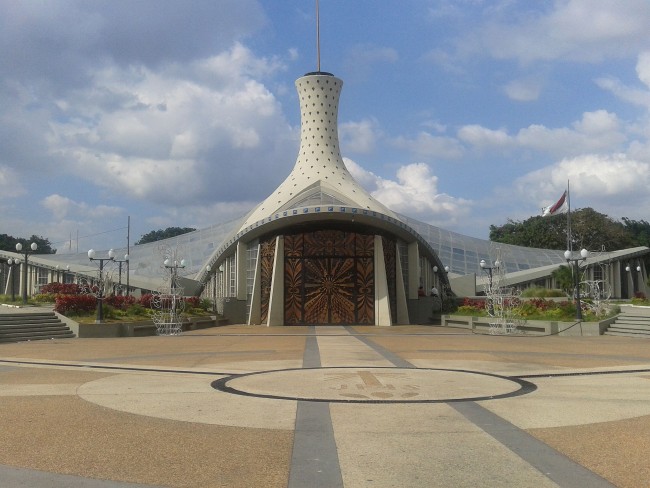 Canaima is a tiny city, if you can even call it that. Located inside the UNESCO World Heritage site, Canaima National Park, the village mainly serves as an outpost for adventure seekers. From here, visitors can start out on their own hiking or backpacking trip, or hire a tour guide to help them navigate the huge national park. Undoubtedly, the most famous site is the breathtaking Angel Falls: the tallest waterfall in the world. But before you head out for your grand adventure, take in the sights immediately around Canaima. The Carrao river gently curves into the village, with the Laguna de Canaima forming at the base of a handful of small waterfalls. All of this is easily viewable from many of the lodges and camping spots in the town.

Caracas is the capital of Venezuela and is a bustling metropolitan city. It has had some unfortunate bad publicity due to rising crime rates, but don’t let that scare you. With solid research and some savvy street smarts, the city can be safely visited. Even hiring a touring company and going as part of a group may be a good idea. Safety in numbers. But for those willing to look past the potential risks, Caracas is a wealth of history, art, and culture. Geographically, the city rests at the base of a majestic mountain range that sets a stunning backdrop. The Avila mountains are an excellent hiking destination for those wanting to get a bird’s-eye view of the city. For travelers looking for a city experience, there are numerous museums, historical sites, restaurants, and even a zoo.

The Caribbean Sea is said to be one of the most beautiful in the entire world. Tourists flock to its many islands for holidays and relaxation. Venezuela’s Carupano city is situated in the far north of the country, right on the water. This makes for access to amazing beaches and unbelievable vistas. The city itself is moderately sized, with under 150,000 people. Historically, Carupano’s port was important for the exportation of coffee and cocoa products. If you’re planning a trip, the best time of the year may be the month of February. The temperature will be perfect, and Carupano has one of the best Carnival celebrations in the country. So book a ticket and party in the sun.

Another UNESCO World Heritage site on this list, Coro was actually once the capital of Venezuela. What makes this town really beautiful is the architecture that has been preserved since its colonial days. Brightly colored buildings with high detailing feature an Andalusian Spanish style. Many of these buildings are churches or other mission buildings and can be toured or visited by the public. Immediately north of the city, the Paraguana Peninsula is connected by the Medanos Isthmus – a small strip of land that has such an unique geography that smooth sand dunes have formed. The area is the only desert in the entire country, and the dunes can easily be seen from the road driving out of Coro. 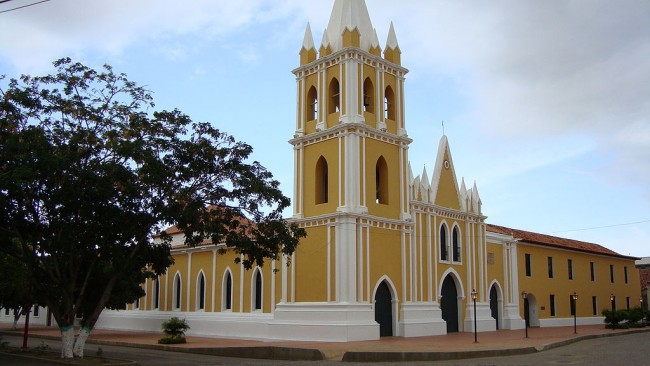 Remarkably different than Venezuela’s coastal cities, Ciudad Bolivar is nestled farther inland, right next to the Orinoco River. At this point, the river is about a mile wide and very gentle and has been a valuable resource for the town for hundreds of years. The city is in the region that first won freedom from Spanish possession and has been especially well preserved over the years. Museums, architecture, and cobblestone streets all remain to tell the stories of Ciudad Bolivar’s past. One of the best places in the town to visit is the Plaza Bolivar – a public space in the heart of the old part of the city, surrounded by beautiful buildings and statues of important figures in history. 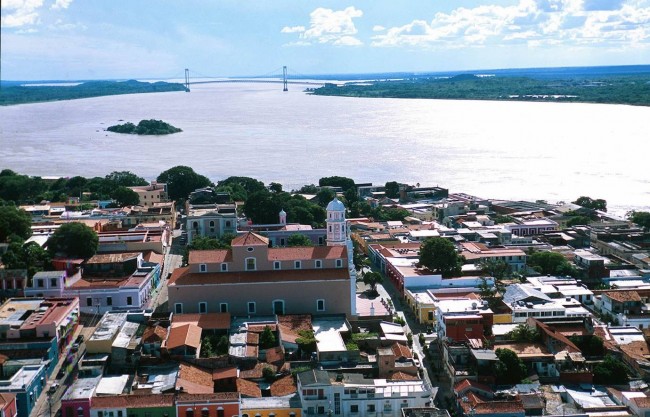 Maracaibo is located in northwestern Venezuela, overlooking the straight that connects Lake Maracaibo with the Gulf of Venezuela. It was once a relatively small town, but a century ago, oil was discovered in the strait, and the city quickly grew in affluence. Today, Maracaibo shows a blend of old architecture that reflects the colonial history of the region and new buildings, built in the wake of the petroleum boom. The wealth that has been found in the city has contributed to a strong music scene, great shopping, and extensive public parks. Verda del Lago is a huge park that is popular with joggers and cyclists and offers panoramic views of the lake, and the bridge over it, which is the largest concrete bridge in the world.

Tucked between two large national forests in the Andes Mountains, Merida is a mountain town soaring at over 5,000 feet above sea level. One of the city’s main economic resources is the tourism industry, with many visitors coming for serious mountain climbing and for recreational hiking in the Andes. One of the most beautiful views that the city offers can be seen by taking a cable car, the world’s highest and longest in fact, to Pico Espejo. The point is well over 15,000 feet above sea level and has a large statue of the Virgin of the Snow, which stands to protect the mountains around. The ride up to the point may not be for those with height anxiety, but those who make it to the top will surely be rewarded. 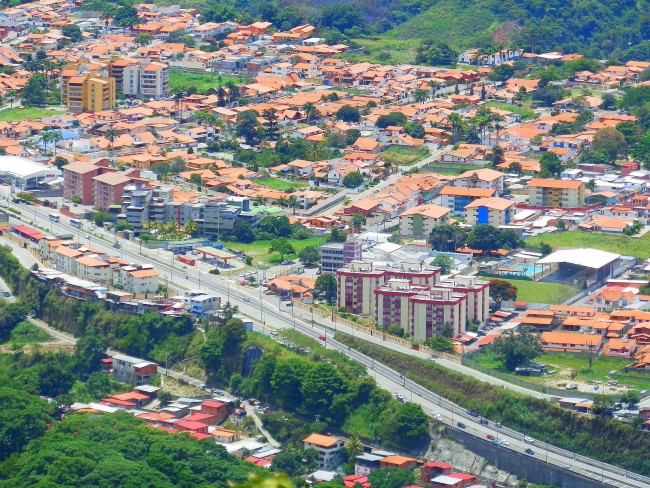 The City of Merida | © George Miquilena/WikiCommons

Porlamar sits on the Margarita Island in the Caribbean Sea. Since its discovery by explorers in the 15th century, the island has been known for its abundance of pearls, which is still a part of the economy today. Porlamar is the center of the island’s pearl industry, and of the travel industry, which has seen a rapid increase over the last 40 years. Tourists flock to the beaches for sunbathing and the water for sailing and watersports. With palm trees swaying and white sands, this island is a Caribbean paradise. The city itself also has excellent architecture and historical sites, plus a laid-back, beachy vibe.

West of Caracas, Valencia is one of the largest cities in the country and is a center for business and manufacturing. The city is surrounded by mountains, except for its east side which looks over Lake Valencia. Valencia has several important landmarks and museums, including the Museum of History and Anthropology that houses artifacts from the indigenous people that inhabited the area before colonization. Along with numerous monuments and statues, the city also has over half a dozen extensive public parks for sports and outdoor recreation. With tropical trees and green everywhere, even a city this size seems like it could just be swallowed up by the lush Venezuelan mountains. 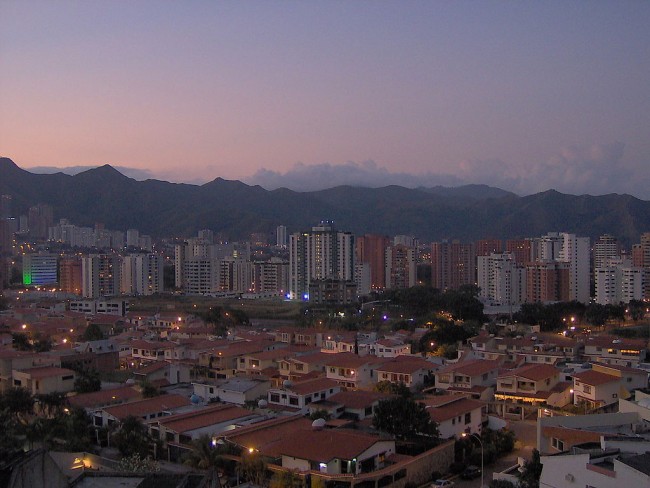