Considered the most talented young conductor of the 21st century, the leader of the L.A. Philharmonic Orchestra, Gustavo Dudamel, is an inspiration to a whole community of young Venezuelans. 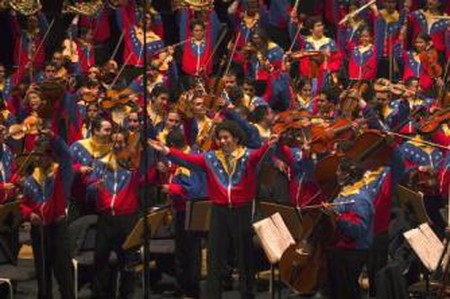 Dudamel was born in Barquisimeto, a poor community in Venezuela, in 1981. His father played the trombone in a salsa band but, as Gustavo had short arms, he chose the violin as his instrument, which he started to play at the age of four in ‘El Sistema’ (The System), a youth program in Venezuela which teaches impoverished children how to play an instrument, which transformed his passion for music into a way of life. He started his conducting studies in 1996, first with Rodolfo Saglimbeni, and later with José Antonio Abreu, becoming one of his great protégées. Dudamel and Abreu still have a close relation as he considers Abreu his mentor. At the age of 18, he was named conductor of Venezuela’s National Youth Orchestra, and become popular for his ensemble compositions. He was also designated concertmaster of the former Simón Bolívar Youth Orchestra. That orchestra, which contains musicians from 18 to 28 years old, has toured the world under Dudamel’s leadership and has made a number of recordings on Deutsche Grammophon.
The Simón Bolívar Youth Orchestra is also the result of El Sistema, which is also known as the Venezuelan Youth Orchestra System, Venezuela’s program of social uplift through classical music. Founded by Abreu in 1975, El Sistema is not a traditional music program but an artistic project of social assistance. In a country where poverty often leads youth to violence, drugs and gangs, music is offered as an alternative, taking the kids from the streets and encouraging them to awaken their own talents. With El Sistema, youth can find a place to develop their talent and create. This program, made up of nearly 300 music schools for children, or núcleos, has spread even to the Venezuelan Amazon, an area reachable only by boat. The program embraces all children interested in learning music, including the ones with special needs. Most of them come from the poorest communities, but núcleos also attract upper-class kids who want a musical education. El Sistema encourages the great passion that Venezuela has for classical music and has become one of the country’s symbols.The documentary films The Promise of Music and To Play and To Fight depicts the story of this project and how this orchestra system has produced some of the most renowned musicians in the world including Dudamel and the Berlin philharmonic’s youngest player Edicson Ruiz.
Gustavo Dudamel has won many awards, becoming one of the most decorated conductors of his generation. In 2011, for example, he was named Gramophone Artist of the Year, and in 2012 he won the Grammy award for directing the 4th Symphony of Brahms, performed by the L.A. Philharmonic. But in spite all those achievements, he still remembers how he arrived at his success, and the secret, he says, is passion and discipline. Those are the concepts that he tries to transmit to his orchestra when they are rehearsing. A good conductor has to know what he wants from the orchestra and how to get it. Dudamel’s method is not intellectual but emotional, he talks about music in terms of feelings, so musicians can understand what they are expected to transmit to the audience with each symphony. Deborah Borda, the President of the Los Angeles Philharmonic, said that ‘Gustavo has the ability to communicate what is passionate and vital about music in a very 21th century way’. Currently, Dudamel is the Music Conductor of the Los Angeles Philharmonic and the Gothenburg Symphony Orchestra. He also guest conducts with a few of the world’s greatest orchestras each season.

Watch a trailer for The Promise of Music below: