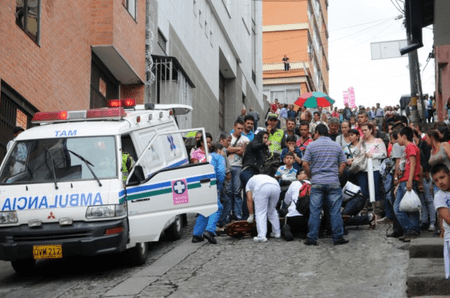 A young woman is swept up in the immediate moments following her mother’s demise in the Paraguayan selection from our Global Anthology.

When my brother Palo answered the phone, I already knew. Like a vivid dream, I could sense the subtle click of the receiver, and the creak of the wood under the weight of his shuffling feet, as he ascended the staircase to tell me, in a hoarse voice, the expected news.

In silence, I observed thick tears running past his thrice fractured nose—once while playing football; another from a fight; the third I do not remember, maybe I broke it. He asked me to accompany him back down. I pursed my lips and, after reading the first few lines of a story I was writing, jotted down a couple more sentences before closing my Moleskine notebook and letting myself be taken under his arm.

The hurried steps of my father gave everything a sense of muted equanimity. In fact, I wanted to remember everything as it was happening. In my notebook, I recorded my observations, giving everything my full attention, so as not to forget any detail—the cat asking for milk, a radio broadcasting a sports game, and the slaps from my father, trying to snap me out of it.

I wrote that I thought I would burst into tears, then crossing that out, I told myself: “Hold on. Don’t cry.” I opened the notebook to where I left the story (I had marked my place with a pencil), and wrote another paragraph inspired by what was happening: my father anxiously pacing and raising his arms, while the slim countenance of serenity peeked beyond the front door.

Palo shouted that this was not time to be fooling around, that our mother was dead, and here I was writing down fantasies. I noted this, adding the word “stupid” to “fantasy,” then I shut my notebook.

And though I had crossed them out, the tears came. Of course they did, literature isn’t written with numbers and equations. I lied and told my brother that I had been searching for a telephone number. Our father, meanwhile, had given Palo the keys to our car—our father would not and did not go. I deleted that part of the story because, otherwise, what would happen later would not have come to pass.

I do not know how we got to the car, but in next paragraph—I’m already at a new paragraph, which I know, because to save paper I always write in a numeral in lieu of a line break—I was in the passenger’s seat as the car was being driven. My parents never paid for me to take driving classes, because my mind was always elsewhere. I would always have my notebook open, jotting something down, because if I stopped writing…oh, what a horror it would be if I stopped writing! It was better not to have such distractions; I wanted instead to anticipate everything with a pen, to write down whatever I observed. It would have been fatal to let anything go unrecorded.

We arrived to find a policeman guarding the scene of the accident. When Palo tried push his way past him, the policeman socked my brother in the nose. I must admit that I added this bit, because I was no longer ashamed of his accusations, and because I wanted to give him a fourth jab to his nose. A little revenge for making me feel “stupid.”

Then I saw my mother’s body on the hard asphalt, blood pooled beneath it, dampening her clothes. Her eyes were open, her mouth was contorted to her side in a macabre grimace, her legs formed odd angles as did her outstretched arms. It was a simultaneously dull and comical spectacle, just as I described it in my notebook; it would have otherwise been a cliché if her body had been covered by a sheet.

She had been fatally struck by motorcycle. It was always a fucking motorcycle that caused the worst accidents. Then I struck the word “fuck” because my mother didn’t like me using it… bah, well, if Mom was dead, I could write the word “fuck,” smaller maybe, but readable. I do not know why I had wanted it to be so legible—no one else was going to read this.

My mother, killed by a motorcycle. If she were alive my mother would have complained about her death, not because her life was over, but because it was brought to an end by motorcyclists. Yet my mother was no longer alive to complain as “wearily” as she often did. I changed “wearily” to a synonym that was not an adverb ending in “ly.” I hate adverbs. They’re so boring.

How ironic that the motorcyclists, the ones who caused this accident, survived without injury. They were pale though, oh yes, very pale, as if they were corpses, but it was Mom who was dead, not them—the least they could do was lose their color. Witnesses reported that they had tried to flee, but were prevented from doing so by a bus driver. I jotted down the line number “232,” which went to the university. As I read over what I’d just written, of Palo clutching our mother’s body (the police had been informed that this was the son of the deceased), the coroner appeared and covered my mother’s corpse with a plain, white cloth; not celestial or turquoise, colors she would’ve preferred.

A motorcycle…I had always told my mother to run over motorcyclists, that these were people seeking death, and who passed me by shouting loudly “dyke!” or “freak!” And now these people had taken her life. I knew I had been right to mistrust them, but I didn’t know why they killed her. She couldn’t tell me. She would never be able to.

As I came to the end of what I had written down (which was still unfinished), I dropped and broke the tip of my burgundy 2B Stabilo pencil. I immediately faced the prospect of not being able to write anything down. I needed a pencil, quickly. A pen wouldn’t do, it was a pencil’s tip that I needed. My mother had always told me, “if you write with a pen, you can’t erase yourself.” I never listened to her, and now it does not matter, because the death of my mother has happened and I am without a pencil to document it.

There is no destiny in falsehood. I do not believe you can live a lie. Every person follows their own path, don’t you see that this is why I am writing all of this down? Nel would’ve been proud of me, of preserving these stories and ideas. Lafu, too, had always wanted me to think absurdly, wildly. Again, I have fallen back into adverbs, and I have no way of crossing them out. It would be impossible, not only do I lack a sharpened pencil, but I haven’t even written these words down in the first place—they’re just passing through my head.

Where could I find a pencil? It was Sunday night and no bookshops were open, nor did I have my wallet. While a reporter took down what the testimonies of the excited witnesses, I snatched a ballpoint pen stamped with the logo of a famous hotel. Now I was writing in cursive, rushing to pick up where I left off, because I could not keep up with the reality of what was happening, I couldn’t make that reality my own. Time would grow stagnant. Is it “dab” or “dap?” “Dab.” I “dabbed” my tears and wrote down what had happened as I saw it, my mother was dead—no, that was no good, Mom would be so hurt if she knew I killed her with my own words. So I gave the story an unexpected ending—Palo still holding her corpse, the guilty motorcyclists being taken into custody, the ambulance opening and shutting its doors, a lot of curious bystanders taking pictures with their cell phones, my mother’s car on its side showing the world its wheels and axles, and I staring at my notebook, with the rain devouring us all like piranhas.

Translated by Emes Bea and published courtesy of the author. Read our interview with Mia Castagnino here.