10 Things You Didn't Know About Guyana 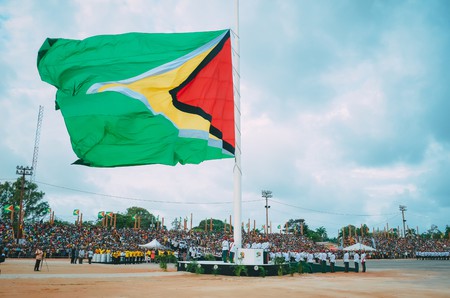 A hidden gem in a predominantly Spanish-speaking continent, Guyana embodies centuries of several cultures that have seamlessly blended to create a truly unique nation. From the colors of the national flag to the cuisine, Guyana is more culturally Caribbean than South American. We profile 10 things you may not know about Guyana.

Guyana is the Land of Many Water(falls)

Known as the ‘land of many waters,’ the world’s widest and longest single-drop waterfall is located on Guyana’s Potaro River in the Kaieteur National Park. According to a Patamona Indian legend, Kaieteur Falls was named for ‘Kai’ a chief who saved his people by paddling over the falls as a self-sacrifice to Makonaima, the great spirit. At 226 meters (741 feet), the water flows over a series of steep cascades that bring the total height of the falls to 251 meters (822 feet) when included. Four times higher than Niagara Falls, Kaieteur is among the most powerful waterfalls in the world, with a rare combination of height and water volume that has an average flow rate of 663 cubic meters per second (23,400 cubic feet per second). 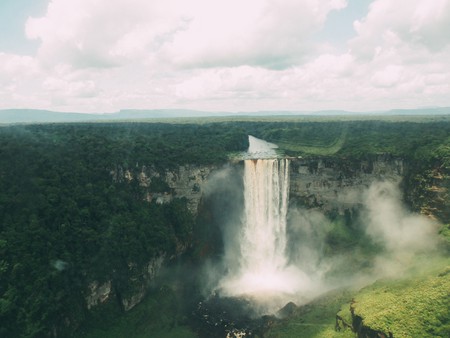 Home to a Blend of Cultures

A country comprised of six ethnic groups, several religions, diversified colonization, and influences from mainland South America and the Caribbean, Guyana is a nation of rich culture. A vast majority of Guyana’s historic architecture is reflective of the country’s British colonial past. St. George’s Cathedral, an Anglican church in Georgetown, was once the tallest wooden church in the world, at 43.5 meters (143 feet). It was designed by Sir Arthur Blomfield and opened on August 24, 1892. Guyanese cuisine is also unique; the food embodies the ethnic makeup of the country and its colonial history, which includes an array of Amerindian, European, African, East Indian, Portuguese and Chinese dishes. ‘Seven curry’ is a popular dish that is the most important ritual food for Hindu social and religious functions. The seven curry is served with rice or roti and includes mashed pumpkin cooked with curry powder and brown sugar, Khattahar, channa aloo (chickpeas and potatoes), curried mangoes, bora and dhal. 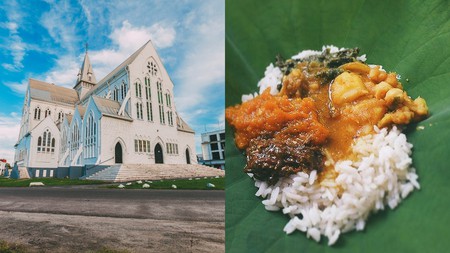 Guyana has gained fame for her noteworthy cricketers: Rohan Kanhai, Clive Lloyd, Alvin Kallicharran and Shivnarine Chandarpaul, among others. A bat and ball sport played between two teams of 11 players each on a field with a 22-yard long pitch, Guyanese cricketers constitute part of the West Indies cricket team. During the mid-1970s to the early 1990s, the West Indies or ‘Windies’ team was the strongest in the world in both Test and One Day International cricket. As of March 2016, the Windies team is ranked eighth in Tests, ninth in ODIs and second in T20Is by the International Cricket Council. A popular sport played by most Commonwealth countries, cricket is quite a thrilling sport that’s fairly easy to understand after watching just one game. Give it a try if you haven’t already! 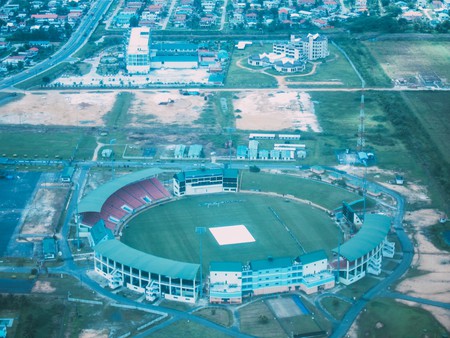 Guyana is Covered in Virgin Rainforest

Almost 80 percent of Guyana is covered in pristine, untouched rainforest. Norway and Guyana signed an agreement to protect Guyana’s Amazon as part of the country’s Low Carbon Development Strategy (LCDS). The commitment ended in 2015, with Norway having paid Guyana $250M to avoid deforestation. This first of its kind partnership has paved the way for similar LCDS and non-deforestation programs between developed and developing countries. Fun fact: the mountain from the Disney movie Up was inspired by Mount Roraima, the highest peak of the tepui plateau in South America where the borders of Venezuela, Brazil and Guyana meet. Composed of Precambrian rocks, this tabletop mountain houses several waterfalls with Venezuela’s Angel Falls being the highest uninterrupted waterfall with a height of 979 meters (3,212 feet). 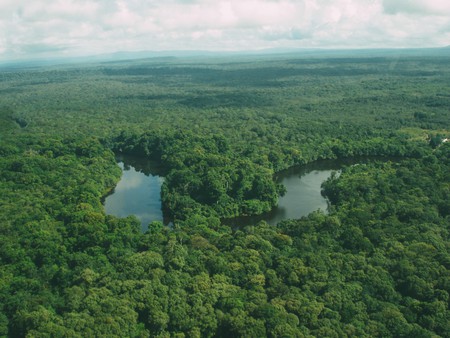 Geographically, Guyana is divided into four regions: the coastal plain, hilly sand and clay region, interior highlands, and the Rupununi Savannah. The majority of the population resides within the coastal plain, which ranges from 28 to 77 kilometers wide and extends from the Corentyne River in the east to the Venezuelan border in the northwest. The largest of the four geographical regions is the interior highlands. This region covers two-thirds of the country and embodies four major mountain ranges: the Imataka in the northwest, the Parkaraima in the west, the Kanuku in the southeast, and the Akarai in the south. The hilly, sand and clay belt is an expanse of white and brown sands covered in scrubs and hardwood forests with hills rising to 400 feet. Bauxite, an aluminum ore, is mined within this region. The Rupununi Savannah is almost 6,000 square miles, with the Kanuku Mountains being the most biologically diverse region within the country, with over 250 species of bird life. It is also home to the jaguar and the Harpy Eagle, an extremely rare and endangered species and the world’s most powerful bird of prey. 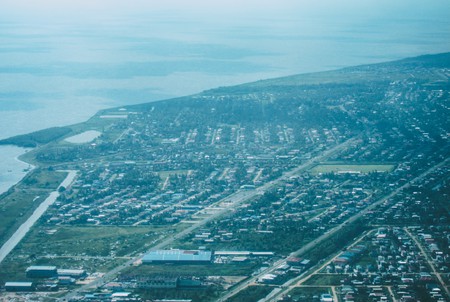 As a country nestled close to the equator, agriculture, fishing, and mining are Guyana’s most important economic activities, with sugar, rice and gold production accounting for 70 to 75 percent of export earnings. The Guyana Sugar Corporation (Guysuco) employs more people than any other industry and is responsible for 20 percent of the country’s annual revenue. Almost 85 percent of Guyana’s production is exported to the European Economic Community (EEC). With one of the lowest GDPs in the western hemisphere, Guyana overhauled the tax code and implemented value-added tax (VAT) in 2007. Since then, the significant additional funds garnered from VAT have enabled the government to expand public spending, boosting the economy. 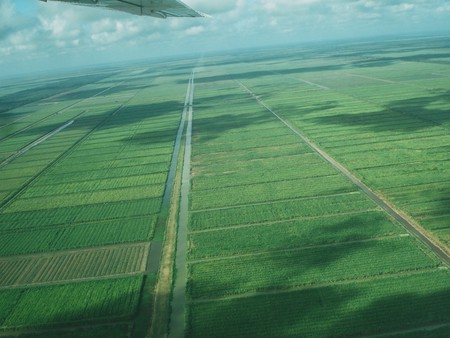 Aerial view of sugarcane fields along the coast line of the Atlantic Ocean | © Ms. Vitri Photos

Guyana is Situated Below Sea Level

Along the foreshore of the coastal plain is a seawall, a 280-mile sea defense system that protects the plain from flooding since much of the area is below sea level by almost six feet. Along the coast is a string of sluices, or ‘kokers,’ built by the Dutch master builders of sea defense, that are used to control water levels and flow rates in rivers and canals during high and low tides. Construction began in 1855, with intermittent work continuing to the present day to combat erosion and occasional breaches. Over time, the seawall has become an advertisement haven and a popular hangout spot and past time for many Guyanese, as the wall offers a beautiful view of the Atlantic Ocean with lush, cool breezes. On the weekends, the wall attracts large crowds who tread the wall to relax, picnic, jog or enjoy a fête. 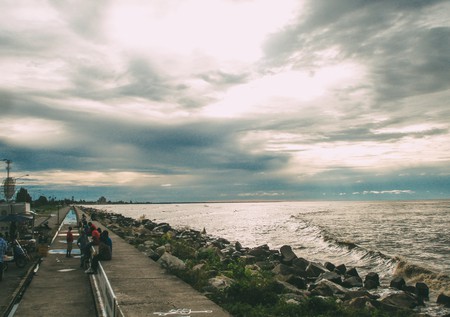 View of the seawall from Kingston, Georgetown | © Ms. Vitri Photos

The Lost City of Gold…and Rum!

You may have heard of El Dorado, but have you ever heard of El Dorado Rum? Sir Walter Raleigh made two attempts to find El Dorado, the lost city of gold. Legend has it that he thought he found this lost world at Lake Parime, in the highlands of Guyana where he discovered pieces of gold. Indeed, Guyana is quite rich in gold (and diamonds) but is also well known for its rum. El Dorado is a rum brand produced by the Demerara Distillery. From the 1600s, blended selections of different batches of rums from several stills have been aged in oak barrels to produce an array of aged rums from three to 50 years old. That’s right, 50 years! The distillery’s traditional aging method has been used in sherry and whisky production, with the richness of wooden casks marrying beautifully with the pot-still heaviness to create one of the best rums in the world. The aging process is supposedly greatly increased by the high humidity and steady temperature of the country. For example, an eight-year-old rum is claimed to have a maturity equal to that of a 16-year-old spirit produced in colder climates. Be sure to tour the distillery when you visit, there’s a complimentary tasting of select rums at the end of the tour. 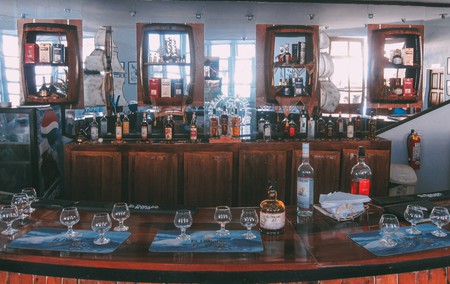 Guyana is a Parliamentary Democracy

As a former British colony, Guyana is a multi-party democracy that follows a representative electoral system where divisions in an electorate are reflected proportionately in the elected body. Under this system, if 35 percent of the electorate supports a specific political party, then 35 percent of the seats will be won by that party. Hence, all votes contribute to the result, not just a plurality or majority. The 65-member National Assembly is directly elected, with the nominee of the winning party becoming the President for five years. The National Assembly and the President constitute the Parliament of Guyana. The Parliament building is the seat of the government. Designed by Joseph Hadfield and completed in 1834, the building is an excellent example of 19th-century Renaissance architecture. Within its compounds are two cannons used in the Crimean War and a statue of Hubert Nathaniel Critchlow, the father of trade unionism in Guyana. 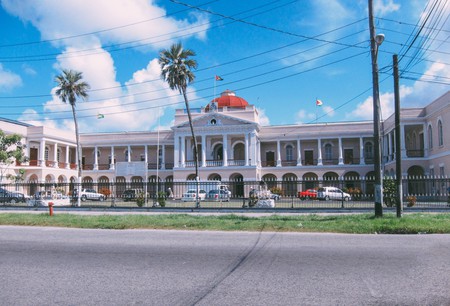 English is the Main Language

Located in the northern part of South America, Guyana is bordered by the Atlantic Ocean to the north, Suriname to the east, Venezuela to the west and Brazil to the south. Colonized by several nations since the 1600s, including the Dutch, Spanish, French and English, Guyana is the only English-speaking country on the continent. As a former British colony, Guyana remained more culturally Caribbean than a South American country. Post independence, Guyana was one of the founding nations of the Caribbean Community and Common Market (CARICOM), a politico-economic union of several countries akin to the European Union.