French Guiana’s poet and politician, Leon-Gontran Damas, was one of les trois pères (the three fathers) of la Négritude, a literary and philosophical movement begun in Paris during the early 1930s, which attacked colonialism and racism and celebrated African traditions and black culture. 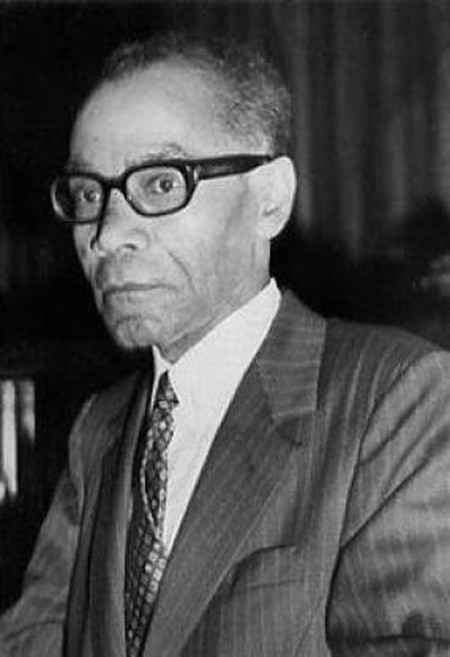 Leon Damas was born in Cayenne, French Guiana in 1912 to a middle-class family who claimed a mixture of European, Amerindian and African ancestry. He moved to Martinique and attended a French secondary school where he shared philosophy classes with Aime Cesaire, the future poet, playwright, and politician, in what became the beginning of a long friendship. He moved to France to attend higher education, and attended to the Université de Paris, where he studied law to please his parents, but also took courses in anthropology, literature, oriental languages, history and ethnology. He always displayed a profound fascination for radical politics and went on to work as both a deputy from Guiana in the French National Assembly and for UNESCO as delegate for the Society of African Culture. But his primary vocation was poetry, and while associating himself with the Surrealist movement, he started publishing poems in prestigious French literary journals such as Esprit.
At that time, during the interwar period in Paris, the black students from the French colonies started to organize a cultural movement. In 1932 the West-Indian journal Legitime Defense, created by 3 students from Martinique, Jules Monnerat, Etienne Lero and René Menil, was launched against ‘the capitalist world, bourgeoisie, colonial oppression and racism’. This created the perfect environment in Paris for black intellectualism. Two years later, three other students, Aimé Césaire from Martinique, Léopold Sédar Senghor from Senegal and Leon Damas from French Guiana, launched the journal L’Etudiant Noir (The Black Student), a publication that aimed to break down the nationalistic barriers that had existed among Black students in France. This journal expanded the focus of its predecessor from politics to culture, and is considered for many critics, the beginning of la Négritude movement.

The term Négritude (which most closely means “blackness” in English), gives its name to a movement characterized by opposition to colonialism, the denunciation of Europe‘s lack of humanity, and the rejection of Western domination and ideas. Also important was the acceptance of and pride in being black and a valorization of African history, traditions, and beliefs. Their literary style was realistic and they cherished Marxist ideas. Jean-Paul Sartre analyzed the Négritude movement in an essay called Orphée Noir. In his view, Négritude was an ‘anti-racist racism’ necessary to the final goal of racial unity. The movement was inspired by Harlem Renaissance authors, and also had other artistic influences such as jazz and poets such as Rimbaud, Mallarmé and Baudelaire. Négritude was an intellectual movement of rehabilitation, self-assertion and vindication, of the African and Afro-American cultures.

In the same line, Dama’s poetry, which reflects his commitment to the Négritude movement, talks about racism, the problems of self-identity caused by the French colonial policy of assimilation, and the weaknesses of Western culture and society. The poems from his book Pigments are a good example. But one of the things that made him unique was that he transformed the colonizer’s language into a language of his own, he forgot about what he learnt in French school about verses, meters and metaphors and used musical rhythms, humor, repetition and unorthodox typography, reflecting the spirit of his African roots. His poems were extremely modern for their time, and he soon became a icon of black poetry.
By Laura Vila