Things to Do in Quito’s Historic District 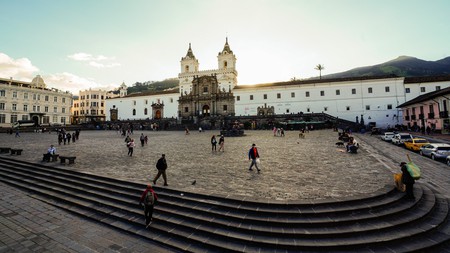 A carnival of classicism, a city within a city, the historic center of Quito is the crown jewel of Ecuador’s colonial heritage. With one of the densest concentrations of colonial architecture in South America, dating as far back as the early 16th century, it was declared a Unesco site in 1978. Here’s our guide to making the most of your visit.

Encompassing many streets, avenues, and plazas, just about anywhere you look in Quito’s historic center provides a study in civilization and style. You’ll see religious structures ranging between baroque, mannerist and Renaissance design, which were introduced by Spanish and Italian architects who arrived following the Spanish conquest, as well as neoclassical buildings that became popular towards the end of the 19th century. Between these two periods, movements such as the baroque school of Quito emerged, the influence of which is visible in many of the city’s cathedrals and churches. Combining European and indigenous motifs in a singular style that influenced architecture across the continent, the school gave much of Quito its distinct aesthetic.

You can enjoy a guided walking tour of Quito’s historic center as part of Culture Trip’s exclusive eight-day Ecuador adventure, led by our Local Insider.

If you’re visiting Quito’s historic center for the first time, the various plazas are useful reference points for exploring the city. Almost every one of them has at least one beautiful church of historic importance, and either contains, or is close to a few museums and galleries, plus many restaurants and shops. 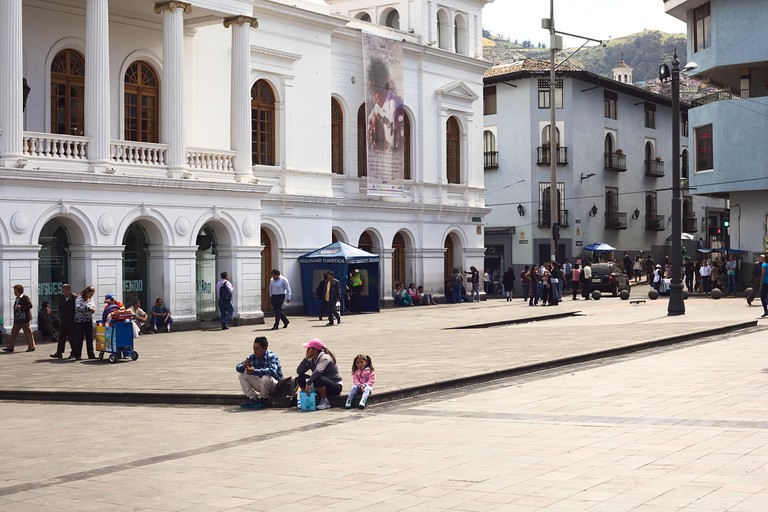 On Calle Guayaquil & Esmeraldas, the Plaza del Teatro is home to the Teatro Sucre, completed in 1886, in the Neoclassical style that was fashionable at the turn of the century. The Teatro Sucre is known for its repertoire of ballet, opera, and Broadway musicals, as well as modern theater. The plaza itself is of classical design, popular with locals, and has several small cafés and restaurants. 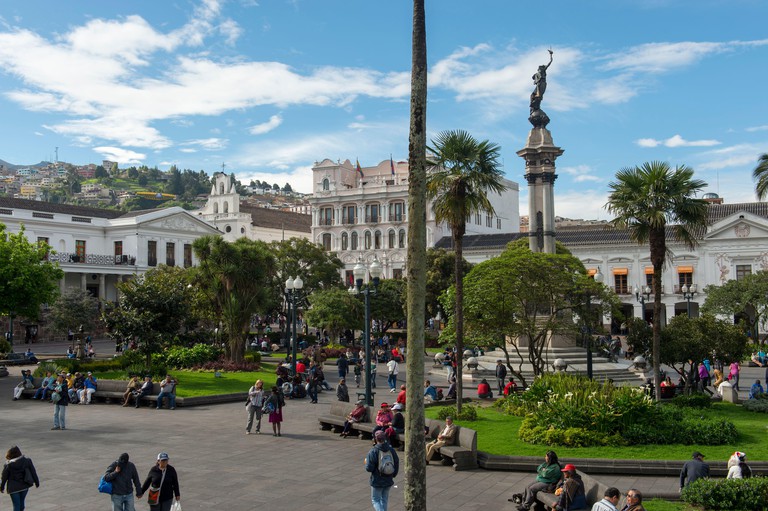 Continuing north, towards Calle Venezuela and Chile, the Plaza de la Independencia (otherwise known as Plaza Grande) is a magnificent square, featuring an impressive obelisk, designed in Italy, and flanked by monuments of notable historic value, such as the 17th-century Metropolitan Cathedral of Quito, the Presidential Palace, and the luxury Hotel Plaza Grande, built in 1930. 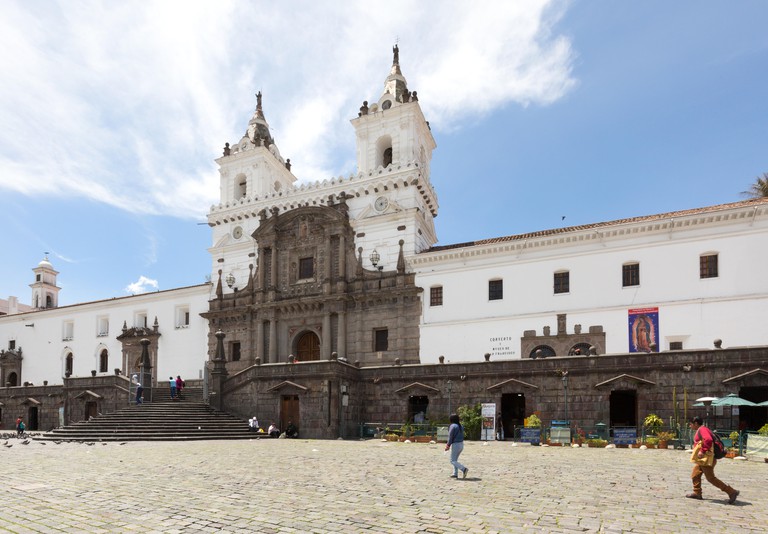 Head northwest on Chile and then south on Cuenca, and you’ll arrive at the Plaza de San Francisco, whose church and monastery, with its curved steps, is one of the city’s most renowned architectural wonders. Construction began in 1534, making it the oldest church in Ecuador. At its base, there’s a café, restaurant, and artesian shop overseen by the fair-trade Tianguez foundation. The winding catacombs within the operation, showcasing indigenous art, are worth walking through even if you don’t plan to purchase anything. 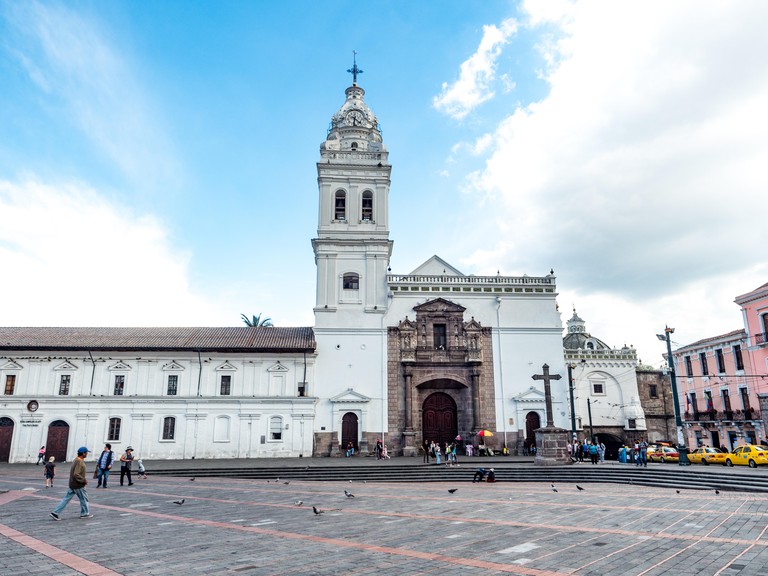 If you depart from the Plaza de San Francisco on Simon Bolivar and head west five blocks, you will arrive at the Plaza Santo Domingo. Besides its 16th-century church, this plaza also features the Fray Pedro Bedón Museum of Art.

Completed in 2016, this new plaza adds a modern touch to Quito’s historic district. Roughly halfway between the Plaza del Teatro and the Plaza de Independencia, on Mejia, between Juan Jose Flores and Guayaquil, it’s a pleasant place to take a break while walking to and from the many attractions in the area.

Within Quito’s historic center, there are more than a dozen museums. Here, we’ve picked out the most interesting ones to visit. 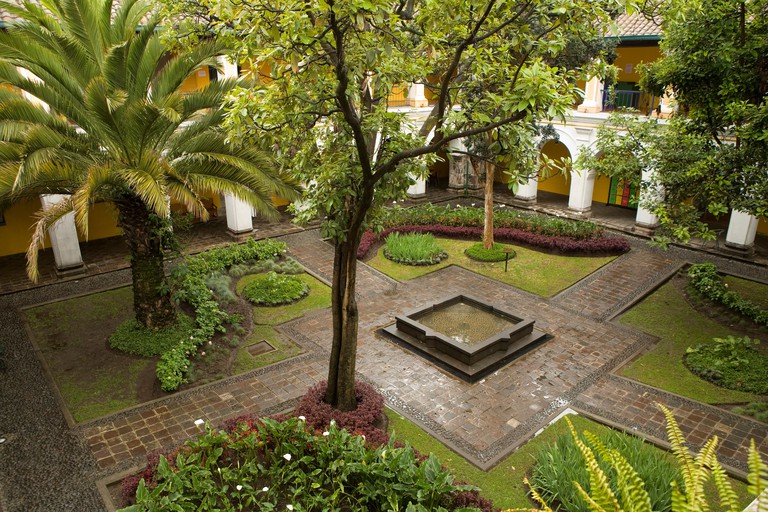 An excellent introduction to Quito, the Museo de La Ciudad – formerly a 16th-century hospital – with its 10 exhibition halls, chronicles the city’s history, from the pre-Columbian era to the 19th century. There is also a new, modern art gallery showcasing the work of contemporary Ecuadorian artists.

The former mansion of the great leader, along with Simon Bolivar, of the war for independence from Spain, this museum features the authentic furnishings that belonged to Marshall Antonio José de Sucre and his wife, Mariana Carcelén, as well as original period maps, firearms, and military equipment. 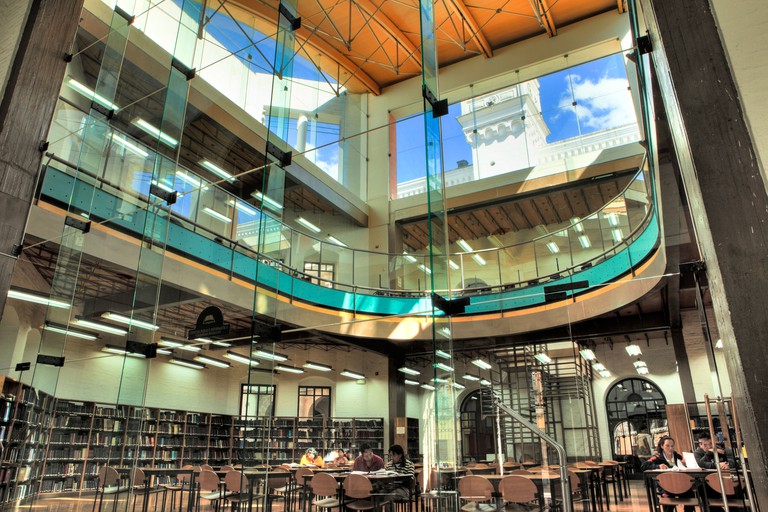 This resplendent work of architecture dates back to 1622 when Jesuits built a university on the corner of land where Quito’s Centro Cultural Metropolitano now stands. In the centuries that followed, it served as the setting for many momentous events, including the spot where Ecuador was officially recognized as an independent nation. It now serves as an anthropological and cultural showcase, with its multiple exhibition halls, as well as a library.

Adjacent to the Centro Cultural Metropolitano, this museum features numerous rooms of wax figures in authentic period dress recreating important moments in Ecuador’s fight for independence, including massacres. Also displayed are many original works of art and weapons from the 18th and 19th centuries. 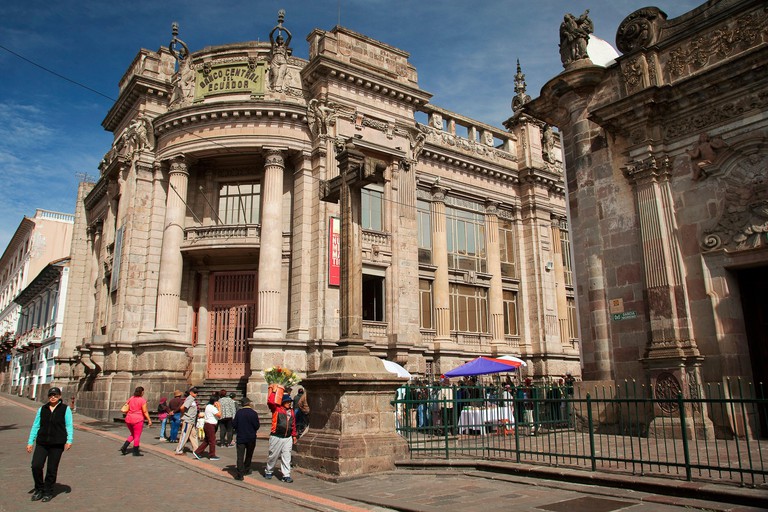 Right behind the Centro Cultural Metropolitano on Garcia Moreno, this coin museum is housed in the former location of the Banco Central (Central Bank) of Ecuador. The building was constructed in the late 19th century by the Swiss-Italian Durini brothers in the neoclassical style of the time. It showcases the history of currency in Ecuador, from the Spanish colonial period to the last days of the Ecuadorian sucre before the country switched to the American dollar. The collection of coins displayed are priceless, as is the information as to their history and manufacture.

Museum
Facebook
Email
Twitter
Pinterest
Copy link
Share
This is one of the best and most comprehensive displays of authentic Pre-Columbian art, pottery, and religious iconography in the city, showcasing over 5,000 archaeological pieces within a traditional 17th-century colonial house.

Born into a high-ranking aristocratic family in 1901, María Augusta Urrutia never had children, and after the death of her husband in 1931, as a devout Roman Catholic, she dedicated her life to serving the poor in Quito, especially children. Her former home is now preserved as a piece of history, giving visitors an opportunity to see daily life in Quito in the first half of the 20th century. 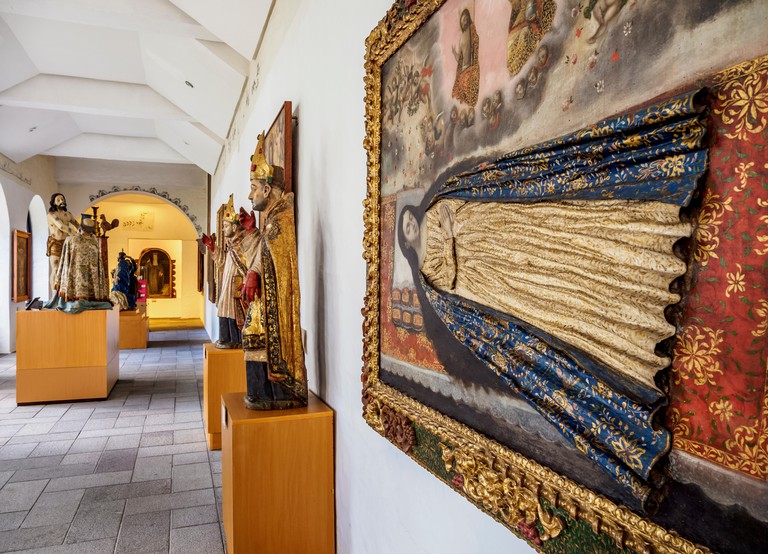 The Fray Pedro Gocial is the official museum of the Church of San Francisco which faces San Francisco Plaza. It features beautiful works of religious art across the centuries from Ecuador’s Catholic past, including from the Quito School, which fused Baroque and native elements.

This museum of colonial art features works from Manuel Chili (better known as Caspicara – a 17th-century Ecuadorian sculptor known for his florid, baroque, and sometimes very bloody works), Miguel de Santiago, and Bernardo de Legarda, among many others.

Quito’s historic district features an abundance of colonial churches, which are impressive sights to behold both inside and out. These two, in particular, are essential stops when walking through the area. 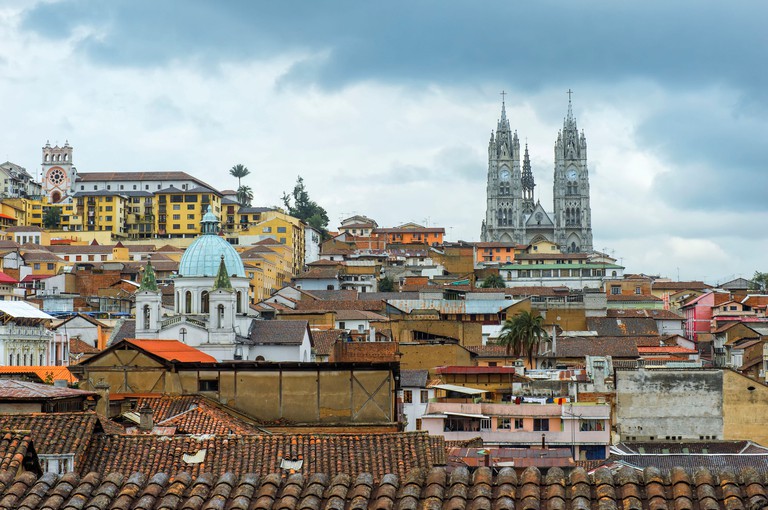 © Imagebroker / Alamy
Quito’s largest church was inspired by Bourges Cathedral in France and was constructed between 1887 and 1909. However, urban legend has it that it will only be fully completed shortly before the end of the world. For a small fee, you can go inside and climb to the top, where you’ll be rewarded with magnificent aerial views across the city.

Church
Facebook
Email
Twitter
Pinterest
Copy link
Share
With its elaborate gold leaf interior, the Church of La Compañía de Jesús (constructed between 1605-1765) is among the most striking in Ecuador. Mainly built in Spanish baroque style, it also incorporates French and Italian baroque influences, as well as elements of Moorish design.

Other areas of interest 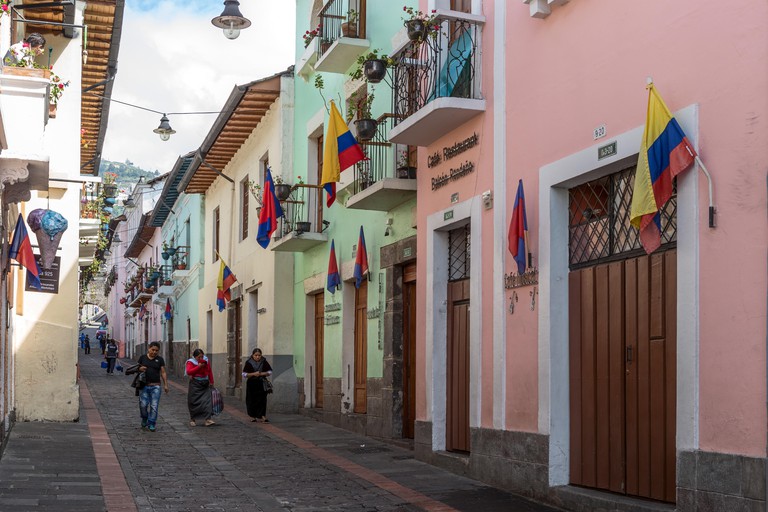 Only recently restored to its original, colonial-era character, for many years La Ronda was a bohemian neighborhood inhabited by many of Ecuador’s most renowned poets, artists, and political activists. Now, its lantern-lit streets contain a flourishing mix of bars, restaurants, craft shops and art galleries. 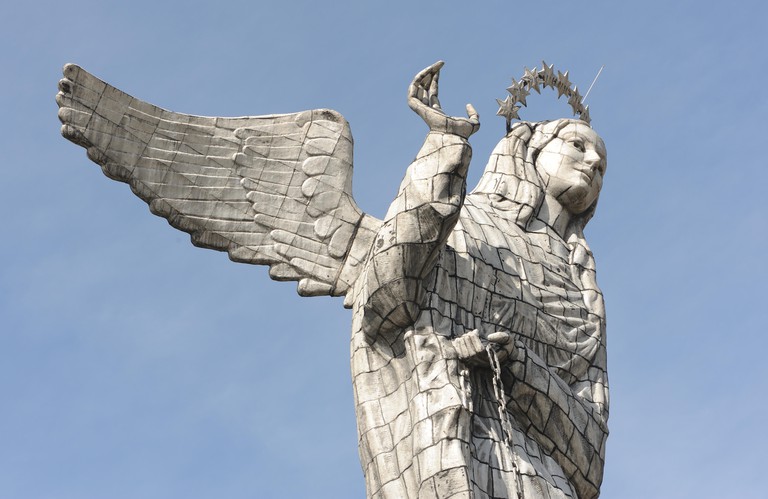 Just south of the historic district lies Panecillo hill, atop which stands a gargantuan statue of Mary, the Mother of God – the only one in the world that features the Madonna with angel wings and a crown of stars. You can walk from Garcia Moreno towards a path that takes you up to the very top.